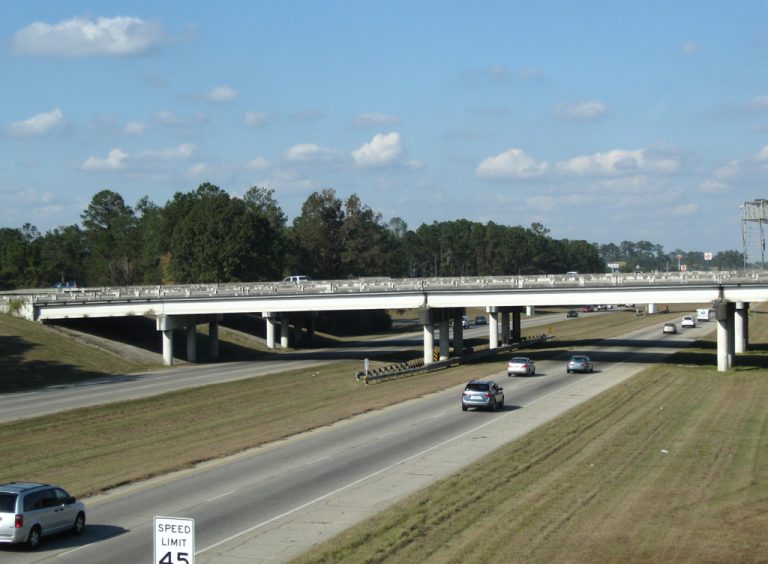 U.S. 190 at Interstate 12. U.S. 190 follows a freeway linking the north end of Lake Pontchartrain Causeway with I-12 between Mandeville and Covington. Photo taken November 20, 2008.

Before the span's completion, a ferry system shuttled travelers between West and East Baton Rouge Parishes across the river. The first ferry lease was granted on April 4, 1820. The idea for a bridge crossing the Mississippi River saw origins as early as 1913 in the form of plans for a railroad span. By 1931, preliminary plans and cost estimates for a combination road and railroad bridge were submitted to the U.S. War Department for permit. From there funding issues arose, delaying serious planning and construction of the bridge until 1936.

Rumors speculated that Huey P. Long personally picked the location of the bridge and the planned height as a way to stymie ocean going vessels from traveling further north then Baton Rouge, thus adding to the city's appeal as a port town. Details released regarding the placement of the span on the day of dedication however indicate that the bridge location was chosen over the deepest waters of the Mississippi River, four miles north of the city. The depth of the water here was sufficient enough to allow vessels traveling to and from the Standard Oil and Solvay Process docks. Waters further north toward Saint Francisville were laden with shoals that would not permit larger ocean going ships from navigating the river. Additionally it was stated that the lower vertical clearance resulted in a savings of $2.5 to 3 million due to the need for shorter approaches. The bridge work order was placed on June 28, 1937. When finished, the cantilever-style bridge totaled 12,211 feet in length at a cost of $8,360,718.89. Three of the four piers extend to 180 feet in depth for an overall length of 415 feet. Nine workers lost their lives in construction of the bridge.1

As for the bridge color, the orange color scheme of the span stems from the bauxite produced at the Kaiser Aluminum plant, located directly under the east approach. By the mid-1960s the remainder of the bridge was painted a similar color so that the bauxite would blend in with the entire bridge. The original railings of the combination bridge featured decorative cast-iron "fleur-de-lis." Over time these ornaments began to fall off and a more recent restoration saw the complete removal of the remaining pieces with a railing replacement.1

A pair of through truss bridges carry U.S. 190 across the Atchafalaya River at Krotz Springs. Each span carries two lanes with full right-hand shoulders and narrow left-hand shoulders. The U.S. 190 spans are one of five Atchafalaya River crossings in southern Louisiana. The others are Louisiana 1 at Simmersport, Louisiana 10 at Mellville, Interstate 10 (The Atchafalaya Swamp Freeway), and a pair of spans at Morgan City (U.S. 90 and Louisiana 182). The U.S. 190 bridges opened in 1973 and 1988 respectively. The two bridges total 3,402 feet in length with a 34.1 foot wide decks.2

Looking east from within the folded diamond interchange joining U.S. 190 with LA 105 at the Atchafalaya River Bridges. Photos taken 10/13/03.

There are three business loops for U.S. 190 in Louisiana. The route through Baton Rouge constitutes an L-shaped alignment southward from Airline Highway along side U.S. 61 Business on a combination of Scenic Highway, Chippewa Street, I-110 to Downtown Baton Rouge. Florida Boulevard returns the business route east to U.S. 61/190 (Airline Highway) at a full-cloverleaf interchange.

The city of Covington is home to a 3.31-mile business loop following 21st Avenue and Boston Street through Downtown while U.S. 190 bypasses the street grid to the north. The route shares a 1.3-mile overlap with LA 21 from Tyler Street to the U.S. 190 connector at the east end.

The third U.S. 190 business route follows Fremaux Avenue east from U.S. 11 (Front Street) in Downtown Slidell to Interstate 10 and Shortcut Highway to U.S. 190 (Military Road) outside the city. A diamond interchange opened between I-10 and U.S. 190 Business in September 2008.