Home » On The Road » Hurricane Katrina Recovery
Previous Next

This past weekend afforded me with the opportunity to check on the status of some upper Gulf Coast road projects related to the recovery from Hurricane Katrina. The August 29, 2005 landfall of the historic storm not only devastated the New Orleans and Mississippi coastal area homes and businesses, but also washed out several key stretches of highway infrastructure. Included in the storm’s fury was the destruction of the U.S. 90 spans over both Biloxi Bay at Ocean Springs and St. Louis Bay and the collapse of the Interstate 10 twin spans over Lake Pontchartrain. Now over two years removed, recovery efforts are well underway!

Beginning in the east, the U.S. 90 Ocean Springs Bridge is finally open to traffic after 18 months of work. Initially opened to traffic on November 1, 2007, the bridge presently carries two lanes of traffic on a span that eventually will accommodate six lanes and a pedestrian/bicycle path. The span travels much higher than the original four-lane crossing, thus negating the need for a draw-span. See MDOT’s BiloxiBayBridge page for more details on the construction, which is slated for completion on April 16, 2008, with a full bridge opening on March 28, 2008. Work began on June 16, 2006. 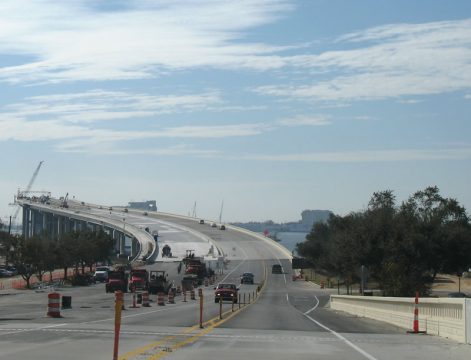 U.S. 90 first spans the CSX Railroad line over an arm of the Old Fort Bayou before ascending along the high-level Biloxi Bay Bridge. Features of the new span include a retro-style guard rail and light yellow paint motif.

Some new development has occurred on the stretch, but much of it remains abandoned or clear of any structures. One such structure that was replaced is the St. Louis Bay Bridge of U.S. 90. Crews opened half of the eventual four-lane bridge on May 17, 2007, linking the city of Bay St. Louis with Pass Christian. As of December 10, 2007, the span still carries two-lanes and a 12-foot pedestrian/bicycle path. 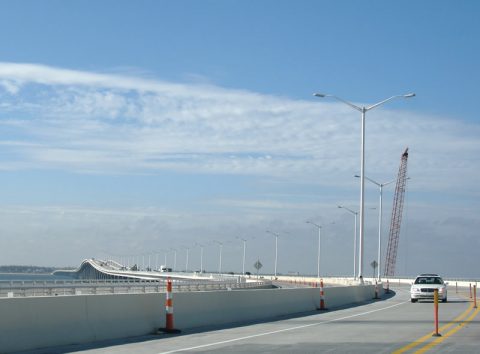 U.S. 90 westbound on the St. Louis Bay Bridge – December 10, 2007. Traffic shifted from the completed eastbound lanes onto the westbound lanes on November 26, 2007 so that contractors could finish the final elements of the bridge including lighting, signs, and railing.

Construction on the St. Louis Bay Bridge commenced on June 7, 2006, just three months after demolition began on the remnants of the original span. U.S. 90 originally traveled along a two four-lane draw bridge, but with an 85 foot clearance on the new span, motorists will not longer suffer delays from marine traffic below. The $266.8 million project is near completion.

U.S. 90 remains a somewhat lonely road from its partition with Mississippi 607 in western Hancock County. Continuing from there through the Pearlington area, a series of truss, lift, and pony truss bridges carry the two-lane highway through bayou country. Once U.S. 90 nears the Rigolets, a waterway that joins Lake Pontchartrain to the west with Lake Borgne to the east, another bridge project is well underway. Crossing the Rigolets is the narrow two-lane Fort Pike Bridge, a truss with a swing span first opened to traffic in 1930.

The stretch of U.S. 90 suffered damaged due to Katrina’s storm surge, however the bridge suffered limited damage structurally (but major damage to its electrical system). LADOTD’s replacement project of the aging span was already underway when Hurricane Katrina made landfall. However contractors working on the span were pulled away from the project for emergency repairs to the Interstate 10 bridges over Escambia Bay after Hurricane Ivan. 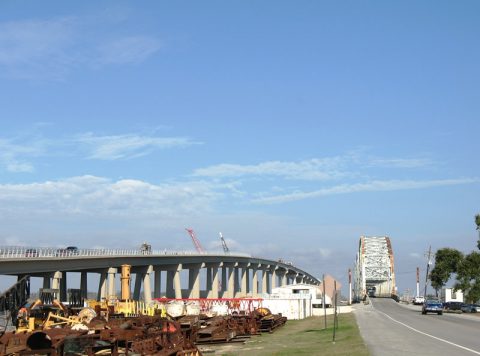 Looking east at the original Fort Pike Bridge and its future replacement at the Rigolets in eastern Orleans Parish.

A three-year construction project is underway to build a 5,500-long span with a 70 foot clearance. No longer will motorists experience anxiety when crossing the waterway on 10 feet lanes as the new bridge will carry two 12 foot lanes with 12 foot shoulders. Work began on the $50.6-million project November 2004 with an expected completion by June 2008.

Another of the three crossings between Orleans and St. Tammany Parish is that of the twin bridges of Interstate 10 over Lake Pontchartrain. These, like those of Interstate 10’s crossing of Escambia Bay in Florida, suffered the same fate of the U.S. 90 bridges in Mississippi with storm surges higher than the bridge itself toppling the concrete decks into the lake waters below. For a short time period, there was no Interstate 10 crossing between New Orleans and Slidell, with the narrow U.S. 11 bridge carrying the entire load. However an interim solution arose that salvaged submerged bridge deck components in conjunction with temporary metal-deck trusses.

Currently Interstate 10 traffic still utilizes a combination of the original bridges and those temporary metal trusses, similar to what travelers endured for several years at Pensacola. Construction is well underway however on the eventual replacement of the original four lane crossing with a much higher set of three lane bridges along the eastbound side. Costing $800-million, the twin-span replacement project will result in bridges ranging between 15 and 28 feet higher than the original bridges. Opening of the future westbound bridge is expected by late 2009. That span will carry four lanes of travel as crews work on the two-year completion of the new eastbound bridge. 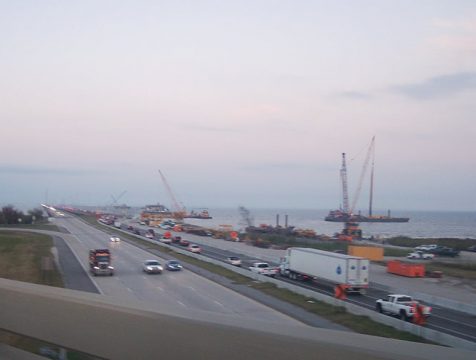 Four overall lanes of traffic are still accommodated along the 1965-built bridges. When the westbound bridge opens in 2009, demolition will begin on the original spans.

In related news, crews put the finishing touches on the new westbound bridge carrying Interstate 10 across Escambia Bay this week (December 12, 2007). Work was planned for completion by Christmas, but now cross country travelers and commuters alike will reap the benefits of the three-year $245-million construction job done in the wake of Hurricane Ivan. The new spans travel 25 feet higher than original shoulder less two-lane bridges. Drivers may now safely span Escambia Bay along three overall lanes per direction that includes shoulders on both the inside and outside lanes. 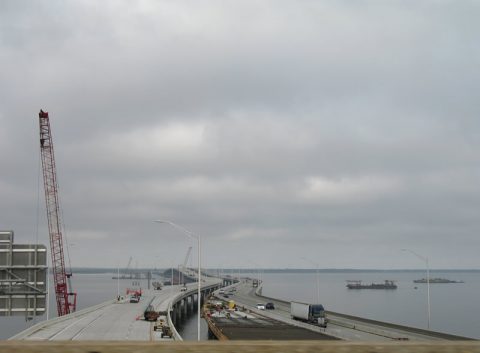 A look at the Escambia Bay Bridge project just four days prior to the opening of the new westbound bridge. Portions of the original bridge are being used to create an artificial reef in the offshore waters of the Gulf of Mexico.

As it stands now, the bridge carries six overall lanes across the bay. Eastbound traffic reduces to two lanes once reaching land in Santa Rosa County. The third westbound lane becomes exit-only for the U.S. 90 (Exit 17) folded-diamond interchange. It is expected that Interstate 10 will be widened to six-lanes overall between Exit 17 and Exit 13 (Florida 291 / Davis Highway) in the near future.