Over the holiday weekend, I took a trip that concentrated heavily on US-50 from I-15 in Utah to Carson City. This batch barely gets us there, as we head up the US-91 corridor (approximately) from San Diego to Utah, and then turn west, stopping in Ely, Nevada for the night.

those that click on the large versions of the photos may notice… new camera! Larger pictures for your enjoyment. When my D50 died at 99872 exposures, I upgraded to the D5000. This trip served to field-test it in a variety of conditions. 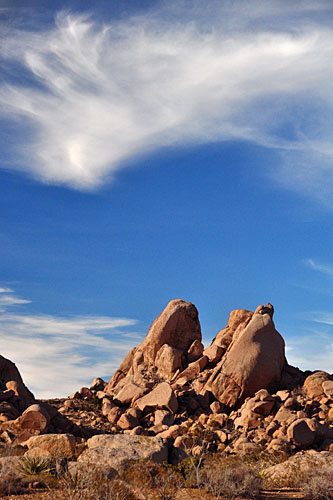 Pointy rocks and high clouds, by the side of the Kelso-Cima Road, which is a very old US-91 alignment. Before they built the road in the 30s that would be upgraded to I-15 in 1962, a somewhat more indirect highway followed the railroad between Cima and Kelso, and that was US-91. 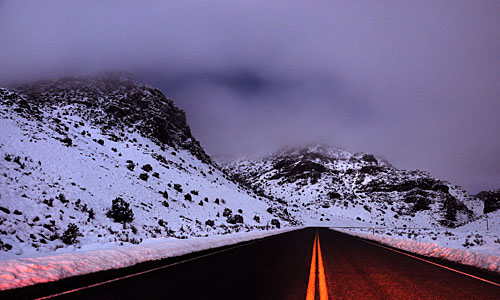 US-50 in western Utah. 1am on a foggy night. As there was no place to pull over, I stopped the car in the middle of the road and set up the tripod next to it. No cars came in the six or seven minutes I was stopped. Indeed, no other vehicles between Hinckley, Utah and Majors Junction, Nevada – over 100 miles! 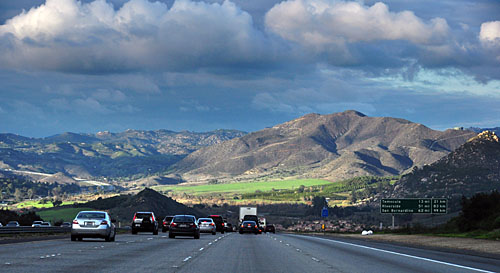 Altogether too much traffic on I-15 as we depart heading towards Riverside County. 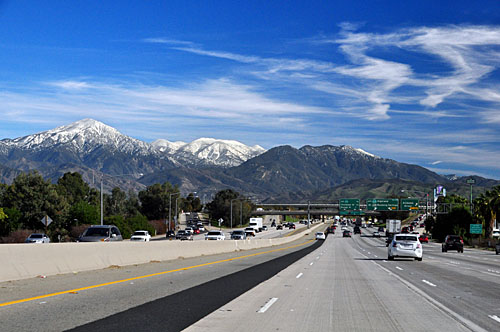 Taking I-10 instead of I-15 or I-215 gets us off the main road with all the Los Angeles to Las Vegas traffic. While you wouldn’t think of putting Christmas and gambling in the same sentence… apparently, half of LA’s population did! 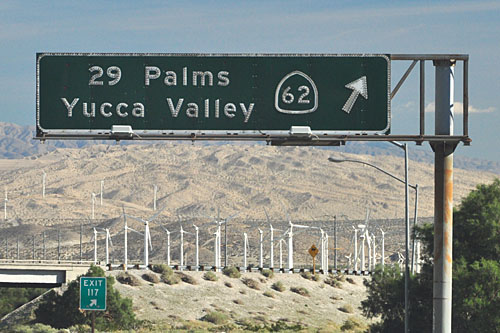 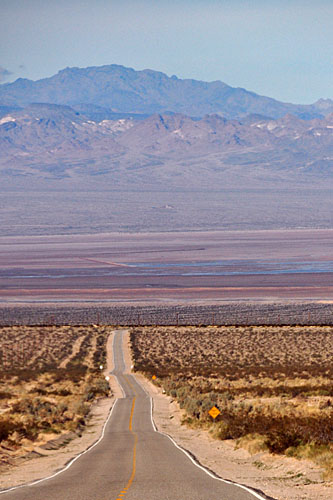 And now, the Amboy Road, which connects Twentynine Palms to Amboy. We’re taking a somewhat circuitous route, but at least the traffic levels are favorable. 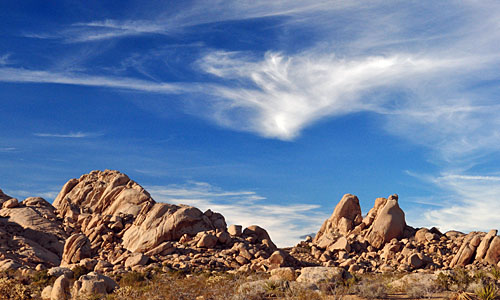 Kelso-Cima Road again, but this time with some more context. 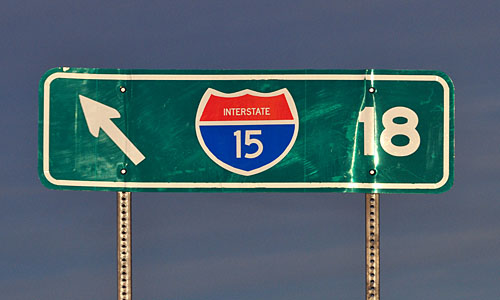 I think San Bernardino County is responsible for this sign. 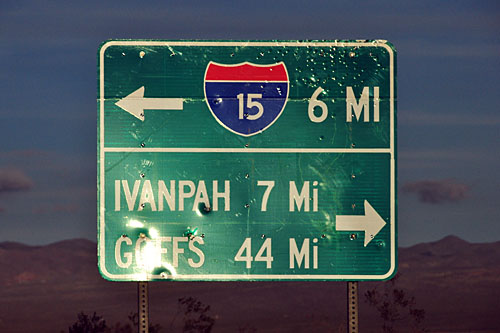 The sign that this replaced survives: it has “US 91/466” to the left, and is a 1950s porcelain Auto Club sign: white with black legend. 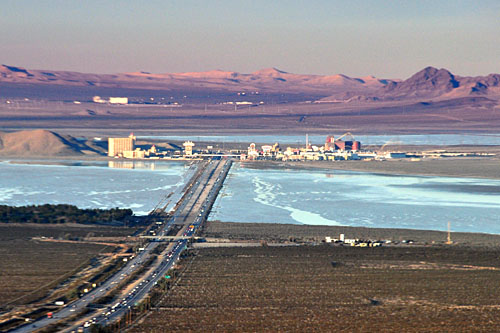 We’re back on I-15, as that is the only way into Nevada in the area. The town of Primm, formerly known as State Line, is in the distance. 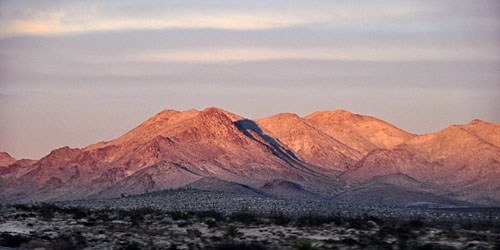 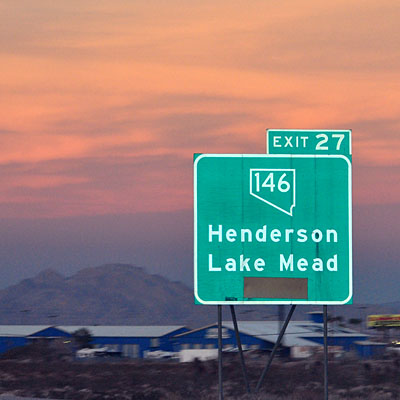 A bit of poor planning gets us sunset at the worst of Vegas traffic. Oops. 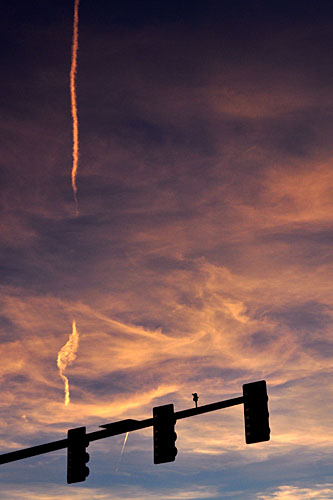 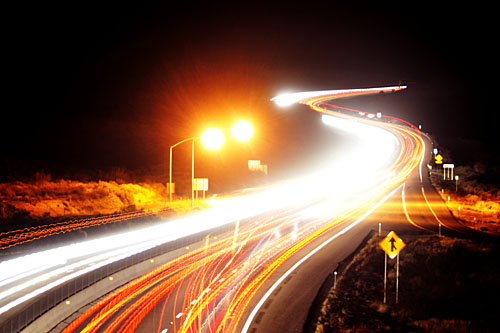 I’ve taken more realistic photos of I-15 through the Virgin River Gorge on more than one occasion, but this one came out so over-the-top misexposed that I just had to keep it. About 80% of this photo’s pixels are railed to one maximum or another. Gotta love it. 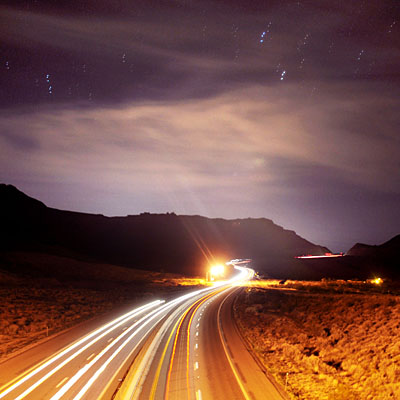 There we go – a much better exposure. Or, combination of exposures as the case may be. The very discontinuous star trails should give a good idea as to which photos of a series I selected to combine.

The I-15 routing through the gorge is one of the rare examples of an interstate that replaced an old two-lane road, making the trip more scenic in the process. I-70 vs US-50 between Green River and Salina, Utah is another example, as is I-68/US-40 at Sideling Hill in Maryland. 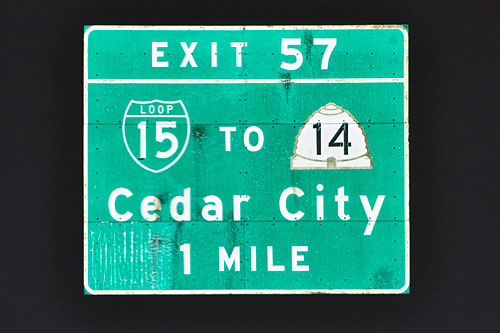 And we’ve made it to Utah. Don’t tell Enterprise, as they do not allow the car past Nevada and Arizona. Note the “loop 15” shield – this is a direct replacement of an older button copy sign, which did not have the resolution for a detailed Business Loop 15. 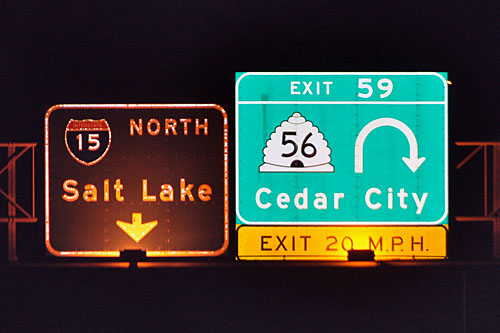 And some actual button copy. This, and a corresponding sign southbound, are – I believe – the only button copy signs left on I-15 in Utah. 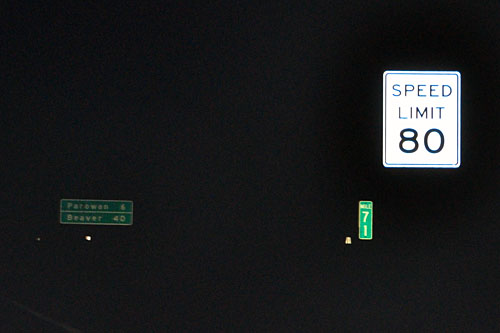 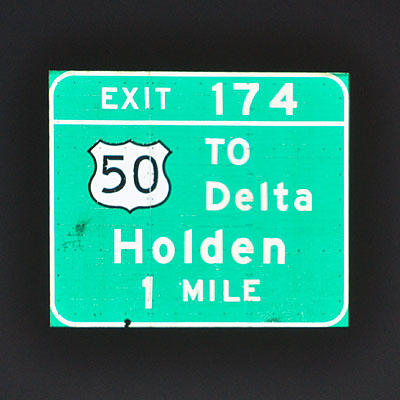 This is where we get off I-15 and head west on US-50 all the way to Carson City, Nevada. 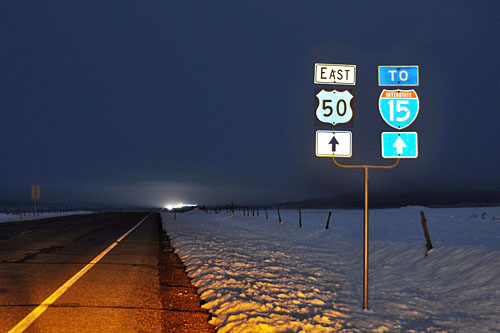 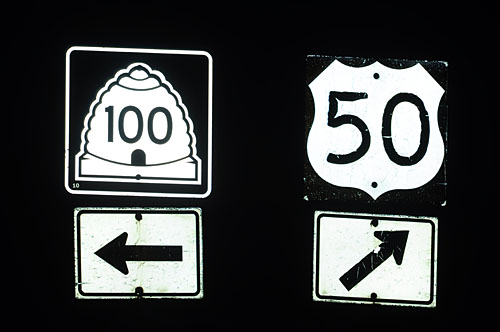 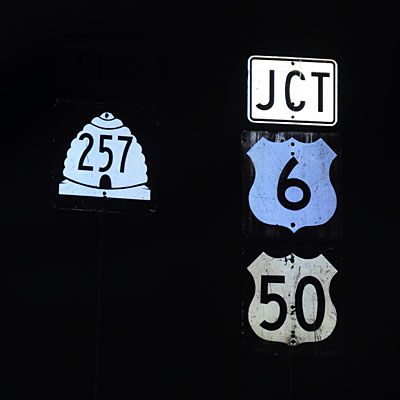 Standard-font 1961 spec shields are not difficult to find in Utah. 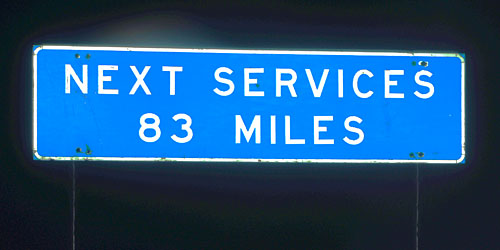 We leave Hinckley with an eye on the gas gauge. Past here, there is gas only at the state line (83 miles away), and then Ely, Austin, Middlegate Junction, and Fallon as we cross the most uninhabited portions of Nevada. 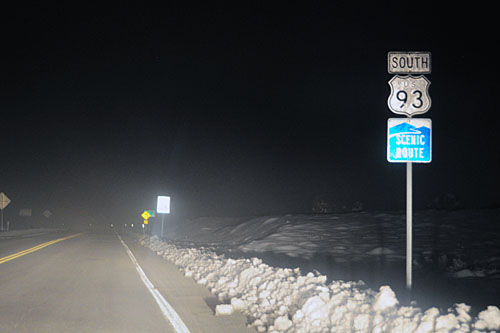 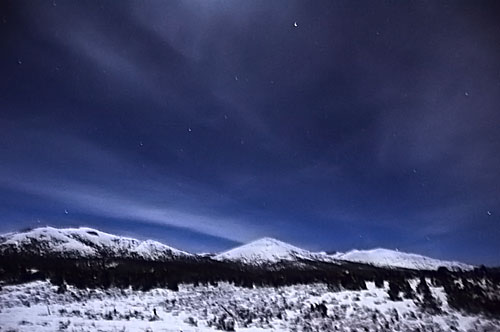 I should’ve stopped for this one, as opposed to shooting a hand-held 5 second exposure out the window. The view is from a sweeping curve along Connors Pass, and there was absolutely no place to pull over and visibility for stopping in the road… and surprisingly many vehicles at that time of the night, so I kept going.

At small size, it looks all right, but the full-size version is very blurry. It should actually be fairly easy to get rid of the motion blur: all the stars should be points, so taking a star track and inverting it should give us the appropriate deconvolution filter. Quick, where’s my knowledge of Fourier transforms?

And that does it for the first day of the trip. Next up: US-50 across Nevada.