Just shy of its two year anniversary, work on the 21-mile stretch of Interstate 4 to add toll express lanes through the Orlando area is progressing at a steady pace. The Ultimate I-4 project is advancing in various stages along its entire stretch and is still on goal for a 2021 completion. Broken down into four region-based segments, the majority of the work on the $2.3 billion project is being concentrated at several key interchanges and along several sections of I-4.

Work at the west end of the project (near the attractions area) is progressing at a steady clip, with majority of the construction occurring at the Kirkman Road (Florida 435) exchange and the new Grand National Drive overpass. Traffic along Kirkman Road north recently switched to a new overpass extending across existing I-4 west and the future express and eastbound lanes. Subsequent lane and ramp work for the mainline and express lanes are also progressing. 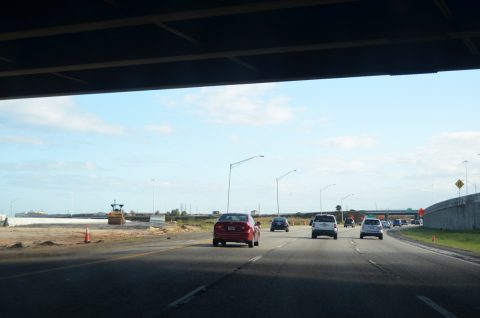 As motorists travel under Universal Boulevard, work can be seen slowly advancing on what will become the new eastbound mainline for I-4 at Florida 435 (Kirkman Road). The existing sweeping curve that carries traffic east through the interchange will be eliminated, replaced with a linear footprint for the I-4 mainline and express lanes through the exchange. Photo taken 01/14/2017.

The new Grand National Drive overpass is also taking shape with work continuing on the abutments that will support the new structure over the I-4 mainline. This new crossing will finally provide a link between Major Boulevard and the existing Grand National Drive, making the easternmost International Drive area more accessible to Kirkman Road (SR 435) and the Universal Orlando Resort area. Once complete, Grand National Drive will only have direct ramps to the future express lanes. 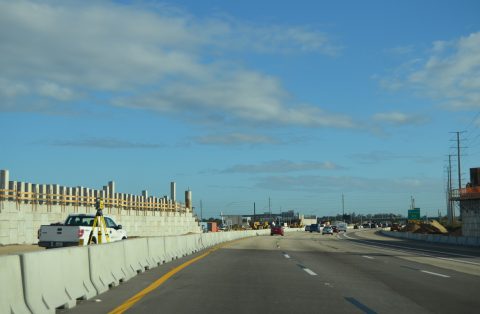 Survey work goes on in the vicinity of the concrete abutments under construction that will support the Grand National Drive structure over I-4. The northern extension of Grand National Drive will see a direct connection to Major Boulevard once complete. Ramps will also connect to the I-4 Express Lanes, but not to the mainline itself. Photo taken 01/14/2017.

Initial work has also begun on the future modified trumpet interchange between I-4 and the Florida’s Turnpike. Other improvements at the exchange will include added lane capacity along the ramp from I-4 west to the Turnpike as well as other ramp modifications. 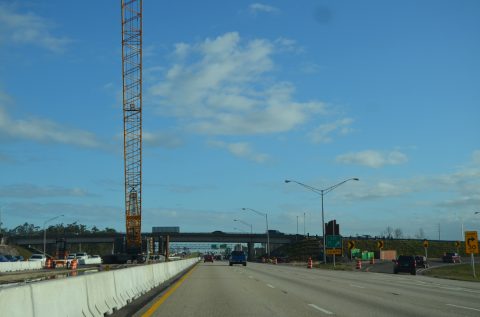 A crane has been placed to begin pile driving for a new crossing of the connector road between Florida’s Turnpike and Interstate 4. The new span will exist adjacent to the existing one with an additional lane to accommodate traffic from I-4 west to the Turnpike. Photo taken 01/14/2017.

Within the Downtown section, changes are slowly taking shape between Exits 80AB (U.S. 17/92/441) and Exit 82A (Florida 408), primarily with earthwork in the vicinity of the existing mainline. As part of the overhaul of I-4 through this area, the westbound lanes will shift slightly southward through the U.S. 17/92/441 (Orange Blossom Trail) interchange, allowing room for a new right-hand ramp connection between I-4 west and OBT south. Work is also progressing at both the Michigan and Kaley Street half-diamond interchanges, primarily along the west side. 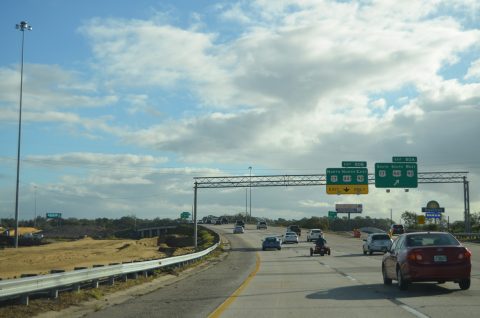 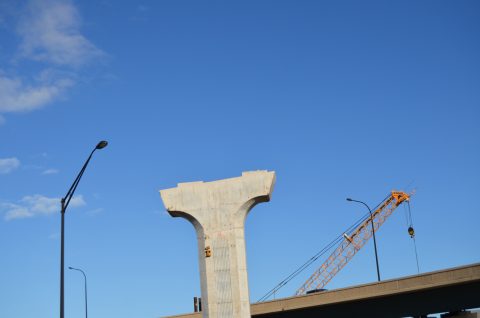 Construction is also getting underway at the I-4/SR 408(East-West Expressway) systems exchange (Exit 82A), with the inclusion of high support piers for future ramp connections. As pictured here, this pier will eventually support the ramp from I-4 east to SR 408 west. Photo taken 01/14/2017.

Continuing north through the Downtown area, the next segment seeing extensive construction is from the U.S. 17 & 92/Florida 50 (Colonial Drive) exit through to Florida 423 (Lee Road). Bridge work is well underway for the new I-4 east mainline over Ivanhoe Boulevard and Lake Ivanhoe, as well as mainline work through to the Fairbanks Avenue (Exit 87) interchange. Progress is also being made on the realignment of the curve south of Lee Road (Exit 88), which will provide better geometry through that area. Temporary ramps have also recently opened along I-4 east at Princeton Street, Fairbanks Avenue, and SR 423 (Lee Road). 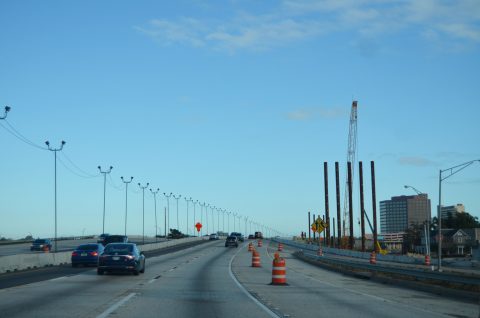 A future ramp carrying traffic from Amelia Street over Colonial Drive (U.S. 17/92 & SR 50) takes shape along I-4 east. The interchange between the freeway and Colonial will see the removal of its loop ramps, converting it into a tight urban interchange. Photo taken 01/14/2017. 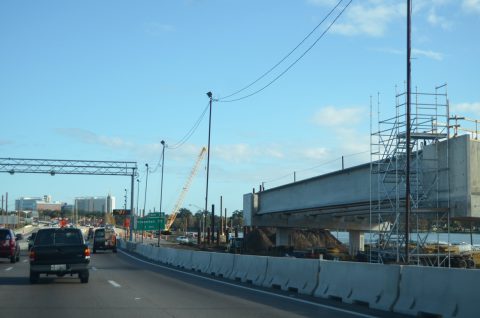 Closer look of construction of the new Interstate 4 eastbound mainline over Lake Ivanhoe. The tolled express lanes will follow the original footprint of I-4 through this area while mainline traffic will be shifted onto the new structures. Photo taken 01/17/2017.

Progressing north from Winter Park into the Altamonte area of the project, the next major hub of construction lies at the State Road 414 (Maitland Boulevard) exchange (Exits 90AB). Road work involves the removal of the ramp between I-4 east and SR 414 west and the inclusion of loop ramps. Free-flowing ramps will connect SR 414 east and west to I-4, thus eliminating two existing traffic signals. As part of the modifications to the exchange, new ramps are also being constructed providing direct access from Interstate 4 to Sandspur Road (I-4 east) and Lake Destiny Drive (I-4 west). Completion of the Maitland Boulevard interchange is slated for 2018. In addition, work is also moving forward along SR 414 (Maitland Boulevard) west of I-4, converting the existing at-grade intersections with Keller Road and Maitland Summit Boulevard into urban style interchanges. This upgrade is being done in conjunction with the overall Ultimate I-4 project. Once complete, Maitland Boulevard will be an expressway between I-4 and State Road 434 (Forest City Road), leaving only the sections from SR 434 west to U.S. 441 (Orange Blossom Trail) and from just east of Sandspur Road to U.S. 17 & 92 as at-grade. 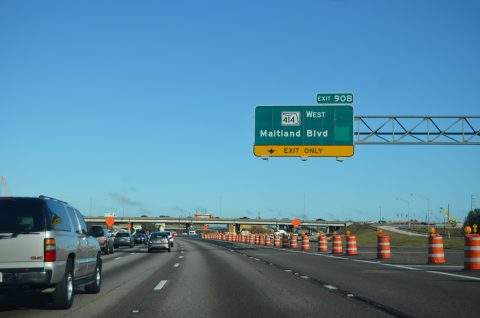 Traffic bound for Florida 414 (Maitland Boulevard) west must now continue ahead along I-4 east to access the state road, as the existing ramp has been severed to allow continued work on the new Maitland Boulevard westbound overpass. A loop ramp will eventually make the movement between the two. Photo taken 01/14/2017. 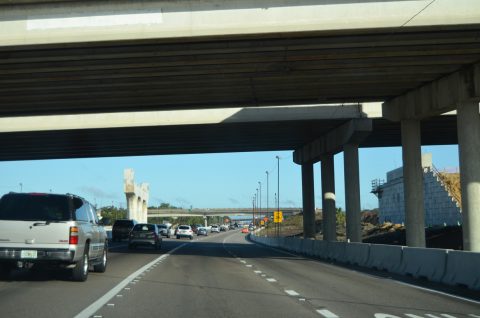 Closer view of the new westbound mainline overpass structure as it is being constructed across Interstate 4. The existing flyover (now closed) from I-4 east to SR 414 west can be seen in the distance, and will be removed at a later construction phase. Photo taken 01/14/2017. 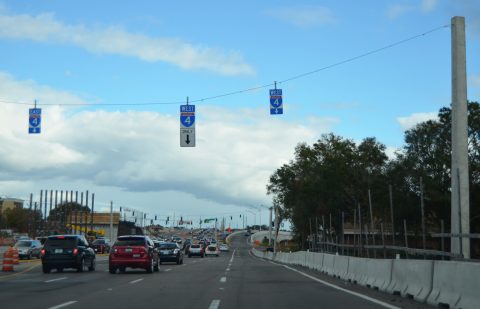 North of the Maitland Boulevard exchange, work takes shape to replace the Wymore Road overpass, as well as some preliminary land clearing and drainage work within the median to the south of Florida 436 (Semoran Boulevard). Work is also well underway to replace the Central Parkway overpass to accommodate the future express lanes. Mainline and interchange construction along this stretch should begin once utility and drainage work is completed. 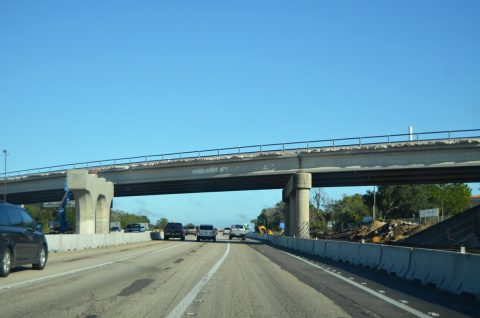 Motorists travel under existing Wymore Road as work continues on its replacement span. The new crossing will be longer to accommodate the ultimate I-4 configuration. Photo taken 01/14/2017. 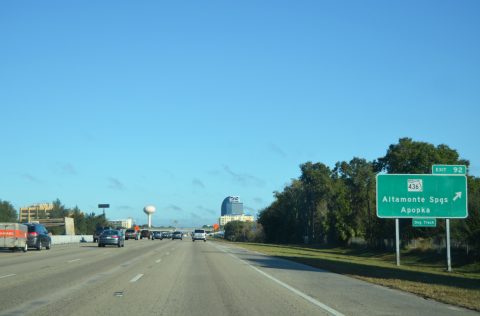 Other than initial drainage work within the existing median of I-4, no real significant road work has commenced between Wymore Road and the State Road 436 (Exit 92) interchange. Photo taken 01/14/2017.