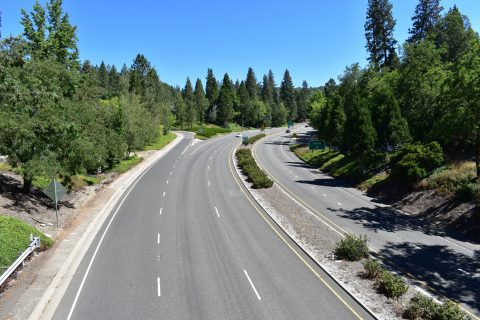 SR 49 separates from SR 20 east at the north end of the Golden Valley Freeway and Uren Street in Nevada City. Photo taken 07/11/18. 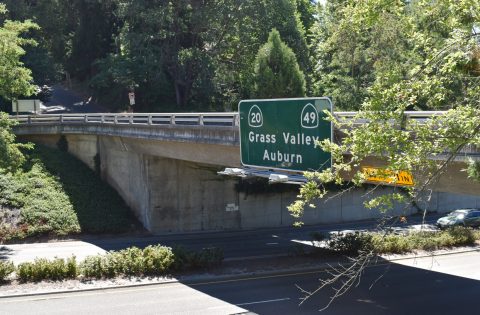 SR 49 received its designation in honor of the 49ers. The state route is frequently referred to as the Gold Country Highway, Mother Lode Highway, Golden Chain Highway, and other names that speak to its heritage as the main highway to communities, towns, and cities founded during the Gold Rush of 1849.

Located just east of Auburn right off of Interstate 80, the Foresthill Bridge was built in 1973 for a proposed realignment of California State Route 49. The new straighter route was intended to avoid low-lying areas at the base of the canyon along the North Fork of the American River. Had the Auburn Dam been constructed, the alignment would have crossed a 135 foot deep reservoir at capacity. The Foresthill Bridge was constructed as planned, but the approaches were not. The span was eventually withdrawn from the state highway system and it is currently maintained by Placer County.1

The Foresthill Bridge is California's tallest bridge at 730 feet in height. Only the Royal Gorge bridge in Colorado, at 1,053 feet, and the New River Gorge Bridge in West Virginia, at 876 feet, is higher than the Foresthill bridge. Painted green, with large concrete supports, the bridge spans high above the North Fork of the American River. Walkways built on either side of the bridge provide stunning, unobstructed views of the valley below. Photos taken 01/19/03.

A 1920s-era concrete arch bridge formerly carried SR 49 over the Yuba River. Adjacent to its replacement, this span was crafted in a manner similar to the U.S. 80 arch bridges in San Diego County. The bridge is closed to vehicles, and it is primarily a pedestrian bridge for hikers to the Yuba River. Photos taken 01/19/03.