Finally getting around to reviewing a day trip we took on May 9 from Pensacola, Florida west to Biloxi, Gulfport, New Orleans and LaPlace, Louisiana. While we have extensively covered much of this region previously, several key projects are underway or were completed in recent years. Let’s take a look at a few of them.

The drive across Mobile was uneventful and the only work ongoing is a resurfacing project along Interstate 10 in Mobile. The same could be said for Jackson County, Mississippi, as the drive along I-10 was unnoteworthy.

Once in D’Iberville additional upgrades are taking place. This work follows prior work to build an interchange between I-110 at Sangani Boulevard / Promenade Parkway and completion of the Mississippi 67 expressway. Construction continues involving both the full-cloverleaf interchange between Interstates 10 and 110 with Mississippi 67 and the adjacent side roads. This work does not yet include the proposed flyover linking I-10 west with I-110 south.

Phase I of the current construction involves building a new collector distributor roadway for the eastbound I-10 mainline at I-110 to offset weaving traffic movements. Just to the west a new partial diverging diamond interchange (DDI) for Galleria Parkway (former D’Iberville Boulevard) was added and opened to traffic in June.1

Shifting to the east, the Lamey Bridge Road overpass was replaced and a new westbound off-ramp from I-10 to it opened by the end of July. Remaining work pertaining to Phase I wraps up by October.2 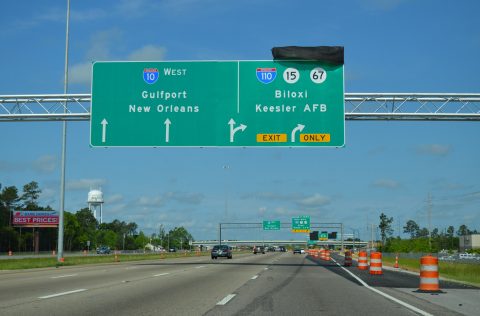 Arrow-Per-Lane (APL) signs are among those newly installed along Interstate 10 westbound ahead of both the new Lamey Bridge Road off-ramp and extended c/d roadway for I-110 south and MS 67 north. 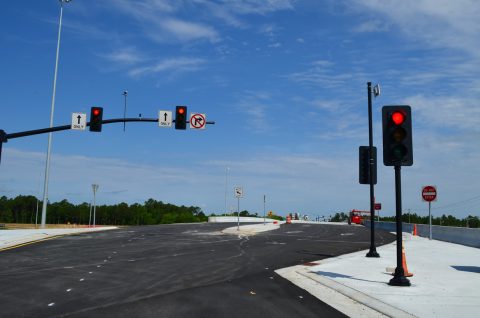 Facing north on Galleria Parkway at the DDI with Interstate 10.

Phase II work involves the completion of the Big Ridge Road half diamond interchange with Interstate 110 just to the south of I-10. With construction running concurrently with Phase I, the new ramps should be open by October.2 Both aspects of this project enhances local area access to D’Iberville and the sprawling Gulf Promenade retail area to the north of Interstate 10. 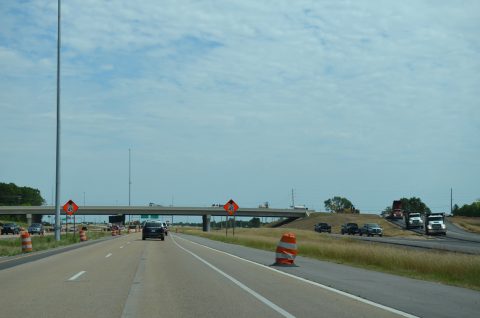 A new distributor roadway will take motorists from I-110 north to both Big Ridge Road and Interstate 10 east.

We have now reached the ten year anniversary of Hurricane Katrina’s devastating landfall on the upper Gulf Coast. The massive storm surge from the cyclone toppled key bridges across both the Mississippi Gulf Coast and Southeastern Louisiana. Some of those we covered previously in 2007. Among those was the U.S. 90 bridge linking Biloxi with Ocean Springs. The low level four-lane bascule bridge that previously crossing Biloxi Bay was mostly destroyed by a 22 foot storm surge. This severed an important connection and as such and a fast track solution was sought.3 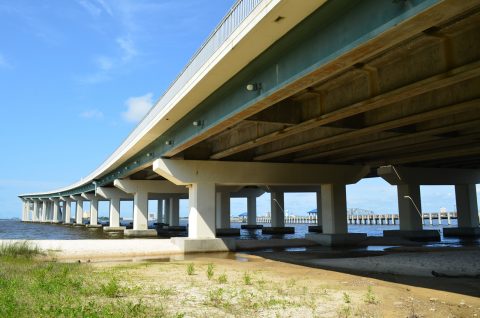 A $339-million project was underway in 2006 to remove the former bridge and associated debris and build a new higher level bridge.3 Completed two years later, the replacement includes a hump over the navigation channel providing a 95 foot vertical clearance to vessels below, six overall lanes and a 12 foot shared use path. 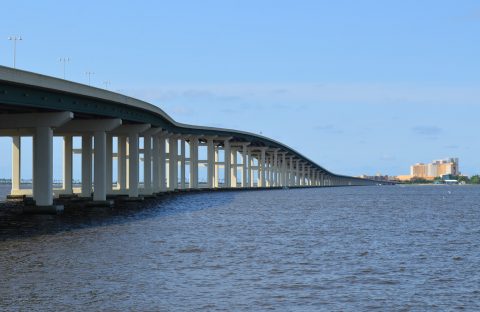 Looking at the Biloxi Bay Bridge from an adjacent fishing pier on the north side of the span by Plummer Point.

The Biloxi Bay Bridge initially opened with two lanes of traffic on November 1, 2007. Opening of the remainder of the bridge occurred on March 28, 2008.

Continuing west into New Orleans, we redrove of the area Interstates, taking note of new signs and state-named shields added in recent months. Both directions of Interstate 610 were resigned and now all signs feature Clearview font (with the exception of the westbound City Park sign). 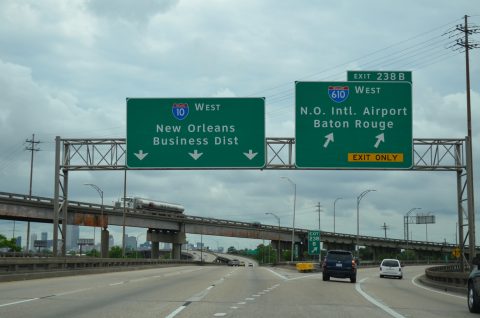 A new set of signs was installed at the westbound split of Interstates 10 and 610.
The previous set remain from the late 80s or early 90s, even with a missing I-10 shield. 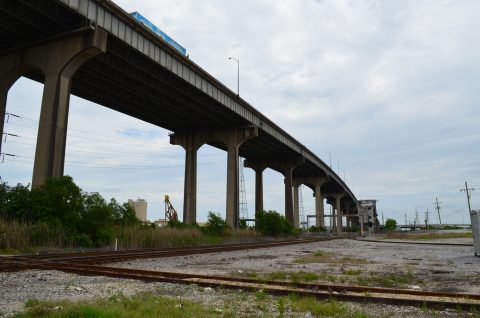 Interstate 10 ascends across the Inner Harbor Navigation Canal (locally referred to as just the Industrial Canal) on the High Rise bridge. Paralleling below is railroad swing bridge alongside an abandoned section of Almonaster Avenue. 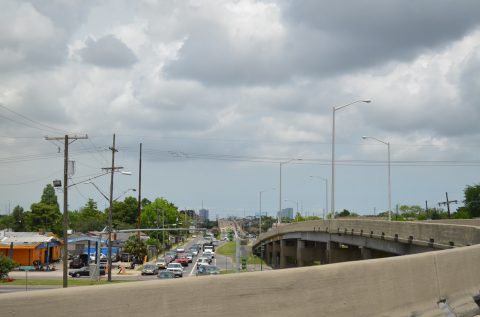 Looking north from the overpass linking U.S. 90 (Jefferson Highway) east with LA 3046 (Causeway Boulevard) north. This is the only free flowing movement at the south end of Causeway Boulevard.

Our goal in Southeastern Louisiana this day was to check out and drive across the recently widened Huey P. Long Bridge. The cantilevered bridge was expanded dramatically as part of a four phase $1.2-billion project between April 2006 and June 2013. Work expanded the roadway portion of the bridge (a railroad line also runs across the span) from 18 feet to 43 feet with three eleven foot travel lanes and full shoulders per direction. A dedication ceremony was held on June 16, 2013. 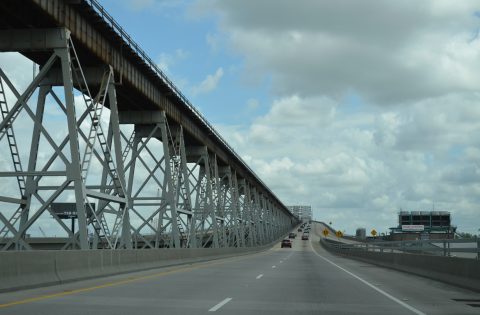 Two lanes continue south from Clearview Parkway (LA 3152) onto the Huey P. Long Bridge. A new overpass was built to shuttle motorists over U.S. 90.
U.S. 90 joins the bridge via a two-lane on-ramp from Jefferson Highway below. 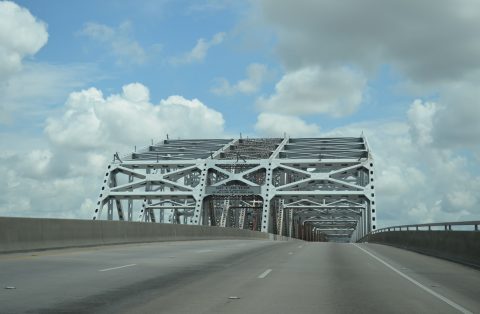 The superstructure of the Huey P. Long Bridge extends over the travel lanes of U.S. 90. Compare this view to that of the original bridge deck. 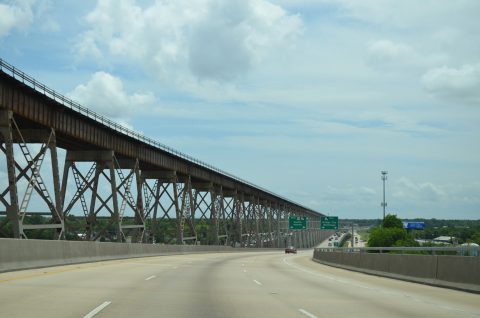 Viaducts were extended southward from the Huey P. Long Bridge to carry U.S. 90 motorists across LA 18 and Bridge City Avenue, resulting in a new diamond interchange. 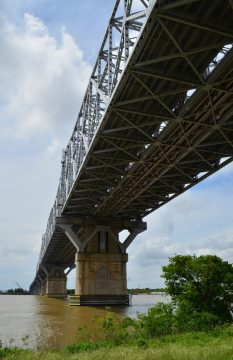 Looking at the underside of the Huey P. Long Bridge from the south banks of the Mississippi River at Bridge City.

After checking out the Huey P. Long Bridge, we decided to redrive Louisiana 3139, the underutilized Earhart Expressway paralleling U.S. 61 (Airline Highway) east from near Harahan to the New Orleans city line at Holly Grove. Curiously the east-west freeway is signed with north-south cardinal direction banners on LA 3139 signage. 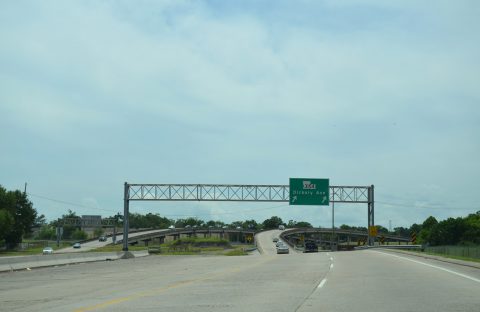 The Earhart Expressway sees a stub end ahead of Louisiana 3154 for an unrealized western extension. Several other stubs exist further east for unconstructed ramps. 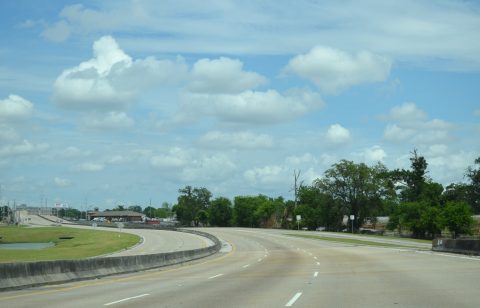 It had been since 2008 since we last documented all of Interstate 310. Also given reports from Jeff Royston that new Clearview based signs were installed throughout the route, we opted to redrive it as well. 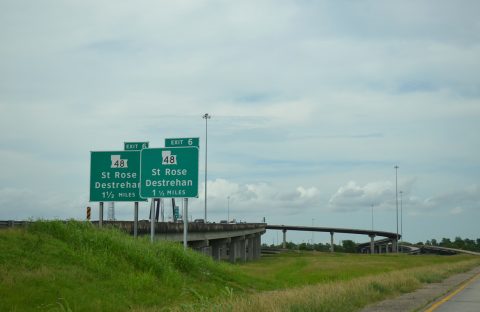 Several of the new Clearview assemblies posted at the south end stand behind their predecessors. 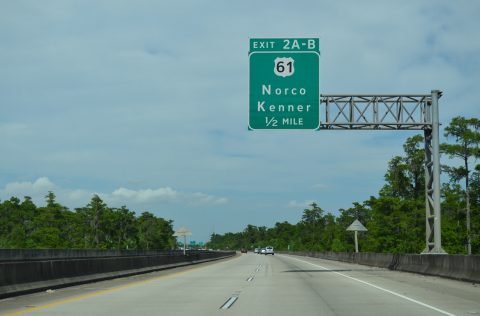 A number of poorly designed signs are now in use along Interstate 310. Among these is the series preceding the stack interchange with U.S. 61 (Airline Highway) on northbound.

Made a stop at Luling to a riverside park adjacent to the Mississippi River levee to take a look at the Hale Boggs Bridge from underneath. Otherwise the remainder of the drive took us west to LaPlace, north to Hammond and back east along busy Interstate 12. Some of these photos will be added to the main AARoads guides in the coming months. 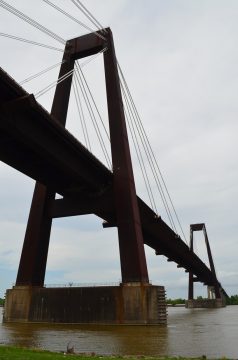 The Hale Boggs Bridge spans the Mississippi River between Luling and Destrehan upriver from New Orleans. The cable-stayed bridge opened to traffic in 1983, but only locally between LA 18 and LA 48 until 1988.