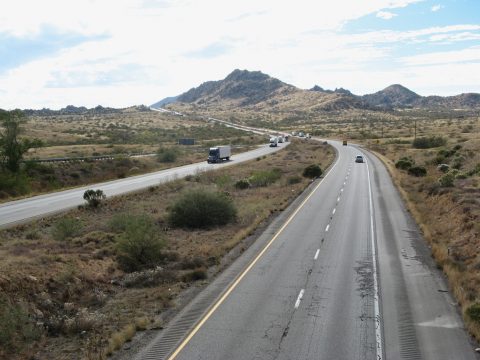 Looking east at Interstate 10 from the Johnson Road overpass at Exit 322 in Cochise County, Arizona. 11/10/07

The history of Interstate 10 through Arizona is a long one, one marked by tensions, realignments, and delays. While portions of the freeway were completed fairly early, the final section was not completed until 1990 - the last section of Interstate 10 completed in the United States.

I-10 is the primary Interstate from west to east in Arizona. Crossing the Colorado River in Ehrenberg, the freeway meets SR 95 and U.S. 95 in Quartzsite. U.S. 60 branches east from I-10 beyond the Plomosa Mountains near Brenda. Bee lining across Ranegras Plain and Harquahala Plain to Tonopah, I-10 converges with te north end of SR 85 at the city of Buckeye.

Passing just south of the White Tank Mountains through Buckeye Valley, Interstate 10 heads east through Goodyear into Phoenix, meeting I-17 at the Stack interchange. I-10 continues through Downtown Phoenix under Margaret T. Hance Park, which was constructed over the freeway. Forming a loop encircling the Phoenix central business district with I-17/U.S. 60, I-10 turns south at the Mini-stack interchange with SR 51 and Loop 202, then east from the end I-17. Shifting south through Broadway curve, I-10 continues alongside U.S. 60 to Tempe. South through Guadalupe and Chandler, I-10 leaves the Phoenix area beyond Loop 202.

Traveling southeast across the Sacaton Mountains and through Gila River Indian Reservation, Interstate 10 continues to Casa Grande, the east end of I-8 and Eloy. South of Eloy, I-10 passes Picacho Peak and the small town of Picacho, advancing through Marana before entering Tucson. I-10 passes to the west of Downtown Tucson to Interstate 19, where it angles across the south side of the city adjacent to Benson Highway (old U.S. 80).

East of Tucson, traffic decreases as Interstate 10 passes between the Rincon and Whetstone Mountains to Benson. Curving northeast, I-10 climbs Texas Canyon, passing Dragoon and The THING?, a noted roadside stop. U.S. 191 accompanies I-10 north of Willcox Playa into Willcox and the Sulphur Springs Valley. The two part ways north of the Dos Cabezas Mountains, with I-10 proceeding east into the San Simon Valley to Bowie, San Simon and the New Mexico state line.

Interstate 10 replaced U.S. 60 from Ehrenberg to Brenda, SR 93 from I-17 to Casa Grande, SR 84 from Picacho to Tucson, SR 84A in Tucson, U.S. 80 from Tucson to Benson and SR 86 from Benson to the New Mexico state line. Indirectly replacing U.S. 60, the route from Brenda to I-17 was a new alignment. The alignment for I-10 from Casa Grande to Picacho parallels SR 84.

East of Tucson, the route for I-10 was finalized in 1956. There were some debates on the alignment between Phoenix and Tucson, but these were cleared up by 1961. Between Quartzsite and Phoenix, the alignment was under debate until 1962, with Wickenburg pressing for a more northerly course along U.S. 60. There was talk about building the "Brenda cutoff" (present alignment) as a toll road to accelerate construction (estimated completion was 1975), but that idea was ended by the Arizona Legislature in 1961.

Original plans in Phoenix showed an alignment along Buckeye Road into Phoenix, however this was realigned to the present-day route in 1964 to serve local traffic better. Ironically, with the growth in the West Valley, later plans developed for a reliever to this freeway - on an approximate alignment following Buckeye Road.

Interstate 10 along the Papago Freeway was extremely controversial through Phoenix. The freeway was first planned through the city in 1957, then revised in the 1960 freeway plan. A 1970 freeway plan showed Interstate 10 arching up to 100 feet above Central Avenue, with spiraling "Helicoil" ramps to connect the freeway to 5th-7th Avenues, and 5th-7th Streets. 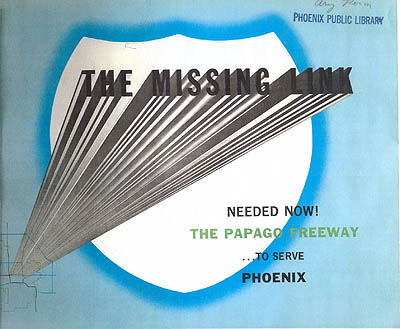 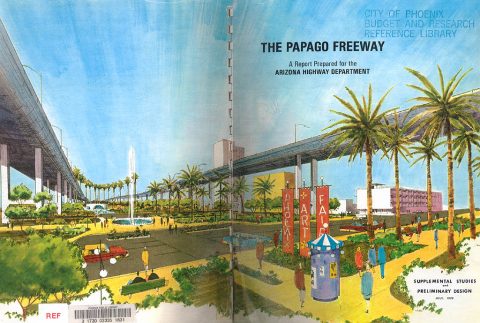 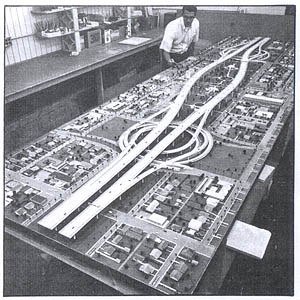 Model of the freeway over Central Avenue. 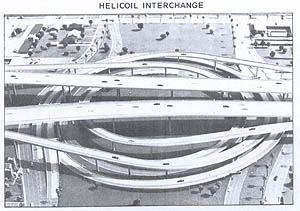 Model of the Helicoil Interchange.

Nina Pulliam, wife of Eugene Pulliam (publisher of the Arizona Republic) saw these plans one night and remarked how she didn't like them. This was enough to change the editorial position of the influential paper. Combined with anti-freeway sentiments in the early 1970s, this led to the Papago Freeway's design rejection in a public vote. A revised design would not be created until 1983, which had the freeway traveling below grade and a ten block park, the Margaret T. Hance Deck Park, preserving continuity between 3rd Street and 3rd Avenue. 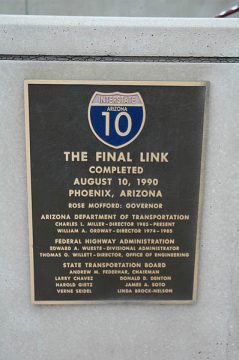 Located atop Hance Park near the Phoenix Public Library, this plaque was unveiled at the completion of I-10 in August 1990. Photo by Terry Nash in September 2005.

Other expansion plans called for reconstructing Interstate 10 from the Mini-Stack with Loop 202/SR 51 to Ray Road through Phoenix into a dual freeway configuration with up to 20 overall lanes.