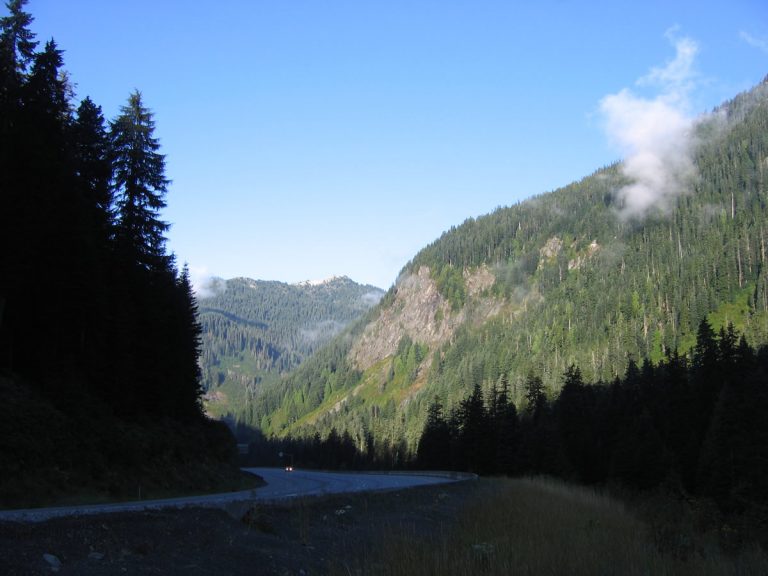 Interstate 90 east climbs onto Snoqualmie Summit in this scene near Franklin Falls. I-90 west straddles the hillside (out of view) of Denny and Granite Mountains. Photo taken August 31, 2006.

The Lacey V. Murrow Floating Bridge was the last major piece of Interstate 90 opened to traffic in Washington. The bridge was built as part of a $1.56-billion project for I-90 that included a tunnel, retaining walls, landscaped lids (tunnels) and bike/pedestrian trails that ran through 1996. The span across Lake Washington stretches 6,500 feet. The south bridge opened on September 12, 1993 with three overall eastbound lanes to compliment the 1989-completed north bridge (Homer M. Hadley Memorial Bridge) that does double duty with four westbound lanes and two eastbound carpool/bus lanes. The 1993 bridge consists of 25, 350-foot long floating concrete pontoons that replaced a 1940 bridge. The 1940 bridge was replaced because it partially sunk during stormy weather in November 1990 during a $35.6 million renovation project.2

$551 million in funding for the Snoqualmie Pass East Project to upgrade 16 miles of Interstate 90 between Hyak and Eaton was secured in 2005. The work expands the freeway by an additional lane in each direction, replaces aging concrete, adds or replaces existing bridges and culverts, and reduces winter avalanche closures by constructing new bridges to supplant the existing snowshed along I-90 west by Keechelus Lake. Interstate 90 along this stretch overtook U.S. 10, which was four-laned during the 1950s and 1960s.

Broken into three stages, Phase 1 effects I-90 between Hyak and Keechelus Dam, covering the stretch along Keechelus Lake. This work includes straighening sharp curves and stabilizing rock cuts in addition to the aforementioned project elements. Construction commenced in Spring 2009 and extended through Fall 2017.

$108 million in cost savings made with the first phase allows WSDOT to focus on the next two miles (Phase 2A) from Keechelus Dam to Stampede Pass. Work here includes the construction of a new wildlife overpass at the Price Creek Snopark. Phase 2B continues work another 2.5 miles eastward to the Cabin Creek Interchange. The 2013 schedule outlined construction between Spring 2015 and Fall 2020.

Phase 3, between Milepost 64.4 and Easton, will include additional wildlife crossings, extending truck climbing lanes and replacing low-clearance bridges. As of 2013, only planning is funded on this phase. An elongated trumpet interchange joins U.S. 97 with Interstate 90 to the west of Ellensburg. The two routes combine southeast to I-82. Photo taken August 31, 2006. 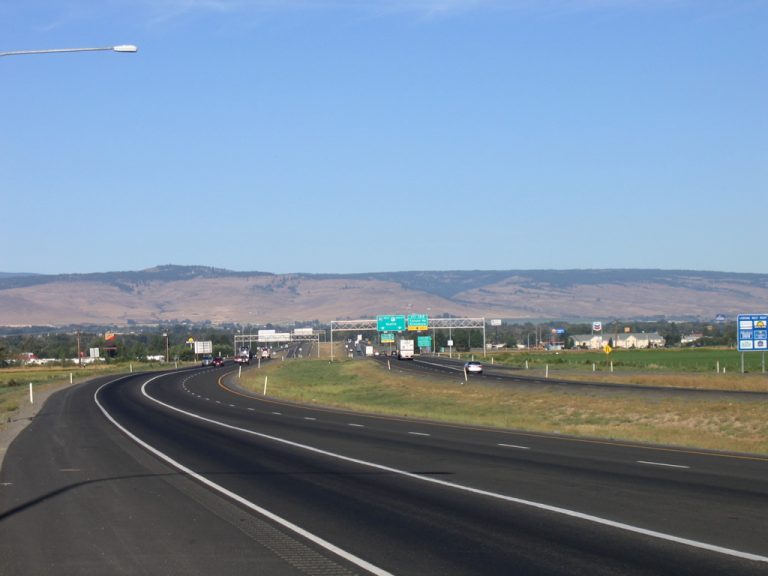 The Cascade Range foothills appear to the west of Interstate 90 in this scene taken from the west end of I-82 at Ellensburg. Photo taken August 31, 2006.

The best signed business loop for Interstate 90 in Washington is the six mile loop along old U.S. 10 through Moses Lake. The route follows Broadway northeast from Exit 176 along Washington 171 to downtown and Pioneer Way southward, part of which doubles as Washington 17, to Exit 179. Signage varies between the standard green and white shields and tri-color Interstate shields.