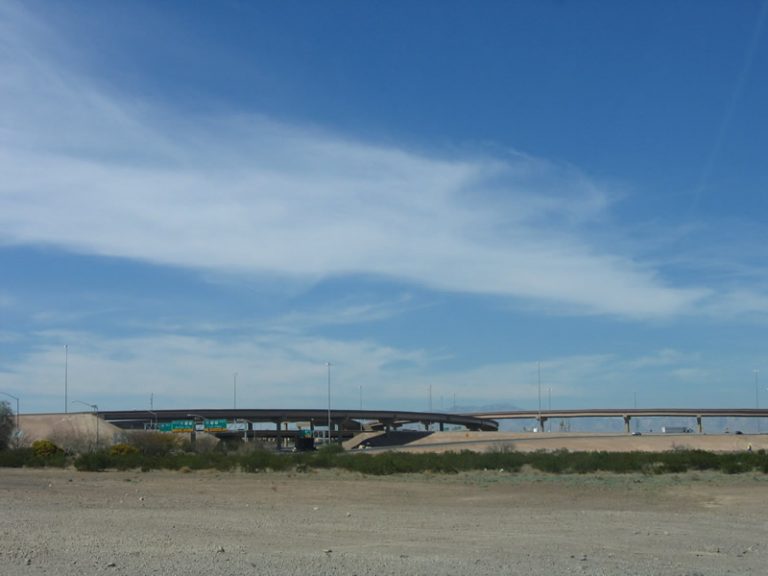 Southwesterly view of I-215/515 interchange from an adjacent industrial site by Henderson. Photo taken 04/02/06.

Interstate 215 and Clark County 215 together form the Las Vegas/Bruce Woodbury Beltway. The Bruce Woodbury Beltway begins at the Henderson Bowl Interchange with I-11 south, I-515 north and SR 564 in the southeast, then flows in a clockwise direction west to I-15 and Durango Drive. Continuing northwest, the beltway heads to Summerlin where it meets Summerlin Parkway (SR 613) and then U.S. 95 at the Centennial Bowl Interchange. The remainder of CC-215 travels east back to Interstate 15, northeast of Las Vegas.

The Interstate 215 portion of the Bruce Woodbury Beltway is currently only the southeast quadrant, between I-515 in Henderson and I-15 in the unincorporated community of Paradise near McCarran International Airport (LAS). It was completed in 2005 with the opening of the interchange at I-515/SR 564. The rest of the beltway is Clark County 215 because it was not constructed with state funds and or built to Interstate standards.

As the Clark County 215 (CC-215) beltway is brought to Interstate standards, it may eventually be included in a future extension of I-215. This upgrade was previously scheduled for completion in 2013, but the beltway remains at grade through the Centennial Bowl Interchange.

Work through Fall 2018 upgraded the beltway to limited access standards from Craig Road to Hualapai Way. This project ran from September 2015 to 2019. Another $70 million project started late July 2018 converts CC-215 to a full freeway from east of 5th Street (Exit 46) to the Union Pacific Railroad crossing. Work on this segment of the beltway will wrap up in Summer 2020.2

The U.S. 95 Northwest Corridor Improvements Project upgrades and expands U.S. 95, with work started at CC-215 constructing a systems interchange. Named the Centennial Bowl, the second busiest interchange in Southern Nevada, is partially complete. Phase 3A work from August 2015 through Summer 2017 added a new flyover from CC-215 west to U.S. 95 south, and an at-grade ramp from U.S. 95 north to CC-215 east (completed in 2016). The $47 million, half mile bridge shuttling motorists from CC-215 west to U.S. 95 south debuted to traffic on July 12, 2017.1

What driving new #CentennialBowl ramp from WB 215 Beltway to SB US95 looks like! It opens @ 2pm (pay no heed to truck going wrong way?) pic.twitter.com/Dpc66Cwofb

Beginning in early 2021, Phase 3D completes the systems interchange and upgrade CC-215 through the exchange into a six-lane freeway. Work on the Centennial Bowl interchange is scheduled to end in 2024.3

Construction of the Bruce Woodbury Beltway between St. Rose Parkway and Interstate 515 directly overlaid Lake Mead Parkway (SR 146). I-215 and SR 146 were cosigned until 2003, when the overlap was eliminated and the former alignment of SR 146 east of I-515 was recommissioned as SR 564.

With completion of the Fish Bowl interchange joining I-15/215 with CC-215 west, signs until early 2002 displayed "Decatur Boulevard to Beltway West." Replacement signs included Clark County 215 shields. The loop ramp from I-215 west to Interstate 15 south was among the last of the ramps to open.

Exit numbers along the I-215 portion of the beltway, which increase from east to west, were renumbered:

The exit to SR 564 (Lake Mead Parkway) at the southeast end of Interstate 215 is unnumbered.

NDOT prepared conceptual plans with several proposed alignments of an eastern beltway for public input. Public response resulted in many preferring super arterials be built instead of an eastern beltway segment. High costs for right of way acquisition through dense residential and commercial areas also put the beltway concept out of reach financially.

A previous plan called for an eastern extension of the beltway by extending the freeway past Interstate 515 into Henderson. One of the three possible alignments outlined for the Interstate 11 corridor involves the eastern beltway corridor.