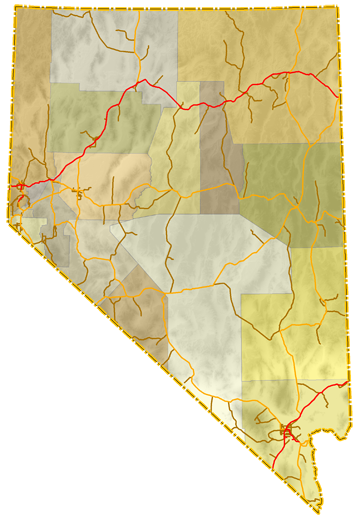 Route Log based on information from the January 2008 edition of Nevada's State Maintained Highways Descriptions, Index, and Maps.

The original Nevada State Route system was renumbered in 1976 to its current system. This system clusters primary, secondary (urban), and secondary (rural) routes by county. The following chart shows the numbers assigned to each county, including any routes added and/or removed from the state route system since 1976:

In addition to the Nevada Interstate Highways, Nevada has several other arterials that are designated as part of the National Highway System. This includes as of 2016:

Nevada uses the white, California-style milepost in place of the green on white signs found throughout the rest of the country. These markers indicate the county name, the route number, and the type of route. The markers are used on interstate highways in Nevada in addition to the typical Interstate green-and-white mileposts. The numbers for the white markers are reset at each county line. Although California refers to these as “postmile markers,” Nevada refers to their version as “mileposts.”

Each Nevada milepost has an abbreviation indicating the class of the route: “IR” for Interstate, “US” for U.S. routes, and “SR” for all state routes. Occasionally these markers are the only indication that a road is maintained by the Nevada Department of Transportation (NDOT).

Nevada uses two-letter abbreviations while California uses three letters. The following is a list of all two-digit county codes for Nevada Mileposts. These abbreviations are also used in the State Route Lists.:

The Nevada Highways pages are in no way related to the state of Nevada or the Nevada Department of Transportation (NDOT).