Happy New Year! Like many other road enthusiasts, we wrapped up a somewhat low key year as far as travel in 2020. This included one major trip and several day trips in state. Personally I finished up the year with one final trip to the Mid-Atlantic over part of the holidays, although my travels once at my destination were somewhat limited.

The bulk of the drive north and back south was over the usual, Interstate 95, etc. Did take a daytrip on December 22 to Reading, Pennsylvania both to reshoot Interstate 176, but also the area expressway network including the Warren Street Bypass (PA 12), U.S. 222 and U.S. 422. Returning south, made a short loop in Richmond to replace photos from 2004 to 2010, and also drove all of Interstate 295 at Fayetteville, which was extended south to U.S. 401 in September. Will hopefully work some of this coverage into subsequent page updates. 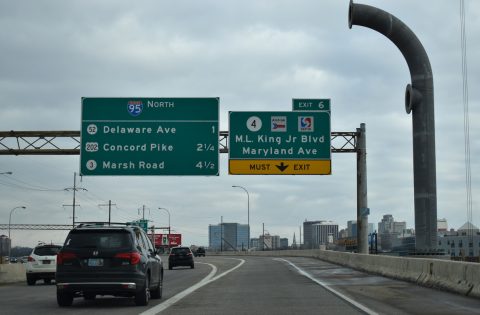 A new monotube sign assembly will replace the sign bridge along the Wilmington Viaduct for I-95 northbound at Exit 6 for SR 4 (Maryland Avenue). 12/22/20

During some of my downtime, I began posting photos from southeastern Pennsylvania while also converting 15 year plus old pages.

Within Delaware, updated several of the guides for Delaware State Routes. Also finally drove the U.S. 301 toll road between Middletown and St. Georges, Delaware. The all electronic toll road opened in January 2019 and was formally named the First Responders Memorial Highway. Thus far, have posted December 2020 photos to the following pages: