Delaware State Route 4 parallels Interstate 95 to the north between Newark and Wilmington. The state route varies as a suburban or urban arterial, connecting the communities of Brookside, Ogletown and Stanton and the town of Newport. Mostly serving local traffic and commuters, SR 4 also forms part of a truck bypass for Newark and a through route alongside SR 7 at Churchmans Crossing and Stanton.

The first version of SR 4 dates as far back as at least 1938. That route traveled east from the Maryland state line to Middletown and Odessa along what is now SR 299 until 1957. The designated was reassigned to the route between Newark and Wilmington in 1967.

An extension through Wilmington was made as part of the 1970 citywide renumbering of U.S. 13, U.S. 202, SR 9 and SR 48. SR 4 overtook the former alignment of U.S. 202 south along Washington Street to Baynard Boulevard, where it branched northeast through the 9th Ward Area, Harlan and Brandywine Hills to exit the city. The route concluded along Washington Street Extension at U.S. 13 Business (Philadelphia Pike). By 1981, SR 4 was truncated back to SR 48 (2nd and Front Streets). 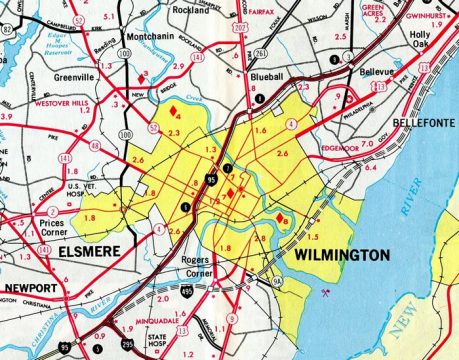 Historically, SR 4 began at the Maryland state line via Chestnut Hill Road to the southwest of Newark. Chestnut Hill Road carried the state route east across south Newark to Brookside and SR 273 at Ogletown. The western portion of Chestnut Hill Road was decommissioned as SR 4, and renamed Old Chestnut Hill Road, when the "SR 4 Connector" opened west from S College Avenue (SR 896) to Elkton Road (SR 279 / former SR 2) in September 1983. The controlled access roadway was named Christina Parkway three weeks after it opened.

Realignments of SR 896 in 1985 and SR 2 in 1988 added both routes to Christina Parkway east from Elkton Road. Relocated to bypass the University of Delaware campus south from Downtown Newark, SR 896 combines with SR 4 east to S College Avenue. SR 2 was moved onto SR 4 east to SR 72 north to divert through traffic around the city. SR 2 was ultimately dropped from SR 4 in Fall 2013 when it was truncated eastward to SR 72 (Library Avenue) at SR 273 (E Main Street).

Leading away from Newark, Chestnut Hill Road carries SR 4 eastward by a number of older subdivisions at Brookside to the community of Ogletown. Ogletown was once the site of heavy congestion from when SR 273 shared a brief overlap with SR 4 between Ogletown Road west back into Newark and Christiana Road southeast to Christiana. The concurrency was eliminated in 1997, when a new controlled access expressway opened for SR 273 above SR 4.

Advancing east from Ogletown, SR 4 (Stanton Ogletown Road) remains a busy arterial to Harmony Road, Christiana Hospital, the south entrance to Delaware Park and SR 7 at Churchmans Crossing. The state route combines with SR 7 north to the community of Stanton. 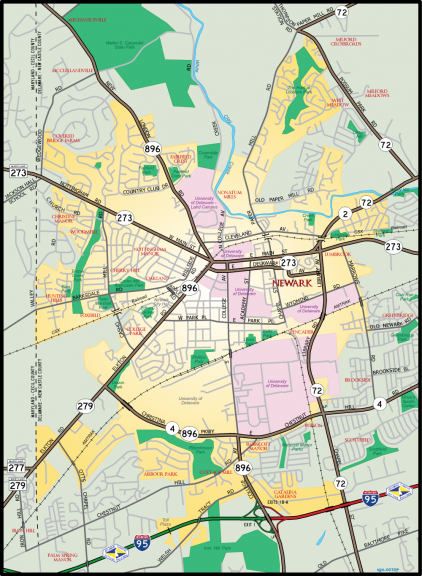 The 1.2 mile long overlap for SR 4/7 comprises a six lane controlled access arterial to the east of Delaware Park, and over the AMTRAK Northeast Corridor and White Clay Creek. The alignment was constructed in the early 1980s to bypass a narrow and often flood plagued railroad underpass and a concrete arch bridge. An access road links the north end of the old alignment with SR 4/7, while the south end ties into the state routes directly.

Once in the town of Newport, SR 4 splits again into a one way pair, with eastbound using Market Street and westbound taking Justis Street. The couplet passes below a freeway viaduct carrying SR 141 north to Prices Corner and south to New Castle. SR 4 recombines two blocks east of Marshall Street and the northbound ramps for SR 141.

Maryland Avenue passes between the Cleland Heights and Latimer Estates subdivision to enter the city of Wilmington at the split with Broom Street. Broom Street heads north to Bayard Square while SR 4 continues to the Browntown and Hedgeville neighborhoods. SR 4 varies with capacity on the descent toward West Center City depending on time of day. During peak hour traffic four lanes are available. The outside lanes accommodate on street parking during the rest of the day and on weekends. Resurfacing of SR 4 underway between Fall 2018 and Fall 2019 includes a road diet along Maryland Avenue from Race Street at Richardson Park to Beech Street in Wilmington. The Maryland Ave, Lane Reconfiguration, North DuPont St to Beech St project adds bike lanes, on-street parking and a continuous turning lane in the median. 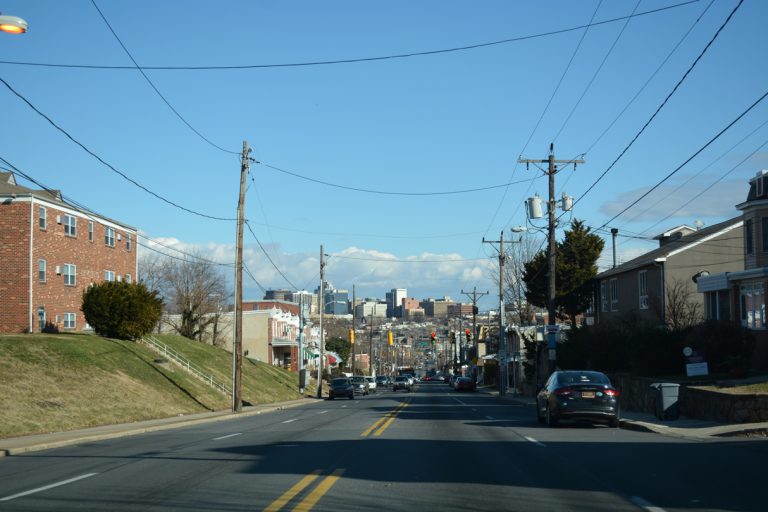 High rises from the central business district rise along the eastern horizon as SR 4 (Maryland Avenue) lowers from the city line toward the Christina Riverfront and Interstate 95. 12/30/16