821,618 vehicles were registered in the state of Delaware as of May 1, 2005.3 Delaware’s License plates are neither embossed or debossed. They are created with a silk-screening process and are flat. License plates in Delaware feature up to seven characters. Prefixes indicate the type of vehicle or organization they represent.

The font was revamped from Arial to Arial Bold, but still failed to recreate the original font. Waldale redesigned the font again in 2006 and it now more closely resembles the original. 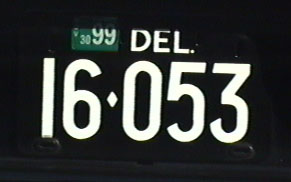 Low numbered tag numbers are prestigious in Delaware for some residents. The lower the number, the better, according to those who find this to be the case. The state of Delaware began issuing license plates to vehicles in 1905. Initially owners were required to make their own plates, and not until 1909 did the state issue its own first official license plate. Car owners until that time generally assigned one to three numbers on their license plate. The state began assigning numbers in 1909, starting with 1,000. This numbering was chosen because of the sporadic issuing of numbers under 1,000 and of poor record keeping of them until that time.2

The Delaware General Assembly reserved tag numbers 1, 2, and 3 were for the Governor, Lieutenant Governor, and the Secretary of State respectively in 1935. License plate numbers from four upwards remained in the general circulation.2

Nowadays many car owners and their families covet lower numbered tags in the state of Delaware. Tags are transferable from vehicle to vehicle, may be sold from Delawarean to Delawarean, or reassigned to other family members. The Division of Motor Vehicles only levies a $20 fee for the transfer of a tag number from one owner to another. Tag numbers that are not maintained run the risk of ceding back to the State and returned to general circulation.

The rage of low license plate numbers fetches some outrageous tag number sales in the state of Delaware. In 1994 the sale of Delaware tag #9 garnered $182,500 and in 2005 Delaware tag #170 sold for $115,000.2 Some four-digit plates can bring over $10,000 to the prospective seller. Other states where low numbered tags draw such attention include Washington, Massachusetts, Rhode Island, Illinois, and the District of Columbia.

To add to the fever behind low numbered tags in the state of Delaware, owners of low number plates may opt to purchase a replica of 1942-era license plates to display on their vehicle in place of the standard gold on blue tag. Through the Delaware Historic Plate Company, porcelain license plates may be purchased and displayed on passenger vehicles with tag numbers lower than 87,000, and commercial vehicles with tag numbers lower then C9999. The yearly fee for these tags is $60.

Low license plate numbers may be available from the DMV in addition to those being sold by current tag owners. Delaware DMV occasionally has eligible tag numbers available when numbers cede back to the state by owners who either left the state, sold their car to an out of stater, or otherwise let their plates expire. Those interested must inquire with the DMV about availability.