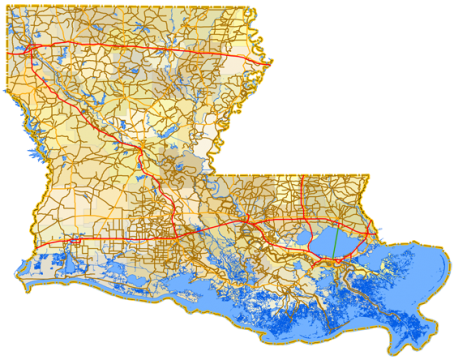 The following tables list the mileage and endpoints for every Interstate, U.S., and State highway within the Pelican State. Mileage statistics were obtained and transcribed from the “Geographic Feature File for all of the State Maintained Highways in Louisiana”.

Suffixes for U.S. Highways in Louisiana reference bannered routes. These are used internally by LADOTD and not posted on signs in the field.

There are various hyphenated highways numbered within the Louisiana state highway system. Generally very short in length, these routes are signed with the format of LA XXXX-X. In an email correspondence, Ronnie Goynes provides some background information on these:

The hyphenated route numbers, as best I can determine, were given to State Routes that were close together in a city or town and their route description has in it “routes in …(city)”. We have eliminated many of these over the years by exchanging with the city. These route numbers have been in place for many years, but I cannot remember any new routes being given the hyphenated number.”

Special thanks goes to Ronnie Goynes and Richard Savoie, both of LADOTD, for their help in obtaining the Geographic Feature File for all of the State Maintained Highways in Louisiana and answering questions regarding the state highway system.