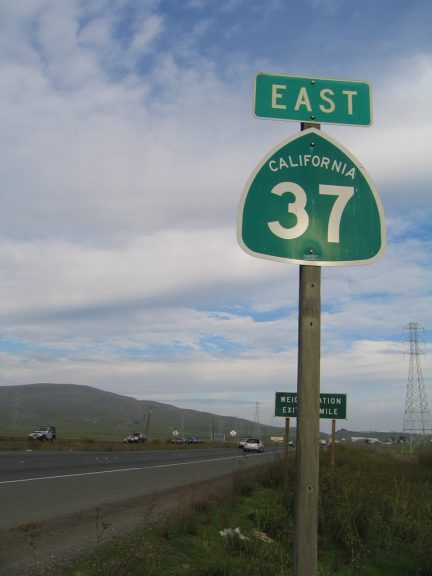 California 37 is a major route connecting the cities of the North Bay. Starting at U.S. 101 in Novato, California 37 carries two to four lanes across the marshy flats that define the northern shore of the San Francisco (San Pablo) Bay. The highway intersects California 121 at Sears Point, then swings southeast into Vallejo. Passing to the north of that city, California 37 again changes into a expressway/freeway combination as it connects with California 29 and Interstate 80.

With a spate of accidents and injuries in the 1990s, California 37 carried the inglorious moniker "Blood Alley," resulting in a higher priority for local politicians to find funding to make California 37 into an expressway and ultimately as a freeway. Currently, sections of California 37 slated for such an expansion, especially in Vallejo, where a new interchange is planned with California 29. The stretch along the marshy north shore is also slated for expansion, but such work requires extensive environmental review due to the preponderance of wetlands in the vicinity.

Traffic reporters sometimes refer to the nine bridges of the San Francisco Bay Area. Some of the bridges are easily identifiable, including the Golden Gate Bridge (U.S. 101) and San Francisco-Oakland Bay Bridge (I-80). A few are on a second tier of trans-bay bridges that are less well-known than those two, including SR 84 (Dumbarton Bridge), SR 92 (San Mateo Bridge) and I-580 (Richmond-San Rafael Bridge). Then there are the three Delta bridges: I-80 (Carquinez/Alfred Zampa Bridges), I-680 (Benicia-Martinez Bridge), and SR 160 (Antioch Bridge). That accounts for eight of the nine bridges, and they all carry a common thread of being toll bridges. But when reporters mention that ninth bridge, they are referring to the SR 37 / Mare Island Bridge.