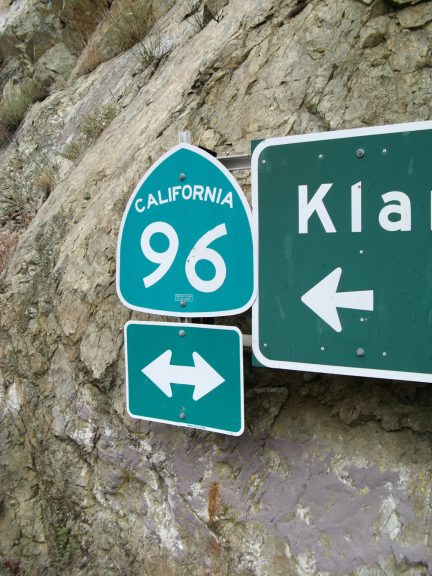 Closely following its namesake river through the Siskiyou Mountains, California 96 is the Klamath River Highway. The state route meanders from California 299 in Willow Creek in the south to a point north of Yreka, joining with Interstate 5 following a curving arc. Photo taken 05/25/08.

California 96 follows the Trinity and Klamath Rivers on its course from Willow Creek (California 299) north to Interstate 5 near Hornbrook. Staying within these rivers' valleys, the highway serves recreational areas within the Klamath National Forest as well as the Hoopa Valley Indian Reservation, Weitchpec, Orleans, Clear Creek, Seiad Valley and Hamburg. A portion of the route is designated as the State of Jefferson Scenic Highway.

The Randolph Collier Rest Area lies between Interstate 5 and the Klamath River at the east end of California 96. The facility serves travelers along both routes, and is the first for southbound motorists entering California from Oregon. Randolph Collier was a state senator and chairman of the California Senate Transportation Committee, who was instrumental in crafting the Collier–Burns Highway Act of 1947. This act established a role for the state in constructing urban freeways, increased gasoline and vehicle registration fees that were allocated to a highway revenue fund, and set a 55:45 ratio of state highway construction funds split between the southern half and northern half of the state respectively. Counties also received a guaranteed minimum amount of funding for road systems as part of the act.1 As a result of this historic act, which ushered in a new era of rural highway and urban freeway construction, Mr. Collier became known as the "Father of the California Freeways." Both this rest area and the Collier Tunnel on U.S. 199 are named in his honor.