The Del Mar and Solana Beach business loop for Interstate 5 was established in the 1960s along Via de la Valle west from I-5 at Exit 36 to Coast Highway 101. The route extended from Del Mar north to Oceanside along Coast Highway 101 (County Route S-21) via Solana Beach, Encinitas (including Cardiff and Leucadia) and Carlsbad. Only two shields for the business loop remained as of 2016. They are located at the Interstate 5 and Via de la Valle interchange. 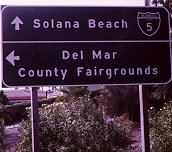 Previously there was also a "Business Route 5 Next Exit" sign on the approach to Via de la Valle along I-5 north. That sign was removed during the Interstate 5 expansion project underway throughout the 2000s.

Prior to Summer 2000, this Business Loop I-5 sign was in place along westbound San Diego County S-6 (Via de la Valle) ahead of the intersection with Jimmy Durante Boulevard. Roadwork at the time removed this sign. Photo taken in September 1998.