Interstate 170 was the planned freeway spur for downtown Baltimore from Interstate 70 to the west. The highway saw construction in the late 1970s in a residential area west of Greene/Paca Streets (MD 295). 1.25 miles of the freeway opened amid controversy in 1979. U.S. 40 remained on the parallel frontage streets of Franklin and Mulberry Streets until 1983 when the route overtook the decommissioned Interstate 170. Construction of the freeway hastened the urban blight of the area community, a trend hoped to end with the addition of the proposed .

The Interstate 170 freeway west of Downtown Baltimore. The I-170 designation was removed when Interstate 70 was formally canceled within the Baltimore city limits.

When plans for Interstate 70 through Leakin and Gwynns Falls Park were dropped in 1981, the connection to Interstate 170 was severed. Construction of that freeway was canceled due to the impacts to both Gwynn Falls Park and residential areas to the east. Interstate 170, no longer connecting to its parent, was dropped in favor of a realigned U.S. 40. 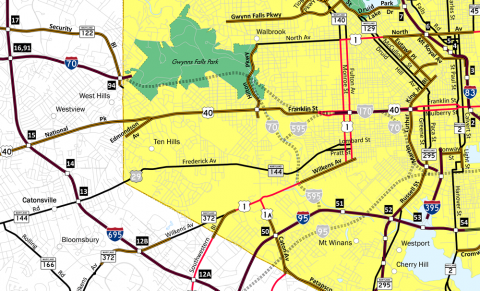 A 1980s proposal sought to retain some of the abandoned Interstate 70 plans in the form of an Interstate 595 spur from the planned east end of I-70 (near Exit 51 of Interstate 95) northwest to the planned Interstates 70/170 junction. This met opposition as well and was dropped before any work began on July 22, 1983.2 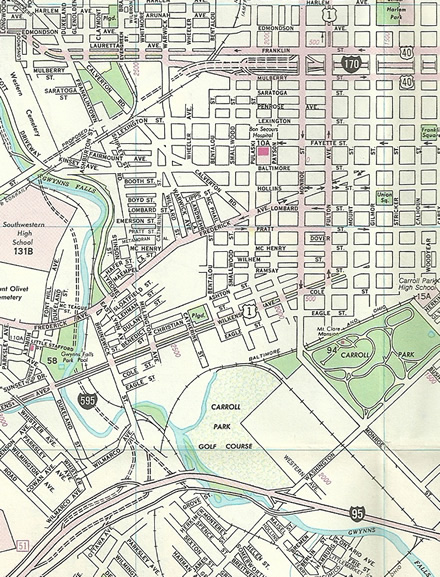 The Interstate 595 proposal made it to the 1986 Gousha Metropolitan Baltimore folding map.