Connecting I-880 in downtown Oakland with I-580 (MacArthur Freeway) and California 24 by the Longfellow neighborhood in North Oakland, Interstate 980 is the Grove Shafter Freeway. I-980 provides a seamless route with the California 24 freeway extending northeast to the Caldecott Tunnel and the East Bay communities of Walnut Creek and Concord along the Interstate 680 corridor. I-980 also forms part of a regional link from the East Bay to the Port of Oakland, Alameda and Oakland International Airport (OAK).

Interstate 980, from I-580 southwest to SR 17 in Oakland, was approved by the American Association of State Highway and Transportation Officials (AASHTO) on July 12, 1976. The Federal Highway Administration designated the route in 1983, and it was legislatively added to the California State Highway System in 1984. The final segment of the freeway opened to traffic on March 6, 1985.

The tragic Loma Prieta Earthquake struck on October 17, 1989. One of the many structures to fail during the earthquake was the Cypress Structure along Interstate 880 (Nimitz Freeway) in Oakland. This double-deck viaduct served as the principal connection from the south to the San Francisco-Oakland Bay Bridge. As a result of its closure and subsequent demolition, traffic was detoured onto Interstate 980 to reach the bridge via the MacArthur Maze, the three-wye interchange connecting I-80, I-580 and I-880. This detour remained in place until 1999, when the replacement section for Interstate 880 (Nimitz Freeway) opened on a new alignment.

Prior to 2011, Interstate 980 was unmarked on the mainline freeway, yet well signed from most approaches. This changed when confirming markers for I-980 were added eastbound after the 12th and 18th Street on-ramps and westbound after the transition from SR 24. Sign replacements adding exit numbers to I-980 east were installed in 2016. 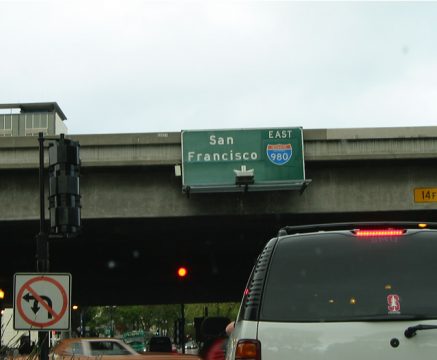 Broadway north at Interstate 880 (Nimitz Freeway) on the southwest side of Downtown Oakland. This overhead referenced I-980 east to San Francisco due to the previous closure of the Cypress Structure along I-880. It was still in place as of early 2018. Photo taken by Pete Sison (05/25/03).