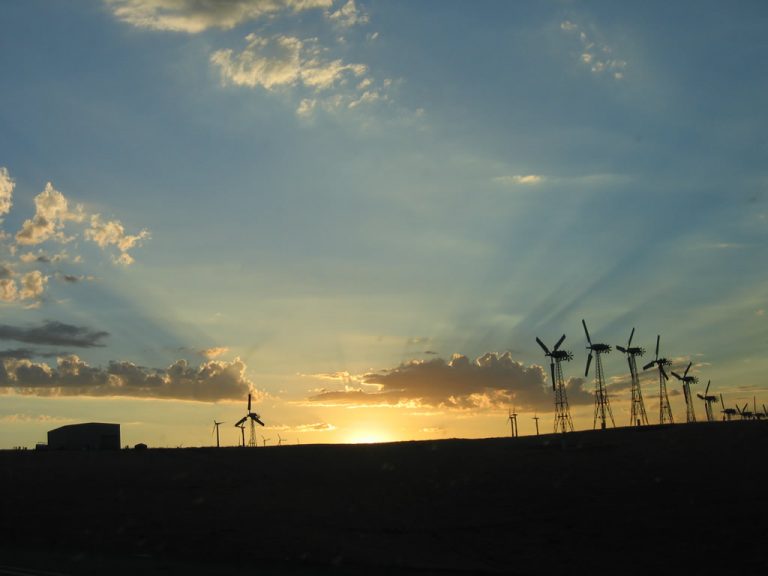 An array of wind turbines generate electricity within the vicinty of I-580 across Altamont Pass. Photo taken 06/28/06.

Interstate 580 overall connects U.S. 101 (Redwood Highway) in San Rafael with Interstate 5 south of Tracy. The northern leg of the route crosses San Francisco Bay from San Quentin to Richmond on the tolled Richmond-San Rafael Bridge. A 3.7-mile overlap takes the route south along side I-80 from Albany to Oakland, with the cardinal directions for the respective routes opposite from one another. Interstate 580 turns east onto the MacArthur Freeway from I-80 at the Bay Bridge on the Oakland side southeast to Hayward, then east through Pleasanton, Dublin toward Tracy and Modesto.

The I-580 designation was extended northwest to San Rafael via the Richmond San Rafael Bridge in 1983 when Caltrans asked FHWA and AASHTO to add new routes to the Interstate system in the Bay Area. The Richmond San Rafael Bridge spanning northern reaches of San Francisco Bay was previously California 17, and initially proposed as Interstate 180. The I-580 request was coupled with separate applications to designate California 17 from San Jose to Oakland as Interstate 880 and change the freeway portion of California 238 near Hayward to Interstate 238. These requests are approved, resulting in FAP routes 238, 580, and 880.

State Assembly Bill 2741 in 1984 made the changes to 17 and 580 in the state highway system. The following year, the resignage of the routes affected by AB 2741, including I-238 and I-880, was completed. The 580 extension was likely signed as Temporary Interstate 580 on the non-freeway segment, which dated back to the 1950s. In 1990, the freeway section of Interstate 580 was completed through Richmond and classified as FAI 580. The older freeway section remains FAP 580.

The section of I-580 between Oakland and Tracy generally follows old U.S. 50 (Lincoln Highway). Originally incorporated as part of Interstate 5W in 1964, I-580 is a fast route from northbound Interstate 5 in the Central Valley to the San Francisco Bay Area. It is also a heavily used commuter route, with several sections featuring eight or more lanes, including the section passing through the thinly populated Altamont Pass.

The following list provides the opening dates for the Interstate 580 freeway, courtesy of C.J. Moon: