The Shadeland Avenue Expressway represents a throwback to the early expressways of Indianapolis and is a remainder of the original beltway for the city, or at least what was supposed to be a beltway. Indiana 100 was conceived in 1950s as that new beltway. The highway existed for the entirety of Shadeland Avenue from its southern end near what was Interstate 74 to 82nd Street. The highway then followed 82nd Street west across the city to Lafayette Road (Old U.S. 52) in the far northwestern corner of the county. There was also a third segment that followed High School Road on the west side from Rockville Road (U.S. 36) to Kentucky Avenue (Indiana 67).

The stretch from Washington Street (Old U.S. 40) south to a spot south of Brookville Road (Old U.S. 52) was the only part built to freeway-like standards. When Interstate 465 was being built, it originally fed into Shadeland Avenue before being rerouted to the east as part of its new bypass around the Eastside. For many years, it served merely as Indiana 100 as a small spur expressway to Shadeland Avenue that was a four to six lane arterial to the north of Washington Street. Slowly, the Indiana 100 designation was decommissioned until the Shadeland Avenue Expressway lost its designation in 1999. Today, the road is simply referred to as Shadeland Avenue and there is no distinction made between the expressway and arterial portions. 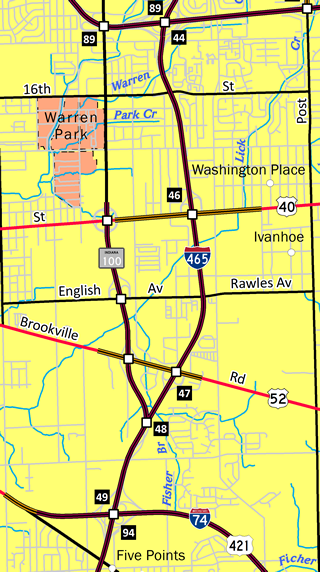