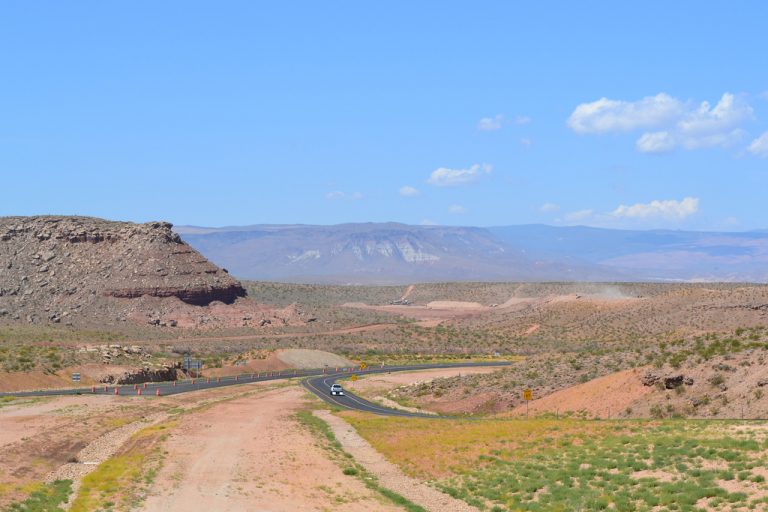 Looking west from the previous east end of SR 7 at Airport Parkway. Photo by Garrett Smith (07/07/11).

Southern Parkway curves northeast from Airport Parkway to run alongside Warner Ridge to Punchbowl Dome (el. 3,533 feet). The state route navigates northeast, from a point 1.3 miles north of the Warner Valley Road underpass, through a valley east of Washington Dome (el. 3,261 ft) to a diamond interchange connecting with Washington Dam Road at milepost 15. The eastern extent of SR 7 continues into the city of Hurricane by Sand Hollow Resort Golf Course. It ends by Sand Hollow Reservoir.

Work on two additional portions of SR 7 continued through January 2014. Opening then was Segment 3A, an extension of Southern Parkway north from Airport Parkway to Warner Valley Road in the city of Washington, and Segment 4A, a separate two lane highway leading east from Washington Dam Road to Sand Hollow Road in the city of Hurricane. The 4.5 mile link (Segment 3A) between those sections was built at a cost of $21 million.1 Bringing the total cost of Southern Parkway to $175 million at that point, it opened to traffic on January 12, 2016.2

Future road work includes $80 million in construction to build the parkway north from 3000 South to SR 9 in Hurricane (Segment 5), and another $85 million by 2035 for expansion project.1 Segment 6 will upgrade SR 9 to a limited access road, completing the 32 mile loop back to Interstate 15 in north Washington.2