In the early 20th Century, UW Eau Claire was founded and various industries and factories built in the city, most notably the Uniroyal Tire Plant. The plant closed in 1994 which devastated the city initially, but emerging businesses such as the growth of Menards’ Corporate Headquarters allowed the city to continue to grow.

Eau Claire is the only major city in Wisconsin that does not have any state highways that travel through the central city. All of the state maintain highways within Eau Claire are at least four lanes and are all either expressways or freeways with access only at intersections and interchanges. They are also all on the National Highway System.

The most significant construction projects since 1990 are the North Crossing Expressway (Wis 312) and the US 53 Freeway. North Crossing provided another bridge over the Chippewa River to serve the north side of Eau Claire. Before the project, north side traffic had to travel through Downtown Eau Claire to cross the Chippewa River. The US 53 freeway was completed in 2006 and relieved Hastings Way of major traffic backups. It also allowed for non-stop travel between I-94 and Superior. 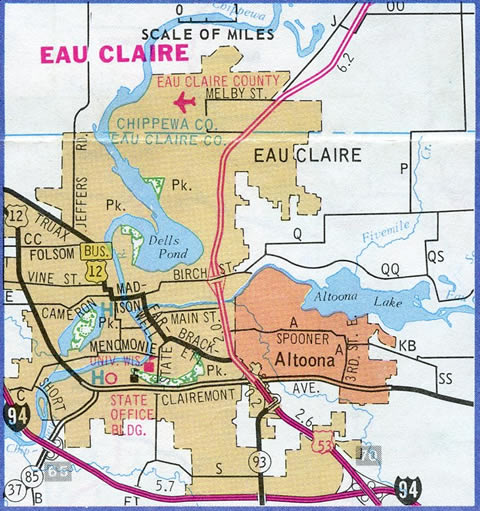 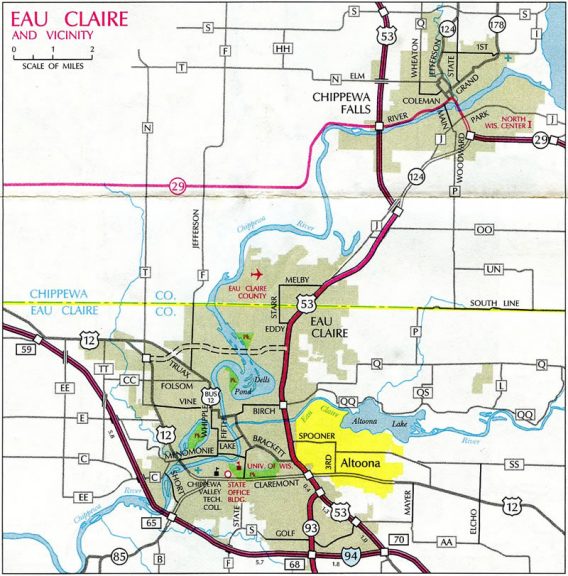 I-94 is the busiest interstate in Wisconsin and skirts by the south and west sides of Eau Claire. The interstate provides Eau Claire with access to the Twin Cities to the west, while it travels towards Madison and Milwaukee to the southeast.

US 53 is a freeway that travels along the east side of Eau Claire. It serves both local and regional traffic, serving the busiest commercial areas in Eau Claire. The freeway connects Eau Claire with the nearby communities of Lake Hallie and Chippewa Falls, as well as Rice Lake and Superior to the north. It also connects with nearby Wis 29, which branches out to Wausau and Green Bay.

Business 53 (Hastings Way) is a locally designated business route that is now maintained by the City of Eau Claire and Lake Hallie. The road is a mix of short freeway stretches and urban expressway. After the US 53 freeway was completed, traffic dropped and only local traffic used the highway. The six lane portions were reduced to four lanes, and the road was thoroughly landscaped to give an inviting look to aid businesses along the corridor. The road also has un-Wisconsin-like roadway features such as Clearview font on signs and the omitting of stop lines for traffic lights that are commonly featured at signal assemblies throughout the rest of the state.

Wis 37 is an urban expressway between US 12 and I-94 that provides easy access between I-94 and the southwest side of Eau Claire. South of Eau Claire, it mainly serves local traffic and connects with Wis 85, which leads to Wis 25 and a Mississippi River crossing into Minnesota.

Wis 93 is an urban/rural expressway in the Eau Claire Area which serves the far south side of Eau Claire. It passes by fast growing residential areas of Eau Claire and is the primary connector between La Crosse and Eau Claire, western Wisconsin’s two largest cities. It is the preferred route over US 53 south of Eau Claire by the state and national DOTs.

Wis 312 is known as North Crossing and is an expressway that connects I-94 with US 53. Originally numbered as an extension of Wis 124, the road was completed in 1994. It provided an important Chippewa River crossing, and was the only river crossing between the cities of Eau Claire and Chippewa Falls. (The Wis 29 Chippewa Falls Bypass later built is the 2nd) When the US 53 freeway was completed in 2006, North Crossing was extended from Old 53 to new US 53 and renumbered Wis 312. Wis 124 was truncated back to Lake Hallie.