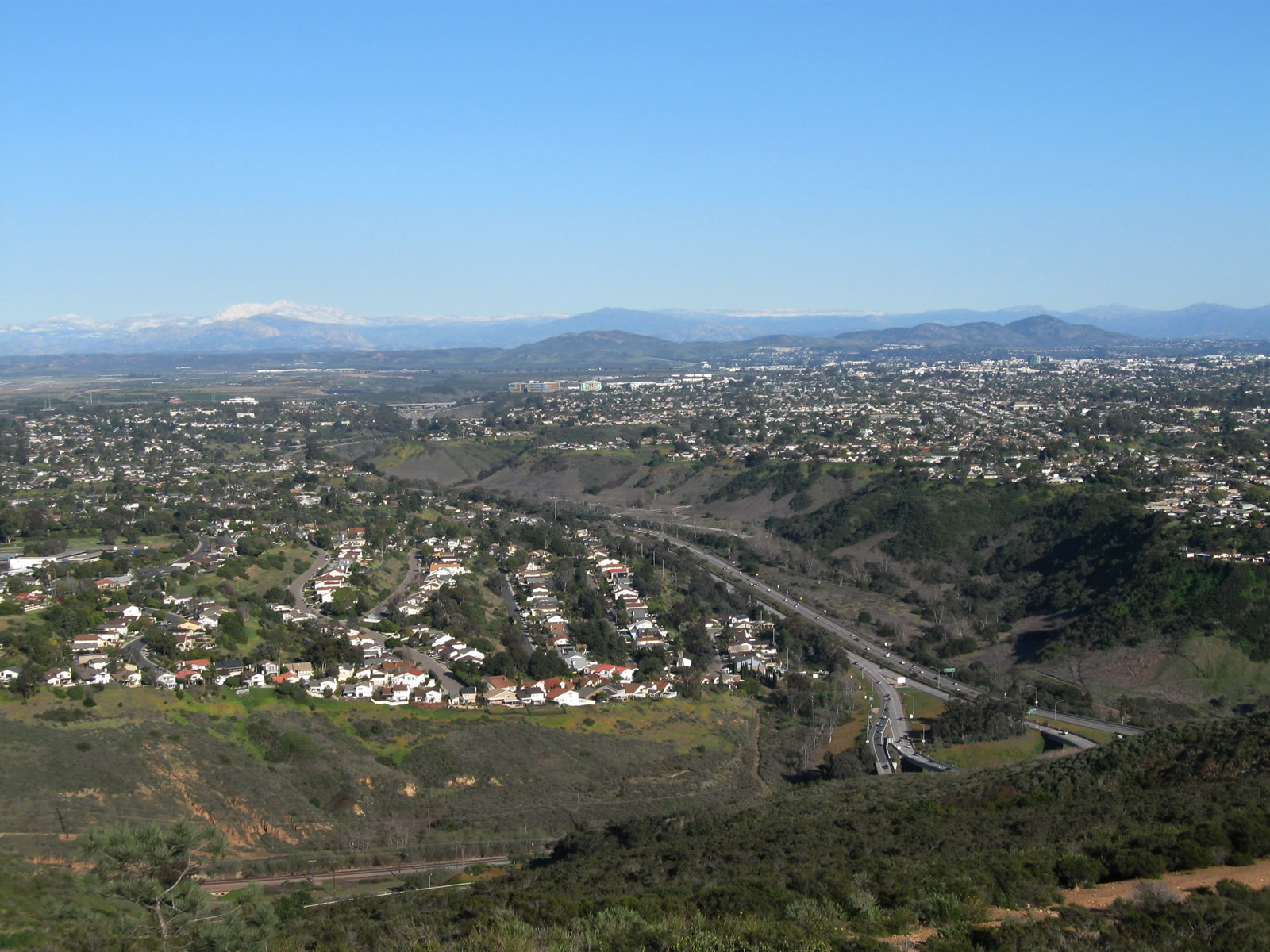 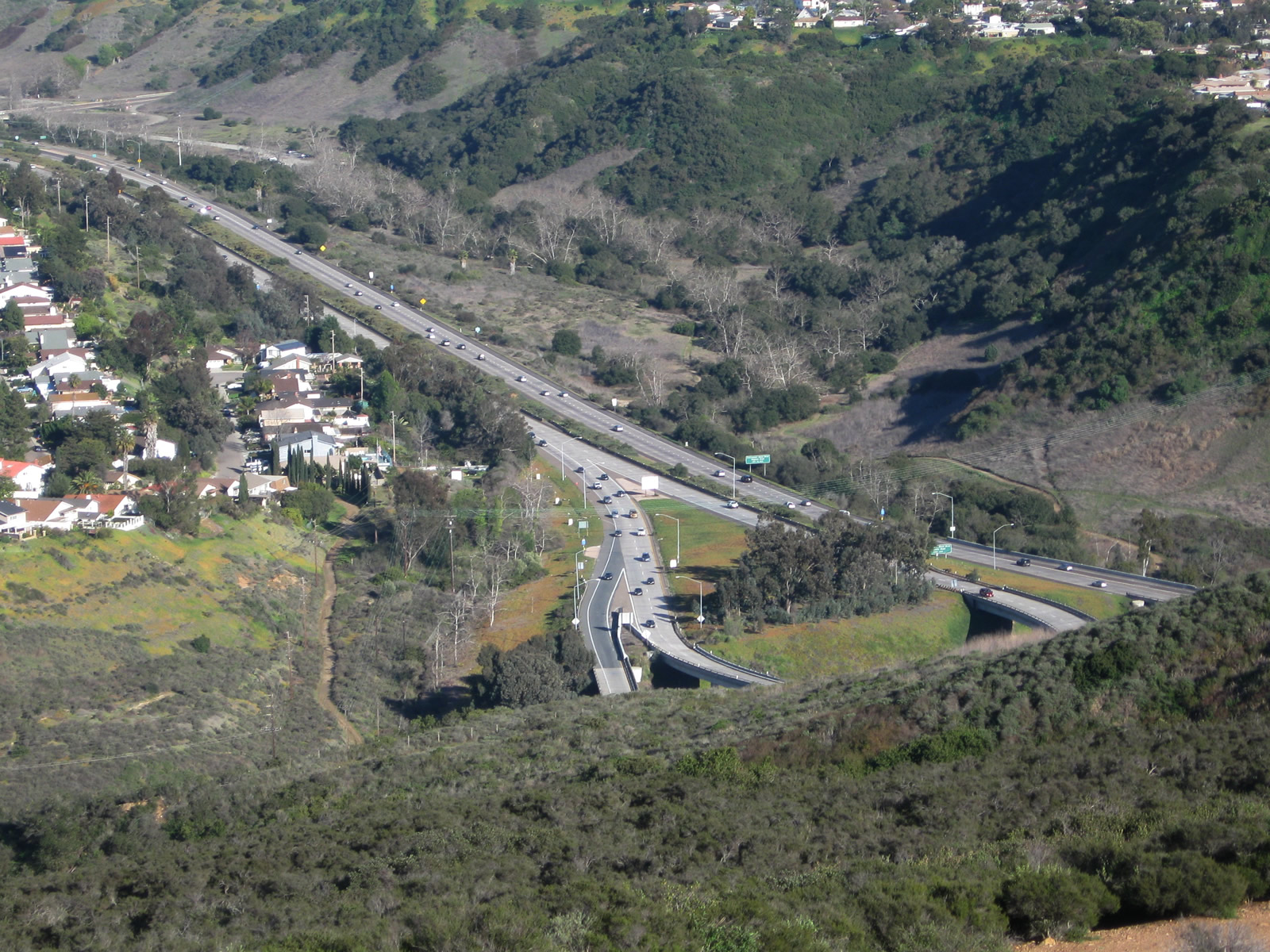 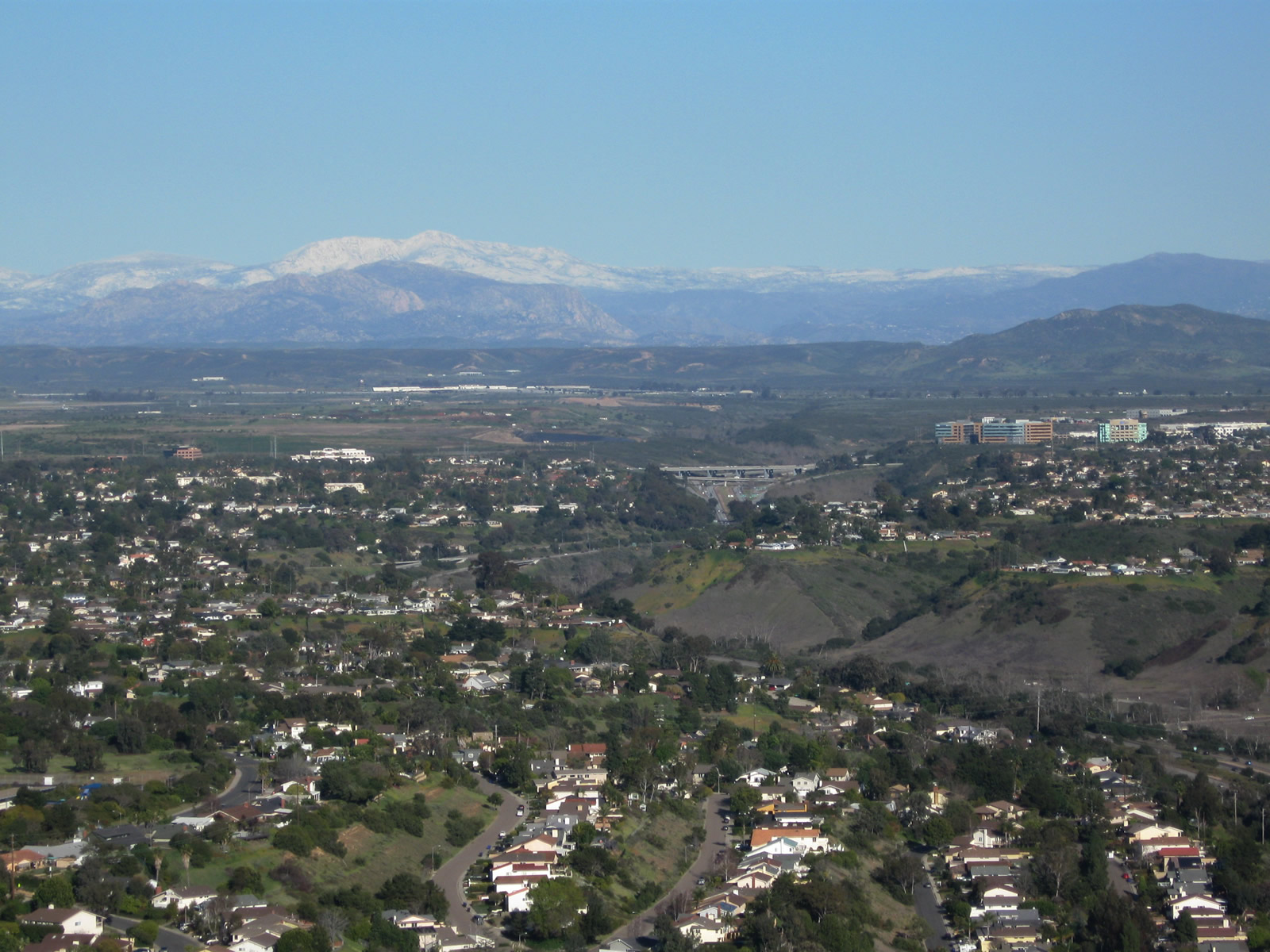 The interchange joining California 52 and Interstate 5 from on top of Mount Soledad. A small park, located off La Jolla Scenic Drive, allows visitors to look east and down on Rose Canyon and San Clemente Canyon. Interstate 5 passes through Rose Canyon, while California 52 travels east through San Clemente Canyon (part of Marian Bear Park). In the distance, the snow-capped Laguna Mountains frame a beautiful vista. Photos taken 02/27/11.

California 52 is the Soledad Freeway, starting at Interstate 5 at the foot of Mount Soledad in Rose Canyon and ending at California 67 in Santee. California 52 begins at the confluence of La Jolla Parkway and Interstate 5 and travels east through San Clemente Canyon to Interstate 805. At Interstate 805, the freeway climbs out of San Clemente Canyon, headed to the top of the old Miramar Landfill and adjacent to the current landfill. The freeway was constructed on top of the original landfill, and as such, the freeway undulates (dips) as the trash settles beneath it. At Convoy Street, motorists may reach the expanded Miramar Landfill for refuse disposal. California 52 continues east from here as an eight-lane facility, with two lanes exiting for California 163, Kearny Villa Road (Former U.S. 395), and Interstate 15. The mainline continues east, narrowing to six lanes as it passes through the Mission Trails Regional Park (widened from four to six lanes in 2008-2009). The freeway leaves the city of San Diego and enters the city of Santee near Mast Boulevard. Until March 2011, California 52 ended at its transition into southbound California 125, but the freeway is extended to California 67 through Santee as part of the Sunnyside Gateway Project.

According to a Caltrans State Route 52 Brochure , the extension of California 52 through Santee is known as the Sunnyside Gateway Project. Land acquisition for this new segment of freeway between California 125 and California 67 began in August 2002. After environmental studies and design were completed, construction began in 2007. The project cost $255 million and features four direct access, flyover ramps (75 feet tall) at the California 52-67 interchange. Originally, plans called for a staggered opening of freeway (by opening the first segment between California 125 and Cuyamaca Street first), but officials decided instead to open the entire freeway at one time.1,2,3 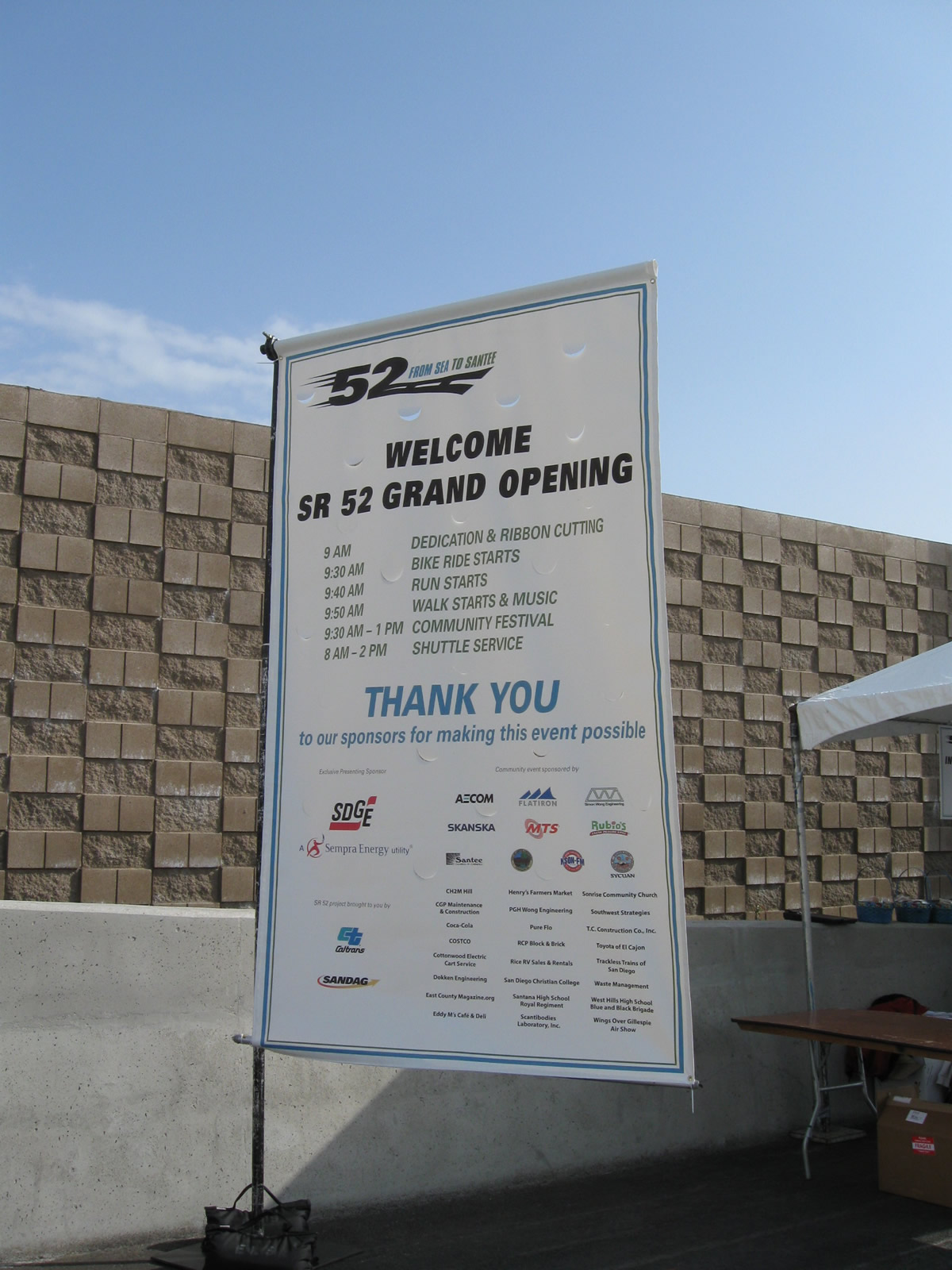 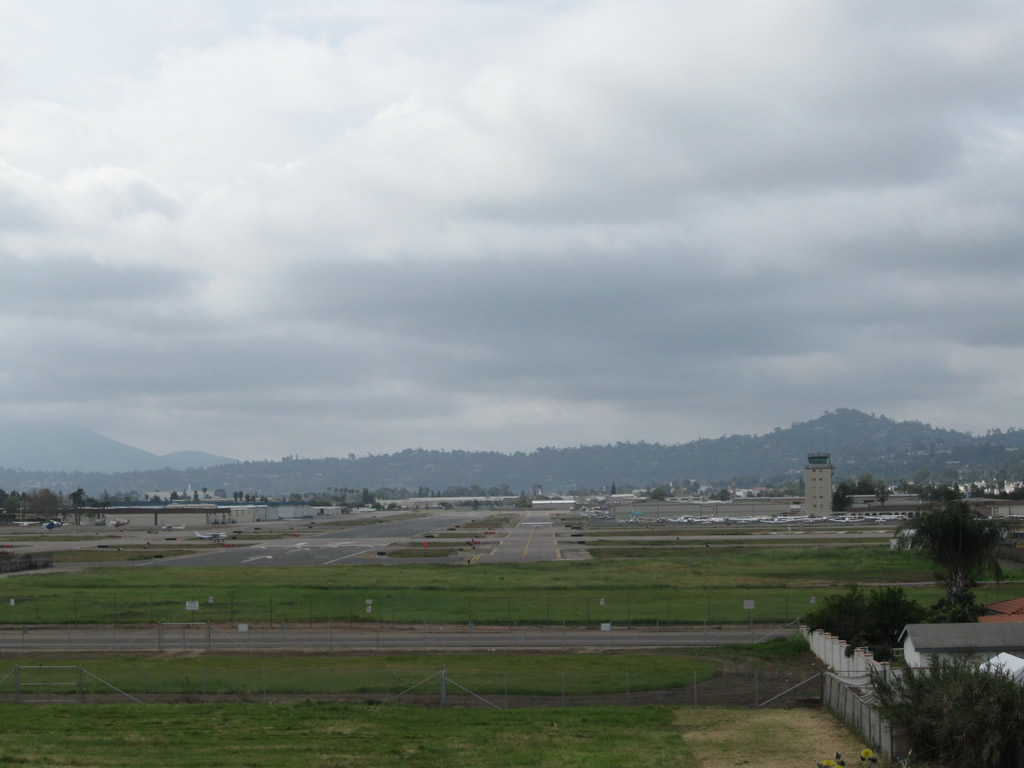 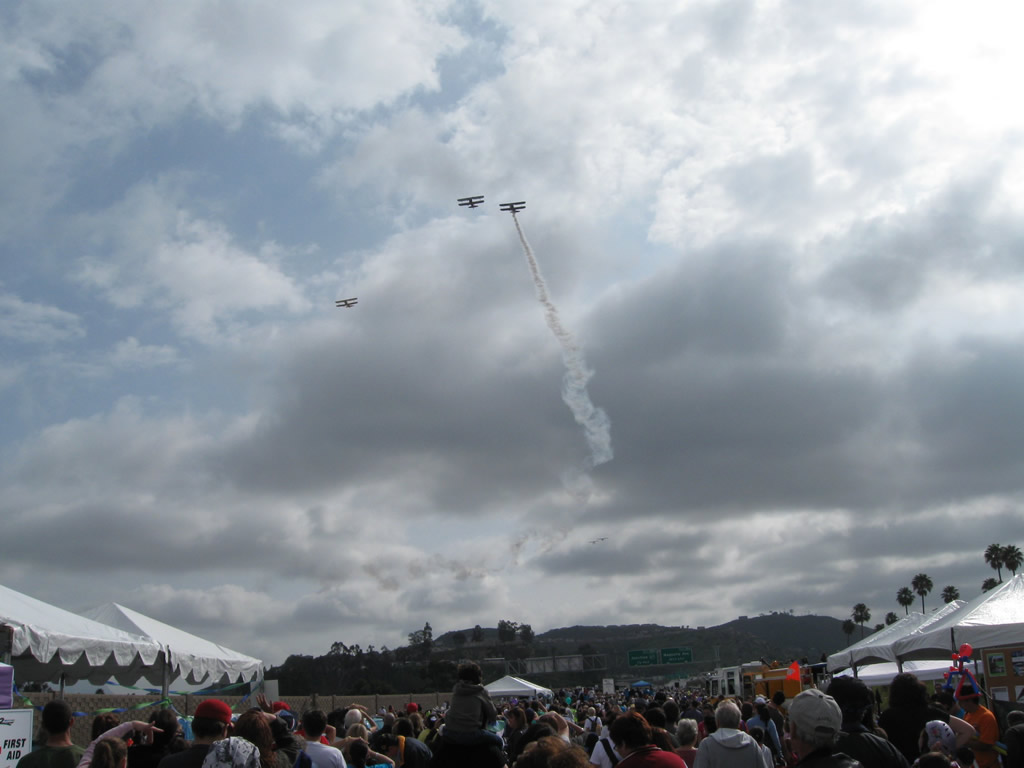 Once funding for the project was secured, the freeway was intended to open in December 2010. The date was previously moved back as a result of weather conditions and changes to the construction contract.2,3 With no further complications, the extension of California 52 east to California 67 in Santee opened on March 29, 2011.4,5

The San Diego Association of Governments, in conjunction with the city of Santee, hosted a grand opening celebration for the California State Route 52 extension on March 19, 2011. The new concrete lanes lengthened the freeway east from SR 125 to SR 67.

California 52 has been built in stages, initially between Interstate 5 and Interstate 805 and gradually extending east, with the final segment open (between California 125 and California 67) on March 29, 2011.