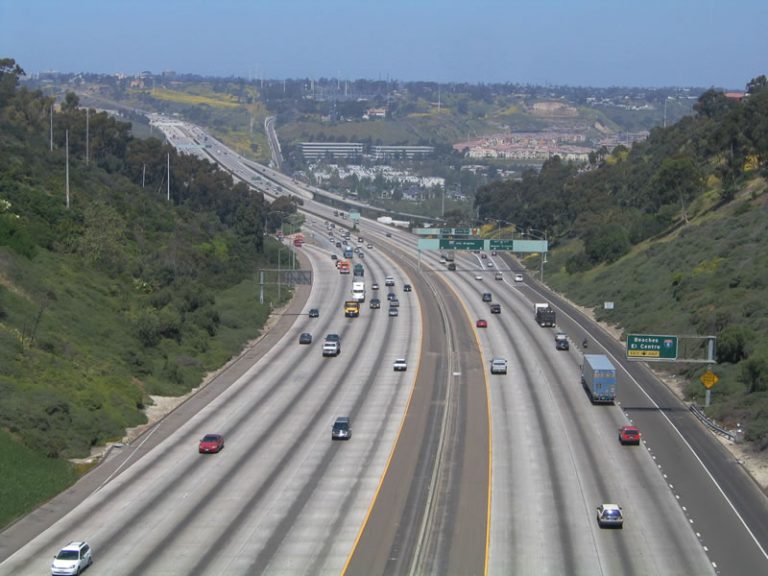 Looking north from the Roscoe E. Hazard Memorial Bridge, Interstate 805 travels from North Park and Normal Heights toward the Jack Schrade Bridge that crosses Mission Valley, the San Diego River and Interstate 8. I-805 continues toward the northern San Diego communities of Serra Mesa, Clairemont and University City before ending in Sorrento Valley near Torrey Hills.

Interstate 805 is the Inland Freeway that provides an alternate route to Interstate 5 through the city of San Diego. Named after Jacob Dekema, a pioneering force from Caltrans who helped shape the San Diego freeway system, I-805 was completed in stages, with the final section opening to traffic in 1975. The highway includes the towering Jack Schrade Bridge over Mission Valley, which carries I-805 over Interstate 8 and connects to that freeway via San Diego County's only symmetrical stack interchange.

With eight to ten lanes throughout its approximately 29 mile length, Interstate 805 has evolved into a busy commuter route from the International Border into the exploding South Bay bedroom communities of Chula Vista, including Rancho del Rey and Eastlake, and National City. The freeway passes through the Mid-City community of San Diego, then leads into the business parks at the Golden Triangle (via Governor Drive and La Jolla Village Drive) and Sorrento Valley. The freeway continues to be very busy as it rejoins Interstate 5 near Carmel Valley.

As more companies located along the route of Interstate 805 (especially the north end) and more residences were built toward the south end, additional traffic utilizes the freeway as a commuter route. Along with Interstate 5 and California 125, I-805 is one of three north-south freeways that reach Mexico.