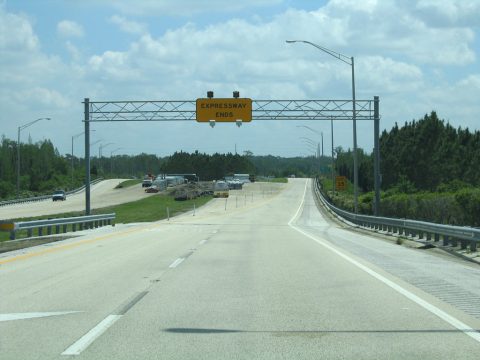 State Road 568 represents the northern extent of the 1994-opened Veterans Expressway between the Suncoast Parkway near Lake Carlton and Dale Mabry Highway (SR 597) at Lutz. SR 568 totals 3.04 miles without any exits. This portion of the Veterans Expressway was designated as SR 589 until 2001, when the Suncoast Parkway opened northward to Brooksville.

The SR 568 section of the Veterans Expressway hooked the toll road east to a stub end at SR 597. The terminus alluded to the canceled Lutz Expressway. First proposed in 1964 as part of a greater Hillsborough County freeway network, the Lutz Expressway was to provide an east-west route between western Hillsborough and Interstate 75. The segment was dropped from plans for the Northwest Expressway, the predecessor to the Veterans Expressway, due to fiscal concerns in 1984.1

County officials however maintained plans for the Lutz Expressway and held a series of public meetings on it in November 1988. The proposed route however was met with local resistance, and a citizens group, LAND (Lutz Against Non-Essential Development) was formed in opposition. The expressway concept eventually shifted to FDOT in 1990, but never progressed any further.1