Dale Mabry Highway represents an important commuter route from the Tampa peninsula northward to Carrollwood, Northdale, Lutz and Land O' Lakes in Pasco County. Collectively four different routes make up Dale Mabry Highway from MacDill Air Force Base to the merge with U.S. 41 just north of the Hillsborough County line. SR 573 follows the southernmost section from the military base 1.90 miles north to Gandy Boulevard. U.S. 92 runs north-south along Dale Mabry from there to Hillsborough Avenue by Drew Park. SR 580 dog legs 2.97 miles north along the highway from Hillsborough Avenue to Busch Boulevard by Carrollwood. SR 597 runs on the northern half of Dale Mabry for 10.64 miles through unincorporated Lutz. Dale Mabry Highway is almost universally referred to by its name or simply "Dale Mabry" by locals in place of any of its numbered counterparts.

Dale Mabry Highway was named for a pilot in World War I, who died in a dirigible crash in 1922. Dale Mabry was only 30 at the time, and became something of a local legend - pilots were much more important in those days. The road was laid out in 1924 to connect the two main airfields in Tampa, Drew Field (now Tampa International Airport) and MacDill Field. The road's importance was dramatically enhanced during World War II because of its location. In 1952 the highway was extended northward to U.S. 41 at the Pasco County Line.1

Heavy commercial development along Dale Mabry Highway and expansion of the suburbs northward from Tampa to areas like Citrus Park and Northdale swelled traffic counts and added congestion to the arterial route. Plans envisioned to address traffic in 1981 included converting a portion of the highway to a controlled access parkway. This led to the grade separated interchanges at both Hillsborough Avenue and Busch Boulevard. Further work was never completed due to preexisting development along the corridor.2 The Veterans Expressway was eventually built in 1994 to provide relief. 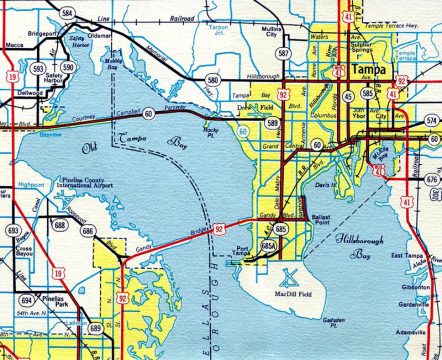 Dale Mabry Highway ran wholly within the city of Tampa per the 1955 Florida Official Highway Map. The south end was originally signed as an extension of SR 685, which joined Dale Mabry Highway from Henderson Boulevard.

Numerous shopping centers and big box retail lines the State Road 597 section of Dale Mabry Highway northward from Busch Boulevard to Northdale. Beyond there, some rural stretches remain amid a mixture of commercial and residential development to County Line Road. This includes a half diamond interchange built at the end of the Veterans Expressway (SR 568). Big box retail again fronts the east side of SR 597 in southern Pasco to its wye intersection with U.S. 41.