Several numbering proposals took place before the designations of Interstate 76 and 676 were approved in 1964. The Walt Whitman Bridge was numbered as I-395 while the current route of I-676 through Camden was designated as I-380. This sequence was brief, lasting between October and November 1958. This led to the Walt Whitman Bridge renumbered as Interstate 680, with the route through Camden and the Ben Franklin Bridge representing the Interstate 80S mainline. In 1964, when I-80S became I-76 east from Monroeville, Pennsylvania, I-680 became I-676.1 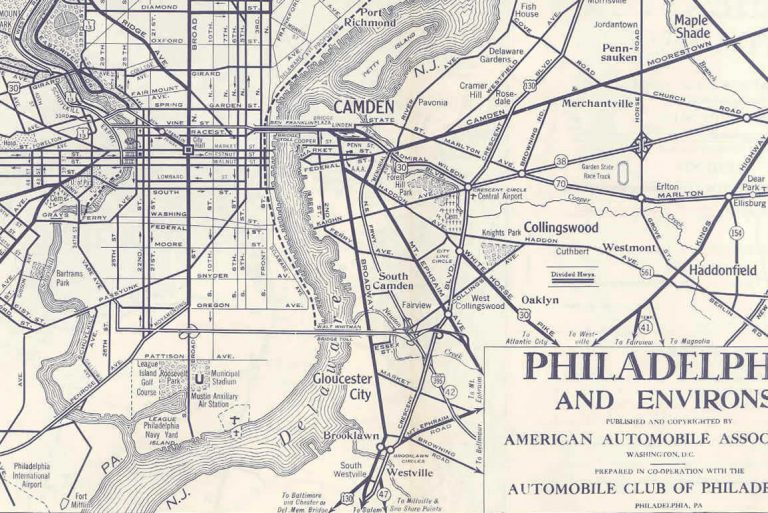 Although its time was brief, Interstate 395 made the 1959 edition of the AAA Northeast map.

Until 1973, Interstates 76 and 676 were routed opposite of what they travel today. A change was made to route through traffic onto the Walt Whitman Bridge, as I-676 through Camden was not completed until 1980 and the Vine Street Expressway in Philadelphia not until 1991.1

Interstate 76C is an unsigned route spurring 1.35 miles east from the Walt Whitman Bridge interchange with Interstate 676 to both U.S. 130 in south Camden and NJ 168 at Audubon Park. The freeway provides a high speed route between Black Horse Pike and Philadelphia. This was the only C-suffixed route in the Interstate system until Interstate 69C was designated in South Texas in July 2013.