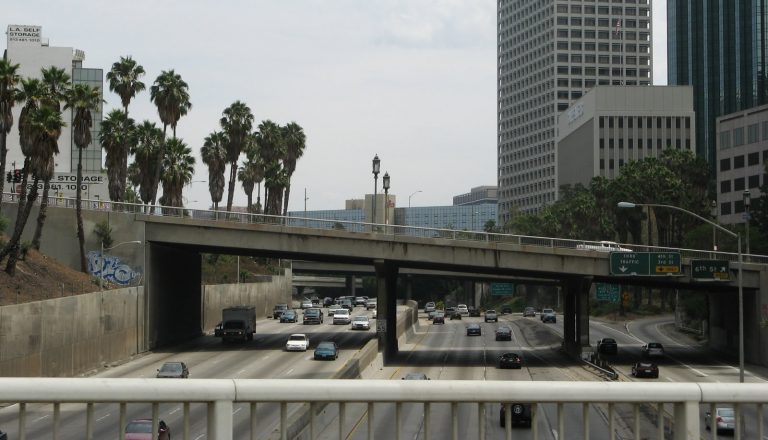 This view looks north on California 110 (Harbor Freeway) from Seventh Street in Downtown Los Angeles. The freeway separates into a local/express configuration, with collector distributor lanes accessing the various exits, and the express segment bypassing all of them to the Four-Level Interchange. 08/26/07

Interstate 110 and California 110 provide a continuous freeway link from the Port of Los Angeles at San Pedro with Downtown Pasadena. The portion of Harbor Freeway between San Pedro and Interstate 10 is Interstate-standard. This section of freeway has benefited by the construction of separated high occupancy vehicle lanes (known as the Harbor Freeway Transitway) and multimodal transportation facilities.

Once at Interstate 10, I-110 transitions into California 110 and the Harbor Freeway becomes the Arroyo Seco Parkway (Pasadena Freeway). This busy, symmetrical stack interchange joins California 110 with U.S. 101 (Hollywood Freeway) north and U.S. 101 (Santa Ana Freeway) south. The section of California 110 between Interstates 10 and 5 passes through Downtown Los Angeles and is almost always full of traffic, seemingly at all hours of day and night.

Leaving the Four-Level Interchange in Downtown Los Angeles, California 110 turns along the Arroyo Seco Parkway (Pasadena Freeway). The historic parkway travels northeast toward Pasadena with an entirely different look and feel. Gone are all of the innovative transit and high occupancy vehicle lanes that were featured on Interstate 110. Much of this freeway has seen little change since its original 1940s construction. Arroyo Seco Parkway sees very short deceleration lanes for exits, stop signs on the on-ramps, narrow or nonexistent shoulders and limited sight distances. By the time it reaches Pasadena, the limited access parkway changes into Arroyo Parkway, a wide surface street. The state route concludes at the freeway end, but it used to continue north to Colorado Boulevard (Historic U.S. 66).