Interstate 195 provides the main access route into Thurgood Marshall Baltimore Washington International Airport (BWI). The freeway travels 4.88 miles from MD 166 and a park and ride lot just north of I-95 near Bloomsbury to the passenger terminal at BWI Airport. Signed with east/west cardinal direction banners, I-195 generally travels southward from MD 166 to BWI Airport. Exit numbers count down from the exchange with I-95 (Exit 4) to MD 170 (Exit 1), which is contrary to typical exit numbering convention. 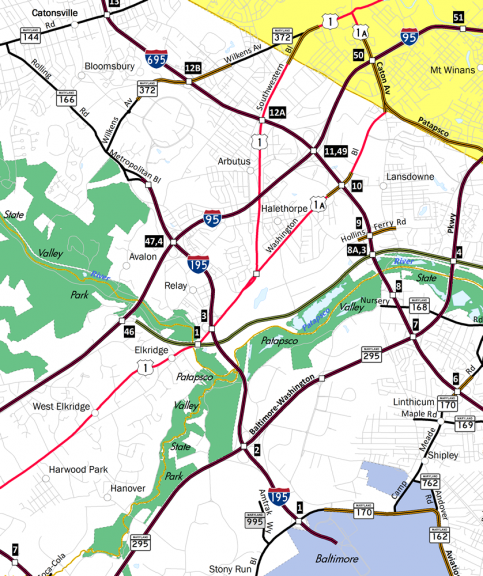 Origins of the I-195 freeway date back to 1952 with the opening of the access road to then Friendship International Airport from MD 295 (Baltimore-Washington Parkway). Named Metropolitan Boulevard and designated MD 46, the 1.86-mile freeway spur opened to service the new airport.1

1960s plans for the route focused on the stretch between U.S. 1 (Washington Boulevard) northward to MD 166 at Rolling Hills. This work coincided with construction of the University of Maryland Baltimore Campus. Signed as MD 166, the freeway opened south from I-95 to U.S. 1 in August 1974 and north to Rolling Road in 1975. The Interstate 195 designation was applied to the entire route of Metropolitan Boulevard on November 15, 1975, with cancellation of Interstate miles elsewhere in the state.1

The 1.5-mile long portion between U.S. 1 (Washington Boulevard) and the Baltimore-Washington Parkway passes through Patapsco Valley State Park. Environmental concerns delayed construction of the route until 1985. It was completed on June 20, 1990.1