Following the Henry G. Shirley Memorial Highway, Interstate 395 runs 9.91 miles northeast from Springfield through Arlington, Virginia to Washington, DC. The freeway includes a set of three tolled Express Lanes extending north from the I-95 Express Lanes at Springfield to the 14th Street Bridge across the Potomac River.

A $76 million project upgraded the exchange joining Interstate 395 with Seminary Road in Alexandria. With plans originating ten years prior, work culminated on May 4, 2016 with the opening of a pedestrian bridge along Seminary Road to Southern Towers Apartments and the Mark Center. Long term construction also included the addition of flyovers linking Seminary Road with the HOV lanes on I-395 and rehabilitation of the Seminary Road freeway overpass. The HOV ramps opened to traffic in January 2016.1 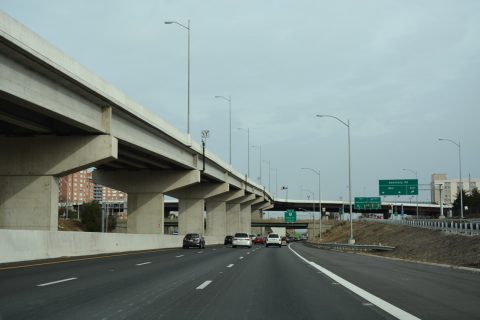 I-395 north at the HOV ramp linking the Express Lanes with Seminary Road in Alexandria, Virginia. 12/16/16

A ground breaking ceremony for construction converting the HOV lanes along Interstate 395 into High Occupancy Toll (HOT) lanes took place August 5, 2017. Costing $475 million, the project added an additional lane to the eight mile long reversible roadway. Operated by Transurban, electronic toll collection along the I-395 Express Lanes allows single occupant drivers to use the the former HOV-only lanes for a rate varying on traffic congestion.2 The Express Lanes opened for motorists on November 17, 2019.3 Work on the overall project was fully completed in December 2020. 14 bridges were rehabilitated along the I-395 corridor, and a new General Purpose Lane opened along southbound between Duke Street and Edsall Road on June 12, 2020.3,4

The Shirley Highway, including the mainline of I-95 south to Woodbridge, dates back to 1941. The initial portion of the route opened in 1944 at Arlington, coinciding with completion of the Pentagon. Designated as Virginia State Route 350, the freeway was completed between U.S. 1 at Woodbridge and the 14th Street Bridge across the Potomac River in 1952.5

Upgrades to Interstate standards between 1965 to 1975 resulted in the redesignation of State Route 350 as Interstate 95. The northernmost portion, between SR 7 and the 14th Street Bridge was completed in 1975, just two years before I-95 shifted to bypass D.C. along the eastern half of the Capital Beltway. Reconstruction included the addition of the reversible HOV roadway between the north and southbound roadways.5

Further south, a massive undertaking involved rebuilding the Springfield Interchange from a cloverleaf into a multi level systems interchange. The eight year project kicked off in March 1999 and ran through July 2007.5 Upgrades included high flyovers for the I-95 mainline turn between the Shirley Memorial Highway and Capital Beltway.