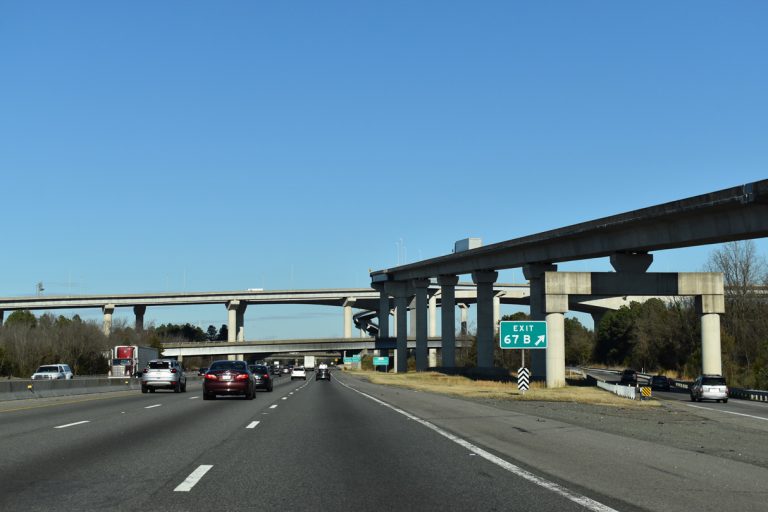 179 miles long in Virginia, Interstate 95 joins the Washington, DC area with Richmond both as a commuter route from Fredericksburg northward and a through route for travelers between the Northeast and Southeastern United States. The freeway varies between six and eight lanes from Petersburg northward to the Woodrow Wilson Bridge.

The I-95 Express Lanes accompany 31 miles of Interstate 95 between Stafford and the Springfield Interchange with the Capital Beltway. The reversible roadway flows northbound during weekday mornings and southbound during evening peak hours. Prior to 2014, the two to three lane roadways were restricted to HOV-2 eligible vehicles. Work started in August 2012 both expanded and converted the HOV roadway into a tolled facility, allowing non-HOV travelers the option to use the lanes at a variable toll rate. Tolls along the Express Lanes are charged electronically with E-ZPass transponders. HOV-3 traffic may use the Express Lanes free of charge, but only with an E-ZPass Flex account.

Speed limits along 597 miles of rural Virginia Interstate highways were permitted to increase to 70 mph by Governor Bob McDonnell in October 2010.1 This included a 35 mile stretch of Interstate 95 between Hanover and Spotsylvania Counties, where signs with the higher limit were installed by early December 2010.2 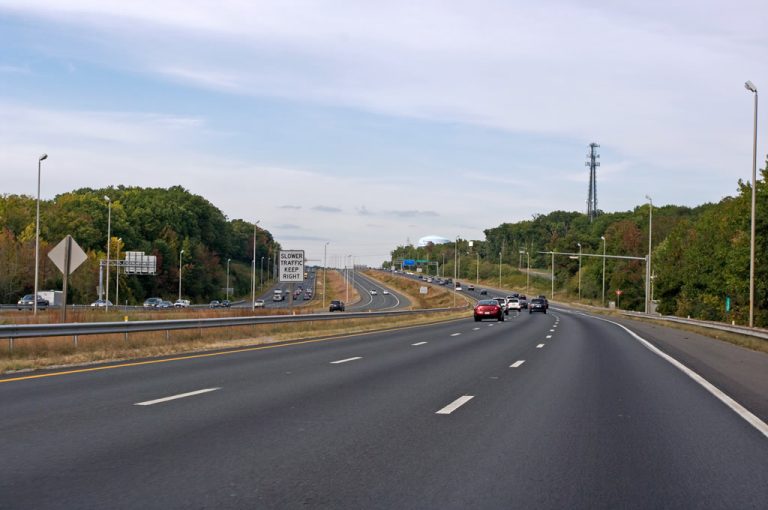 Through Northern Virginia, Interstate 95 expands with the reversible toll Express Lanes between the north and southbound roadways. This northerly view looks at the three roadway configuration of the freeway at milepost 153.2. Photo by Will Weaver (10/11/09).

Previously beginning just south of Exit 152 (SR 234), the Express Lanes travel northward to the Springfield Interchange, where they transition down the middle of Interstate 395 to the 14th Street Bridge in Washington, DC. A $940 million public-private partnership funded expansion of the previous-HOV lanes and a nine mile southward extension of the reversible roadway from Dumfries to Triangle. All 29 miles of the I-95 Express Lanes, including entrance and exit ramps, opened to motorists on December 14, 2014. Tolling along the lanes commenced on December 29, 2014.3,4

The two mile Southern Extension of the managed lanes to Garrisonville Road (Exit 143) was built from July 2016 to December 2017. Completed ahead of schedule, $50 million in construction added entrance and exit ramps south of Garrisonville Road.5 The lanes commenced operations on October 31, 2017 southbound and November 1st northbound. Construction started in Spring 2019 lengthens the Express Lanes another ten miles from Garrisonville Road to U.S. 17 / U.S. 17 Business (Warrenton Road) at Exit 133. Costing $595 million, work on the Fredericksburg Extension runs through late 2022. 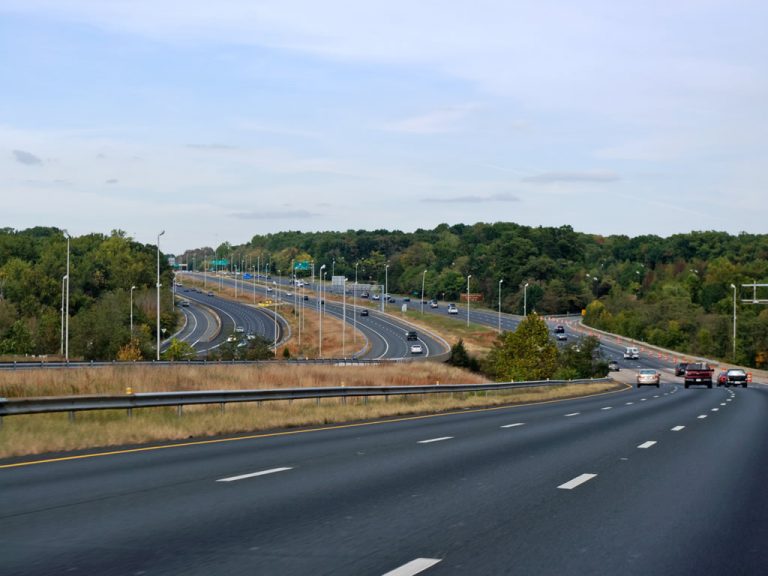 Interstate 95 at the car rest area south of Exit 156. Ramps occasionally allow drivers access between the tolled Express Lanes and the mainline of the freeway. Photo by Will Weaver (10/11/09).

Designated the Henry G. Shirley Memorial Highway, I-95 from Woodbridge north to D.C. opened as Virginia Route 350 before the Interstate system was designated. The Shirley Highway was signed as Interstate 95 into Washington, D.C. until plans to complete the freeway into Prince Georges County, Maryland were cancelled by 1977. I-95 north of the Capital Beltway at Springfield was redesignated as Interstate 395.

Interstate 95 between Petersburg and Richmond opened in 1958 as the Richmond-Petersburg Turnpike. Tolls were collected on the roadway until 1992, when bonds were fully paid off. South from Petersburg, Interstate 95 replaced U.S. 301 as the main route to Emporia and Rocky Mount, North Carolina. Portions of this freeway were not completed until 1982.

Tolls were previously proposed along Interstate 95 between Petersburg and the North Carolina state line as part of the "Interstate 95 Corridor Improvement Program." Toll money was sought to generate funds for needed improvements.