Albuquerque’s metropolitan area includes fast-growing Rio Rancho, with its own Central Business District. Outlined here is what remains within the New Mexico state road system, Historic U.S. 66 and 85, and the freeway network.

Some of the historical information (especially regarding state roads) provided on this guide was researched using Steve Riner’s New Mexico Highways web site. 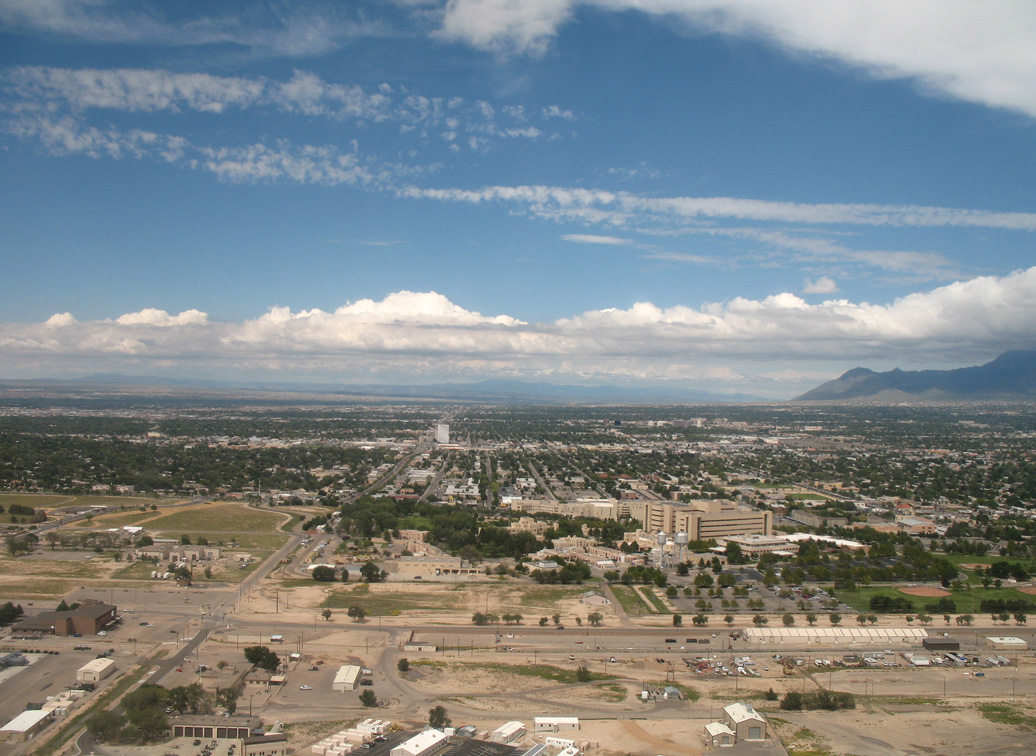 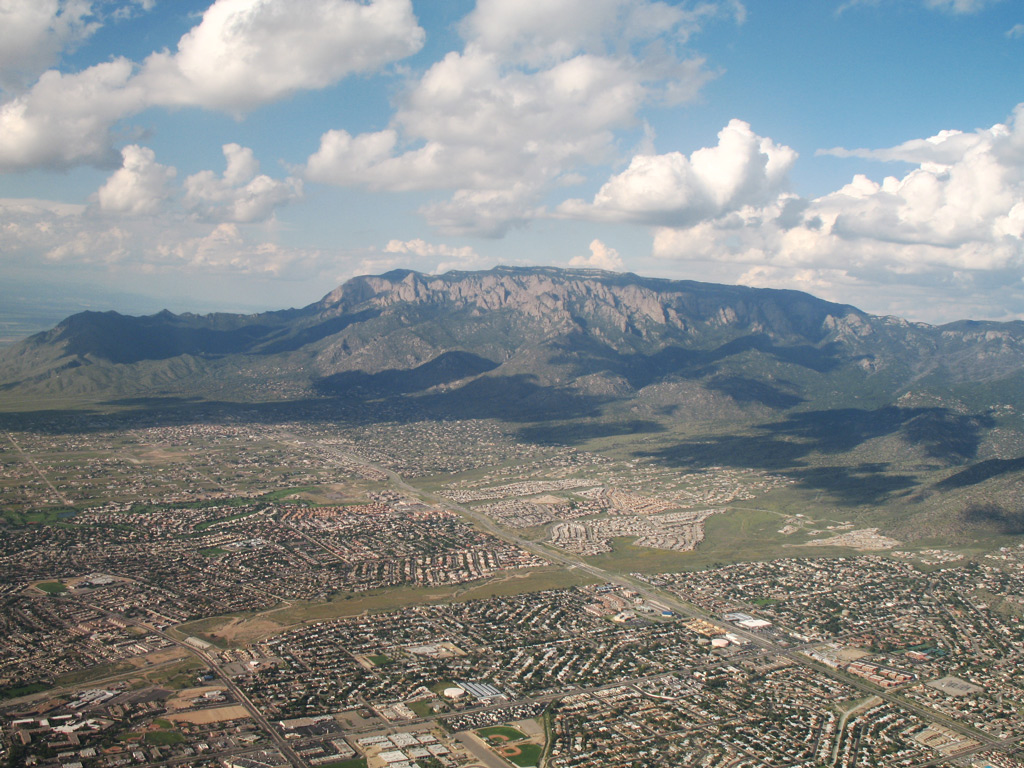 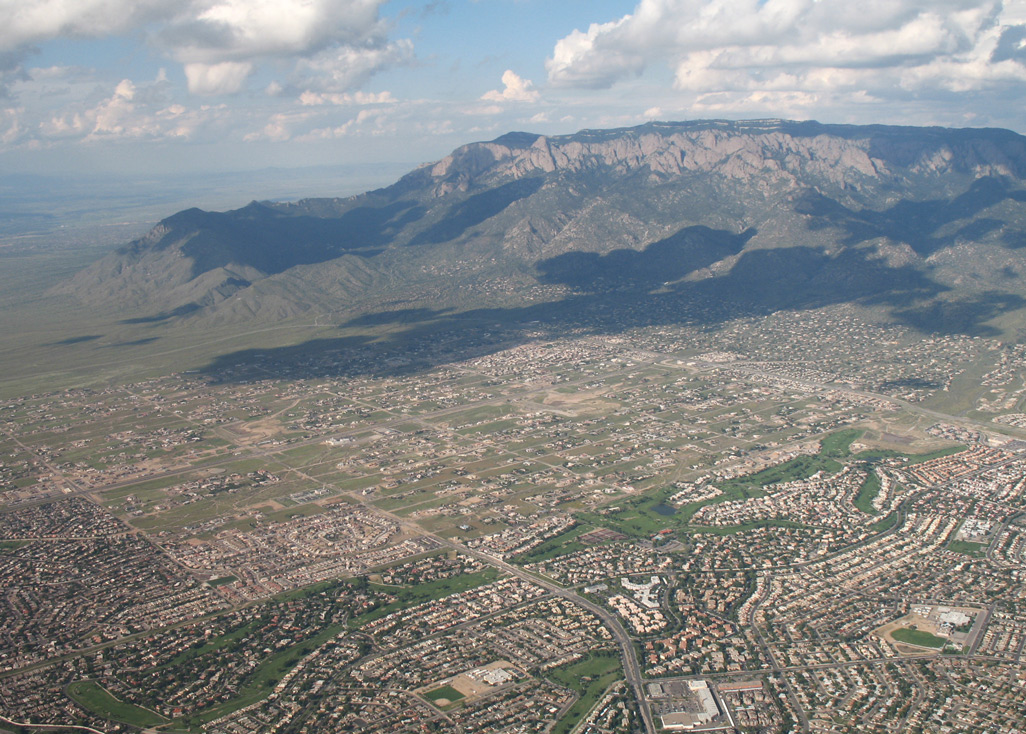 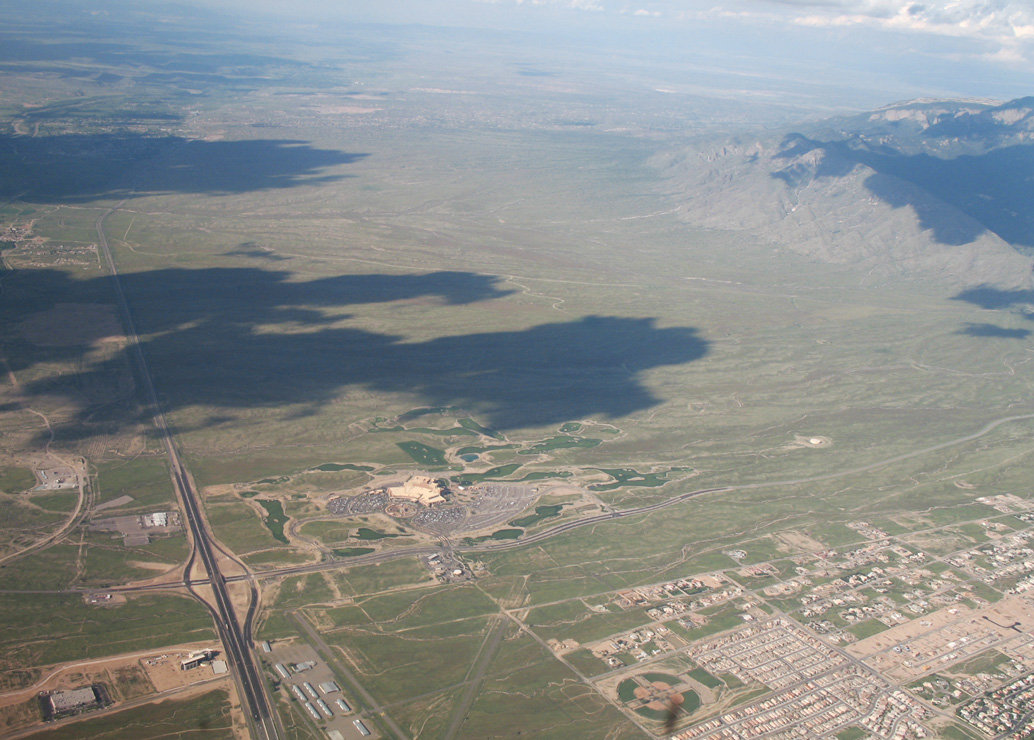 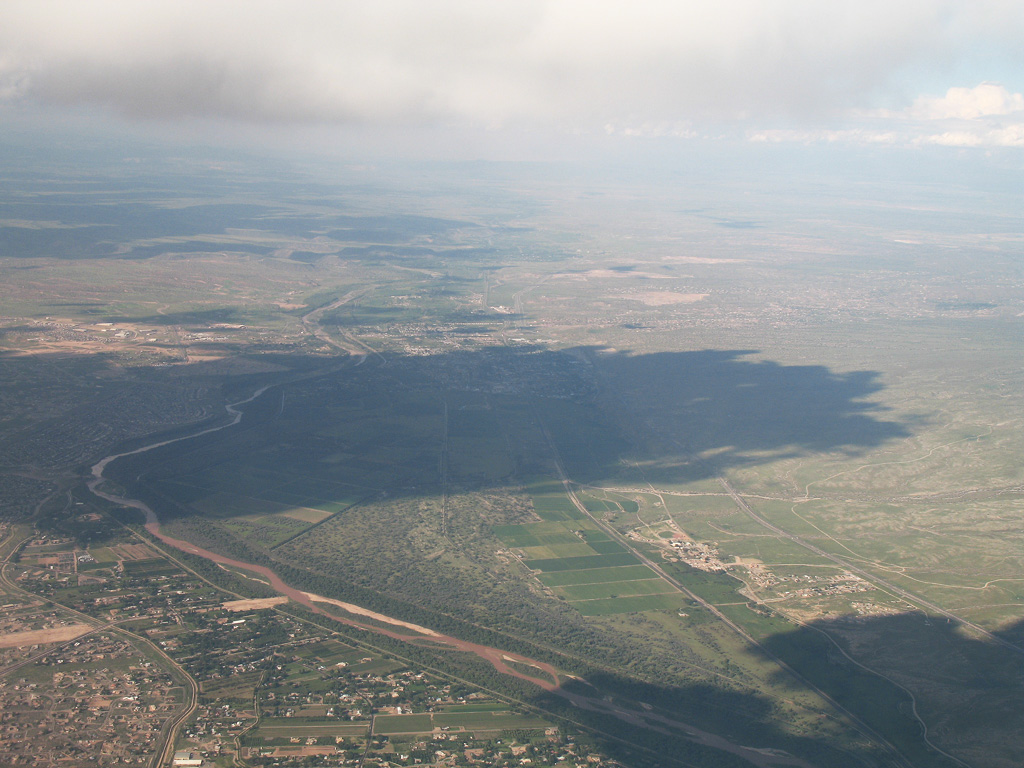 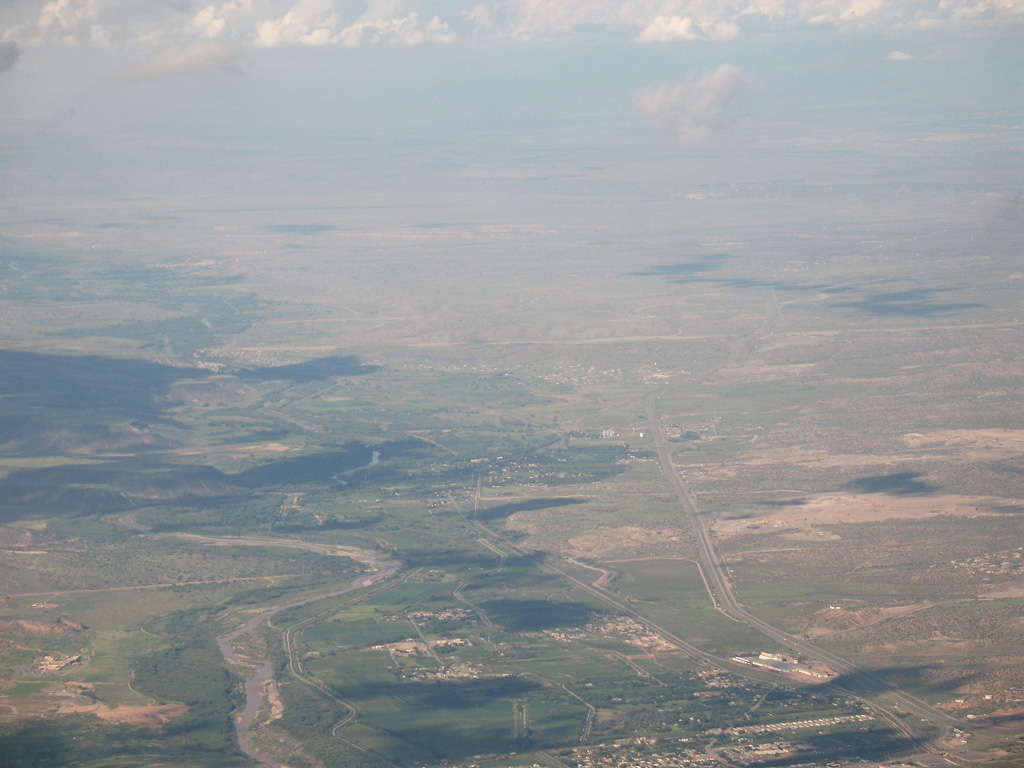 Interstate 25 is known as the Pan American Freeway through the Albuquerque metropolitan area. The freeway joins the Sandoval County cities of Bernalillo and Rio Rancho with Albuquerque and South Valley as the main north-south route. Overall capacity ranges from four lanes through the Sandia Pueblo to ten lanes outside of Downtown.

Portions of Interstate 25 were improved through the mid-2000s as part of the GRIP initiative. A $15.5-million project upgraded the freeway at NM 556 (Tramway Road) by expanding the road to six lanes and replacing the 1955-58 overpasses above Tramway Road. Work at Exit 234 was completed by Spring 2006.

The Tramway Road interchange work is part of an overall GRIP project to expand Interstate 25 northward from Albuquerque to Bernalillo. Work starting in 2008 widened the freeway to six overall lanes from NM 556 to U.S. 550, through Sandia Pueblo and the city of Bernalillo.1

A second Albuquerque area GRIP project was the reconstruction of Exit 220 with NM 500 (Rio Bravo Boulevard). Growth in the Mesa Del Sol master-planned community included an extension of University Boulevard south to the Isleta Amphitheater entertainment venue. Improvements at the interchange enhanced accessibility to the area. A second interchange to Mesa Del Sol via the planned Mesa Del Sol Boulevard was also proposed along Interstate 25.

Replacing the post-1937 routing of U.S. 66, Interstate 40 (Coronado Freeway) crosses the city of Albuquerque from west Bernalillo County and the Laguna Indian Reservation to Cibola National Forest and Tijeras. Like Interstate 25, the freeway varies from four lanes in rural areas to ten lanes near Downtown. Much of the freeway through Albuquerque opened in 1962.

Several GRIP projects upgraded Interstate 40 across Bernalillo County. Most notably, the “Big I” project at the exchange joining Interstates 40 and 25, was completed in 2002 after just 24 months of construction. That project rebuilt a low-speed directional interchange between the two freeways into a multi-level interchange with high speed flyovers. Work on the ramps coincided with frontage road construction and other area improvements.

Other interchanges along the Coronado Freeway that were upgraded include the exchange at Coors Boulevard. Originally a directional-cloverleaf interchange with left-hand ramps, work at Exit 155 included the addition of flyover ramps and adjacent improvements ranging from new pedestrian bridges and a new Coors Boulevard overpass. This work was completed in 2006.

Further west in rural Bernalillo County, a completed GRIP project redesigned the Rio Puerco interchange on and off-ramps in conjunction with a new roundabout at the Route 66 Casino. Work was completed between August and November 2007.

Additional projects included the redesign of the West Central Avenue (Historic U.S. 66) split and Atrisco Vista Boulevard Interchange (Exit 149) west of Albuquerque. Anticipated development along Paseo del Volcan and projected traffic increases justified the construction. Work removed the wye interchange with Central Avenue and redirected all movements to the adjacent diamond interchange with Atrisco Vista Boulevard (NM 500). Prior to July 2011, guide signs on I-40 referenced Exit 149 as Paseo del Volcan. The assemblies were changed once plans for the future Paseo del Volcan alignment shifted westward to no longer tie into I-40 at Exit 149.2

Business Loop Interstate 40 was the designation given to U.S. 66 after the route was decommissioned through Albuquerque along Central Avenue. The designation was removed from the state logs sometime during the 1990s, but several reassurance signs remained in the field in 2008, with at least three still standing in 2017.

Traveling through Rio Rancho to the north, U.S. 550 is the lone U.S. highway serving the Albuquerque metropolitan area. The route replaced NM 44 when the highway was four-laned by 2000. U.S. 550 ends at a single point urban interchange (Exit 242) with Interstate 25, opposite NM 165 in Bernalillo. The highway joins Albuquerque and Rio Rancho with Farmington to the northwest.

There are no U.S. highways remaining within the system in Albuquerque. Historic U.S. 66 however, is acknowledged along two routes through the area. The pre-1937 alignment follows Iseleta Boulevard northward (along what would later be signed U.S. 85) to Bridge Boulevard across the Rio Grande and into the city of Albuquerque. Turning northward on 4th Street, old U.S. 66 traverses Downtown en route to Los Ranchos de Albuquerque and Alameda. NM 313 continues old U.S. 66/85 northward from NM 556 (Roy Avenue) into Sandoval County. State Road 333 continues the route through Bernalillo and Santa Ana Pueblo.

The post-1937 route of U.S. 66 follows all of Central Avenue across Albuquerque and frontage road segments along Interstate 40 west to the Rio Puerco and east along NM 333 to Tijeras. Central Avenue was also previously a part of Business Loop I-40, but that designation was also decommissioned. NM 333 follows old U.S. 66 east from I-40 (Exit 167) Albuquerque to Business Loop I-40 in Moriarty.

U.S. 85 was replaced wholly by Interstate 25 within the state of New Mexico by 1990. The route followed the pre-1937 routing of U.S. 66 throughout the Albuquerque area.

Additionally U.S. 85 Alternate route existed in Albuquerque along 2nd Street, between Bridge Boulevard and Alameda in conjunction with 3rd Street southbound through Downtown. Eliminated by 1988, the bannered route was previously replaced with NM 47 in 1977. NM 47 would later shift eastward to Broadway Boulevard, leaving 2nd Street as an unnumbered roadway.3

There are a handful of state routes serving the Albuquerque metropolitan area. Many of the those designated in the original system were decommissioned by 1988. The following list catalogs both those remaining and those previously turned back. Some mapping companies and geodata providers continue to acknowledge many of these routes.

NM 47 was replaced by U.S. 85 Alternate along 2nd Street within the city of Albuquerque during the 1950s. With the decommissioning of U.S. 85 Alternate by 1988, the designation was reassigned. A later shift moved the state road onto Broadway over then-NM 361. NM 47 followed Broadway Boulevard north from South Valley through Downtown to Candelaria Road where it turned west. Candelaria Road returned the route to 2nd Street, which leads north to Alameda and 4th Street (NM 556 south / former NM 313 south) in Sandia Pueblo. A mileage exchange made by the state in 2010 truncated NM 47 beyond the south Albuquerque city line in exchange for Dennis Chavez Boulevard west and Atrisco Vista Boulevard north for an extension of NM 500 and Paseo del Vulcan in Rio Rancho as  newly designated NM 347.

Like NM 313 to the north, NM 314 followed the U.S. 66/85 along Iseleta Boulevard and Bridge Boulevard south from central Albuquerque to South Valley and Interstate 25 at Exit 213. Truncation north of Exit 213 occurred in 1988, leaving an 18.50-mile segment southward to Business Loop I-25 in Belen.

Paralleling Interstate 40 east from Albuquerque to Camuel and Tijeras, NM 333 follows old U.S. 66 along on a 27.72-mile route. NM 333 begins at the Central Avenue intersection with NM 556 (Tramway Boulevard) adjacent to Interstate 40 at Exit 167. 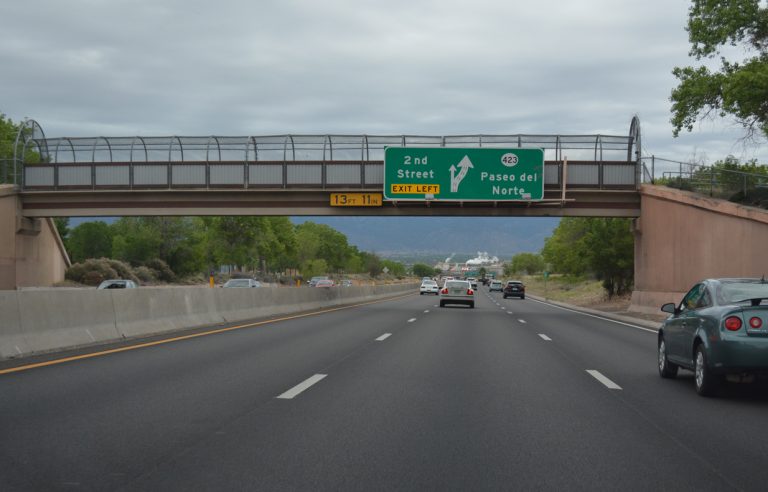 NM 448 constitutes a 7.67 mile loop east around Rio Rancho. The state road branches northeast from NM 45 (Coors Bypass Boulevard) at Cottonwood Mall along Coors Boulevard to NM 528. Corrales Road leads the remainder of the route through the village of Corrales to NM 528 (Pat D’Arco Highway).

Prior to 2012, NM 448 traveled south along Coors Boulevard along a 13.0 mile course to St. Josephs Avenue in Albuquerque. Originally NM 448 traveled between Central Avenue and NM 46 (Corrales Road). In 1988 the route replaced NM 46 north of NM 528 (Alameda Boulevard) into Sandoval County.

NM 528 constitutes a 13.40 mile loop west from 2nd Street (former NM 47) in North Valley through Rio Rancho to U.S. 550 at Santa Ana Pueblo. The state road previously originated west from Interstate 25 (Exit 233) along Alameda Boulevard. The 1.96 mile segment east of NM 47 was decommissioned and reinventoried by NMDOT as FL-4020.

NM 556 follows Roy Avenue west from I-25 to a roundabout with 4th Street (NM 313). NM 556 overtakes 4th Street across the North Diversion Channel to conclude opposite the north end of 2nd Street (former NM 47) at North Valley.

Linking I-25 with the Sandia Peak Aerial Tramway, Tramway Road was constructed in the early 1970s through Sandia Pueblo. Succeeding work built Tramway Boulevard south to I-40 in the 1980s.

Originally eight miles in length, NM 194 was truncated to one half mile in the mid-80s, and removed completely by the early 2000s. The state road followed Rio Grande Boulevard north from Central Avenue (old U.S. 66) in Albuquerque to NM 528 (Alameda Boulevard) in Alameda.

NM 303 represents a former six-mile route along Desert Road and 2nd Street between NM 47 (Broadway Boulevard) in South Valley and Bridge Boulevard (former-NM 314) south of Downtown. NM 303 replaced the relocated NM 47 between 1988 and its decommissioning in 2000.

Prior to a mileage swap between the city of Albuquerque and NMDOT for a section of Coors Boulevard (NM 45) in 2010, NM 345 overlaid 3.65 miles of Unser Boulevard. Unser Boulevard comprises a lengthy arterial joining the Far West suburbs of Albuquerque with Rio Rancho in Sandoval County. The state road began at Central Avenue (Historic U.S. 66) and ended at St. Josephs Avenue.

This route followed San Mateo Boulevard south from Interstate 25 at Exit 230 to Central Avenue (Historic U.S. 66) in Albuquerque. An unmarked route, NM 367 traveled just five miles and was designated from the 1960s to the 1980s.

State Road 422 was the predecessor to Interstate 25 along the Pan American Freeway through Albuquerque. The north leg of the route followed Roy Avenue west to U.S. 85 (4th Street) in Sandia Pueblo.

A former three-mile route along Edith Boulevard between Osuna Road (former NM-98) and Alameda Road (former-NM 296) in North Valley. NM 425 was removed by 1990.

The Northwest Loop Road was a proposed arterial bypass of the Far West side of Albuquerque and Rio Rancho. Except for a short segment at Hawk Site in far northern Rio Rancho, the roadway remains unbuilt. West from there, the project path of Northwest Loop Road stays north of Mariposa East to Mariposa Ranch and the Rio Ranch Estates area. Outside of Rio Ranch Estates, the alignment turns southward en route to Interstate 40, beyond the western fringes of suburban development.

Plans for Northwest Loop Road called for the construction of a two-lane gravel road with upgrades to a paved highway as development warrants.

Paseo del Vulcan is a 30.6 mile arterial belt route proposed from Interstate 40 to U.S. 550. The southern segment through West Side Albuquerque runs north from Senator Dennis Chavez Boulevard to Interstate 40 at Exit 149, and then beyond to Petroglyph National Monument. This section of Paseo del Vulcan was renamed Atrisco Vista Boulevard by the New Mexico Department of Transportation (NMDOT) in 2011, as plans for the future roadway shifted further west to a future interchange with I-40.2 Annexations by the city of Albuquerque placed Atrisco Vista Boulevard within the city limits from Double Eagle II Airport (AEG) northward to the west extension of Paseo Del Norte at Quail Ranch.

Within Sandoval County, Paseo del Volcan serves the Central Business District of Rio Rancho between Iris Road and Unser Boulevard. Completed in 2011, the principal arterial was established as New Mexico State Road 347 for 7.14 miles east from Unser Boulevard (FL-4081) to U.S. 550 at Enchanted Hills . The remainder of the route in Rio Rancho remains unbuilt, including the southwest extension through Rio Rancho Estates into Bernalillo County.