Pittsburgh, once a distant trading post known as Fort Duquesne at the confluence of the Ohio, Allegheny, and Monongahela Rivers, is now a vibrant, world-class city. Known for steel mills in the 1970s, Pittsburgh now has a diverse economic base, with many industries relocated in the region.

The city is oriented around the rivers. Most major routes parallel one of the three rivers coming into Downtown, and those that do not may traverse the nearby mountains through tunnels or cuts. Pittsburgh is best known for its geography and its stunning skyline at the headwaters of the Ohio River. Best viewed from Mount Washington, the skyline is especially beautiful from above the skyscrapers.

Looking Downtown, the city is organized into a rough grid based on the rivers, but that grid is quickly lost as one heads eastward. Forbes Avenue, Boulevard of the Allies, and Bigelow Boulevard each provide access to the eastern part of the city. Bigelow Boulevard (formerly U.S. 30, now Pennsylvania 380) is also the old Lincoln Highway route.

Interstate 76 passes north of the Pittsburgh metropolitan area, passing through eastern reaches of it at Monroeville. Following the Pennsylvania Turnpike, I-76 travels in a southeasterly trajectory from Youngstown, Ohio, toward central Pennsylvania and Harrisburg. This toll route carries a significant amount of truck traffic, though with annual toll increases, shunpiking for alternate routes such as I-68 is more likely. The turnpike historically is the primary route from the Mid-Atlantic to the Midwest.

Interstate 76 was commissioned in 1963. Originating at Downtown Pittsburgh, I-76 followed the Penn-Lincoln Parkway East through to the Pennsylvania Turnpike at Monroeville. The route replaced what was Interstate 80S from Monroeville east to Philadelphia. I-80S remained along the Turnpike northwest to Youngstown, Ohio.

Interstate 79 is the primary north-south route in western Pennsylvania. Generally, the freeway follows U.S. 19, but while U.S. 19 enters Pittsburgh, I- 79 bypasses it to the west. Through western Allegheny County, I-79 winds northward through South Fayette township and the borough of Bridgeville. The freeway expands to six lanes north from PA 50 (Exit 54), with commuter traveling swelling traffic counts to 94,000 as recorded by Penndot in 2016.

Making a number of S-curves, I-79 proceeds north through the Collier township by the boroughs of Heidelberg and Carnegie. A modified cloverstack interchange follows with Interstate 376 & U.S. 22-30 (Penn-Lincoln Parkway West) near Pennsbury Village. Usually referred to as simply Parkway West, the freeway taking I-376 east into Pittsburgh was previously I-279 and part of the original planned alignment for I-79.

Northward into Robinson township, Interstate 79 reduces to four overall lanes. Still well used by commuters with 65,000 vpd recorded in 2016, the freeway crosses paths with PA 60 at Moon Run and continues north with a forested median between an array of subdivisions along the Kennedy township line.

Navigating through a valley fed by Kilbuck Run, I-79 advances north through Aleppo township, Sewickley Hills and portions of Ohio township. Interstate 279 converges with the freeway in the borough of Franklin Park, with I-79 widening to six lanes and 2016 traffic counts reaching 100,000 vpd. The six-lane section extends north to U.S. 19 (Perry Highway) in Marshall township. I-79 meets the PA Turnpike nearby and the crosses the Butler County line.

Interstate 279 branches southeast from I-79 at Franklin Park along a suburban course to Ohio township, Ross township and West View. The freeway travels 13.3 miles overall, entering north Pittsburgh along the Parkway North and concluding at the Fort Pitt Bridge taking Interstate 376 across the Monongahela River between Parkway West and Parkway East. An HOV-express lane accompanies Parkway North from I-579 (Veterans Bridge) to U.S. 19 near West View.

Historically Interstate 279 was proposed as a bypass of Pittsburgh along what is now Interstate 79 from Robinson township north to Franklin Park. This changed first in 1970, with I-279 redesignated along the Fort Duquesne Bridge and the proposed Parkway North, and the Parkway West numbered as I-76. AASHTO approved a subsequent change on December 3, 1971, with I-279 extended west along Parkway West to I-79 and U.S. 22-30.

The westward extension of Interstate 376 overtook all of I-279 across both the Fort Pitt Bridge and Parkway West to I-79 near Pennsbury Village. Signs for I-279 along Parkway West were removed in 2009.

Prior to 2005, Interstate 376 originated from the east end of the Fort Pitt Bridge at Downtown Pittsburgh and lined Penn-Lincoln Parkway East east along side U.S. 22 to the Pennsylvania Turnpike at Monroeville. The Parkway East opened in stages between 1953 and 1959, with the link to the PA Turnpike finished in 1962. The urban freeway passes through the Squirrel Hill Tunnel between Exits 74 and 77. U.S. 30 also accompanies Parkway East through to Wilkinsburg.

Efforts to renumber Pennsylvania 60 (Beaver Valley Expressway) as an Interstate highway started in 1994. Legislature to add the state route into the Interstate system was introduced in 2003, and by 2005, it was made official as a Future route. With planned upgrades to bring portions of PA 60 to Interstate standards, AASHTO approved the initial extension of Interstate 376 west to I-79 on May 6, 2006. I-376 was designated northwest along the Airport and Beaver Valley Expressways in June 2009.

Constructed in the 1950s, with the Fort Pitt Tunnel opened in 1960, Penn-Lincoln Parkway East was formerly the western leg of Interstate 279. A well traveled commuter route, with up to 99,000 vpd recorded by PennDOT in 2016, Parkway West takes a winding course west from Pittsburgh through the boroughs of Green Tree, Carnegie and Rosslyn Farms. The freeway is only four lanes wide, with auxiliary lanes running between respective on and off-ramps.

Parkway West continues west from I-79 along side U.S. 22 & 30 through Collier and Robinson townships. U.S. 22 & 30 branch west at Exit 60A to Weirton, West Virginia, while I-376 shifts onto the Airport Expressway to Pittsburgh International Airport (PIT). The renumbering of PA 60 to I-376 included redesignated PA 60 Business as Business Loop I-376. The business route circles around the east side of PIT Airport, while I-376 serves the passenger terminal directly at Exit 53. The two converge in north Findlay township, with I-376 joining the Beaver Valley Expressway north to Aliquippa.

Interstate 579 forms an urban loop spurring south from I-279 (Parkway North) across the Allegheny River into Downtown Pittsburgh on the Veterans Memorial Bridge. The freeway shifts below grade along Crosstown Boulevard south from PA 380 (Bigelow Boulevard) and west of PPG Paints Arena (home of the Pittsburgh Penguins) and Duquesne University. The route ends at the Liberty Bridge spanning both I-376 and the Monogahela River south to the Liberty Tunnel. The Liberty Tunnel connects Downtown with U.S. 19 Truck & PA 51 at the Beechview and West Liberty neighborhoods south of Mount Washington.

U.S. 22 is almost entirely freeway through its passage through the Pittsburgh area, following all of the Penn-Lincoln Parkway. That name is taken from the merger of the Penn and Lincoln Highways, U.S. 22 and U.S. 30. Signed today as Interstate 376, Penn Lincoln Highway was originally built as a new alignment for U.S. 22.

U.S. 30 combines with U.S. 22 east in Findlay township, just prior to their merge with Interstate 376 along Parkway West. U.S. 30 accompanies I-376 & U.S. 22 across much of Allegheny County and the city of Pittsburgh through to Wilkinsburg. Rejoining the Lincoln Highway, U.S. 30 heads southeast through Forest Hills to North Braddock, East Pittsburgh and East McKeesport to Westmoreland County.

Pennsylvania 380 (Bigelow Boulevard) through central and east Pittsburgh represents the historic route of both U.S. 30 and the transcontinental Lincoln Highway. 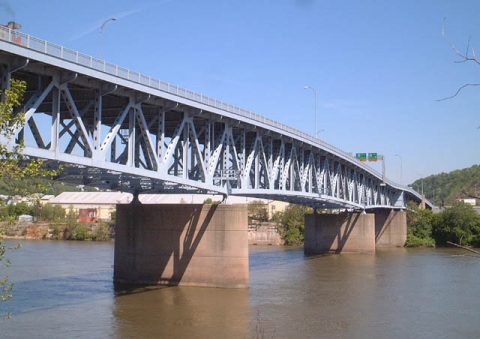 The 62nd Street Bridge is a Warren deck truss span carrying Pennsylvania 8 over the Allegheny River. Built in 1960, the bridge is 2,106 feet long at a height of 49.9 feet.

PA 8 begins at the interchange joining U.S. 30 (Lincoln Highway) west with I-376 & U.S. 22 (Parkway East) in the borough of Wilkinsburg. Starting as Ardmore Boulevard, the state route over takes Penn Avenue through Downtown Wilkinsburg and enters the eastern end of Pittsburgh at the Point Breeze neighborhood. PA 380 combines with Penn Avenue for two blocks between Dallas and 5th Avenues, as it continues Lincoln Highway west through Bakery Square and East Liberty.

Fifth Avenue leads PA 8 northeast to Washington Boulevard and the Highland Park community. Turning west along the south banks of the Allegheny River, PA 8 follows Butler Street to cross the river on the 62nd Street Bridge. PA 8 then heads due north to Butler, Franklin, Titusville and Union City. The state route concludes at U.S. 20 in Erie.

Pennsylvania 28 (Ohio Street / Allegheny Valley Expressway) is a limited access route leading from Interstate 279 in the North Shore area in a northeasterly direction toward Fox Chapel. The freeway was previously designed with substandard elements, including three instances where lane drops forced through traffic into a single lane. The exchange with Pennsylvania 8 was upgraded to add a second through lane. Exit 6 at Highland Park Bridge remains with one lane in both directions, and southbound traffic at the Freeport Road connector still reduces to a single lane. Pennsylvania 28 continues as a freeway all the way to Kittanning, 35 miles northeast of Pittsburgh.

With Interstate 376 taking over as the designation for both the Airport and Beaver Valley Expressways north from the Pittsburgh area, Pennsylvania 60 travels solely along a surface route. Heading east from the exchange joining U.S. 22 & 30 with I-376, Pennsylvania 60 winds east through Robinson township along Steubenville Pike, serving a retail area anchored by The Mall at Robinson. Continuing pass a parclo interchange with I-79 at Moon Run, Steubenville Pike curves southeast to western reches of Pittsburgh and the borough of Crafton.

Pennsylvania 60 makes a convulted route through Crafton, turning south from Steuben Street along Noble and Dismore Avenues to Crafton Boulevard east and north. The state route winds between the Crafton Heights and Westwood neighborhoods through west Pittsburgh. Main Street leads the route east through the West End to its end at I-376 and Pennsylvania 51.

Pennsylvania 380 along Bigelow and Baum Boulevards is a primary route from the east into Downtown Pittsburgh. The state route represents the original alignment of U.S. 22 and U.S. 30 through the city.

Boulevard of the Allies

Boulevard of the Allies doubles as PA 885 east to Bates Street south through South Oakland. The state route reconvenes with Parkway East and then takes a combination of 2nd and Irvine Streets south to Hazelwood and the Glenwood Bridge across the Monogahela River. An interchange ties in the south end of the span with PA 837 (Carson Street), with PA 885 continuing onto Mifflin Road. The state route exits Pittsburgh along Lebanon Road, passing through a tunnel at Allegheny County Airport (AGC) in the borough of West Mifflin.

Views of the Boulevards of the Allies from Duquesne University. Photos taken 05/25/02.

The Pittsburgh Belt System consists of six colored-coded routes overlaying a variety of state routes, arterials and streets circling the city and metropolitan area. Almost entirely located Downtown, the innermost route is the Purple Belt. The outermost loop is the Red Belt. The color pattern mimics the bands of a rainbow from interior loop to outer peripheral loop: purple, blue, green, yellow, orange and red. For a detailed breakdown of each belt route, see Jeff Kitsko’s Pittsburgh Belt System. 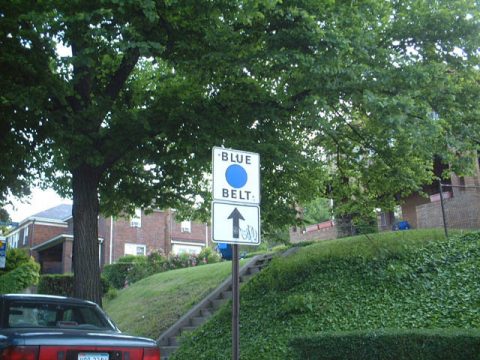 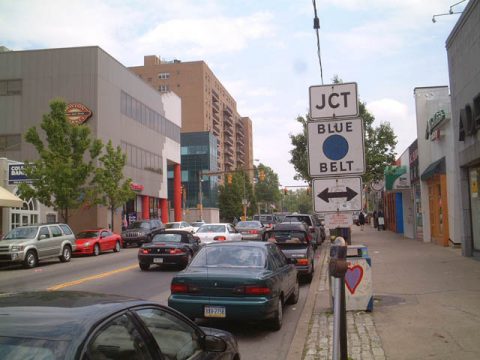 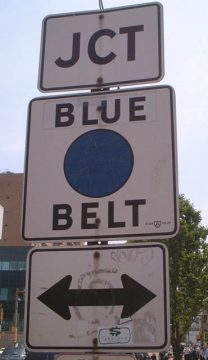