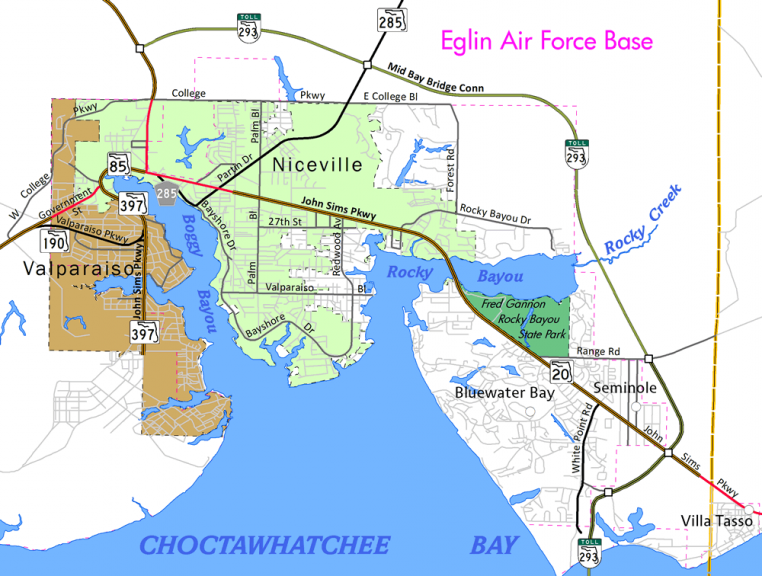 Florida State Road 293 crosses Choctawhatchee Bay along the 3.6-mile Mid-Bay Bridge between Niceville and Destin in southern Okaloosa County. The state route was designated on the bridge and its connector roadways north to SR 20 and south to U.S. 98 when the $86-million span opened in June 1993. The toll bridge is operated by the Mid-Bay Bridge Authority, which was created by state Legislature in 1986. Work on the bridge commenced in 1992.1

Tolls were initially set at $2.00 per passenger vehicle in 1993. Those increased to $2.50 per passenger car in 2004 and $3.00 in 2010. As of 2013, the Bridge Authority still had $260-million in bonds to pay off.1 Revenues from tolls collected are also paying for the Mid-Bay Bridge Connector, a limited-access expressway bypassing Niceville between SR 85 and the bridge. The first segment of that roadway opened in May 12, 2011, realigning the route away from White Point Road to a single point urban interchange (SPUI) with SR 20. A short extension followed by September 16, 2011 to a diamond interchange with Range Road on the Eglin Air Force Base border.

Work to complete the roadway northwest to SR 85, including an interchange at SR 285 and a toll collection point north of Range Road, was expected in early 2014.1 Completion projects moved faster than anticipated expediting the Mid-Bay Bridge Connector opening to January 4, 2014. A ribbon-cutting ceremony and 5K run preceded the opening.2 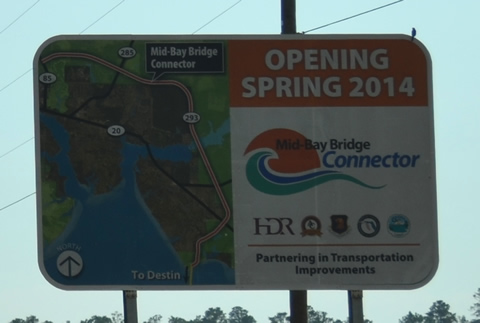 This sign advertised a Spring 2014 opening date of the Mid-bay Connector at the now trumpet interchange between SR 85 and SR 293. Long range planning calls for the Niceville bypass to continue southwesterly as part of a toll road to SR 87 near Holley. Photo taken January 25, 2013.

Construction of the Mid-Bay Bridge Connector broke ground in 2009. The $140-million project extended the limited access routing of SR 293 to 16 miles. Tolls on the Niceville bypass portion range from $1.00 per passenger vehicles with a SunPass account and $1.50 for cash transactions.3