53.74 miles in length, Georgia State Route 400 originates from Interstate 85 in northeast Atlanta and concludes where U.S. 19 joins SR 60 at SR 115 in Lumpkin County, south of Dahlanega. SR 400 is a major commuter freeway from I-85 at Pine Hills north to Buckhead in Atlanta, Roswell and Alpharetta in Fulton County, and Cumming in Forsyth County. The 7.03 mile long section of SR 400 between I-85 and the Perimeter Highway (Interstate 285) was tolled at a mainline plaza between Exits 2 and 3 until 2013. The remainder of SR 400 north from Atlanta along the North Fulton Expressway or Turner McDonald Parkway to SR 306 at Coal Mountain was built as a free route. The 30.30 mile long freeway doubles as U.S. 19.

The origins of the State Route 400 date back to a 1952 land-use plan that included an expressway paralleling Roswell Road north from Atlanta to Sandy Springs. Land acquisition for the Peachtree Connector, a four lane roadway between I-85 and Peachtree Road commenced in January 1959. Renamed as the North Fulton Expressway by 1963, the proposed route from Lenox Square in north Atlanta to north Fulton County was estimated to cost $15 million. Construction on SR 400 between I-285 and Northridge Road was finished in 1970. During that time a consulting firm recommended the route south of I-285 be a toll facility and dubbed it the North Fulton Tollway.

Neighborhood opposition followed in January 1972, leading to an Atlanta City Council vote against the route on September 23, 1975, while the following day saw approval of SR 400 by the Atlanta Regional Commission. Work meanwhile progressed on the expressway beyond the Perimeter Highway, with its total completion to SR 60 near Dahlonega in 1981.1 An 11.5 mile portion of this section was widened starting in September 1985. The $13.2 million contract expanded SR 400 from I-285 north to Haynes Bridge Road. Work was previously delayed from May 1984 to August 1985 due to excessively high bids received by the state for the work.2

Later referred to as the North Atlanta Parkway, the controversial alignment of SR 400 into Atlanta suffered additional setbacks and delays, including opposition from the North Buckhead Civic Association and members of City Hall. Designs for the road were contested too, with Mayor Andrew Young urging scaling the freeway down to four lanes from the proposed six lane design but later supporting the Atlanta Regional Commission proposed feasibility study for an eight lane parkway. Money for the project was derived from the defunct Interstate 420 on Southside Atlanta, totaling between $123 and $145 million in federal funds.3 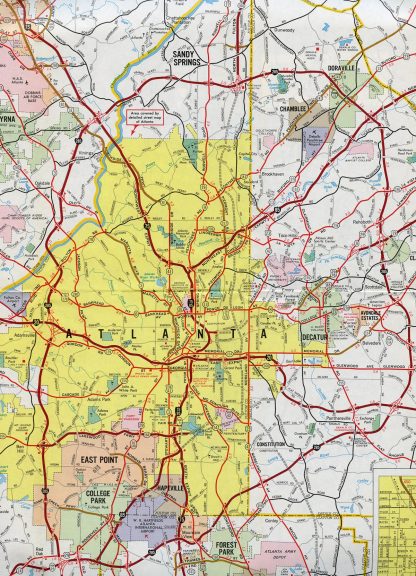 Earlier plans for SR 400 involved a freeway stretching southward to I-75 at Stockbridge along what is today Interstate 675. The middle portion was also incorporated into an unconstructed version of Interstate 485 looping east from Downtown to Inman Park and north through Virginia Highland and Morningside to I-85. 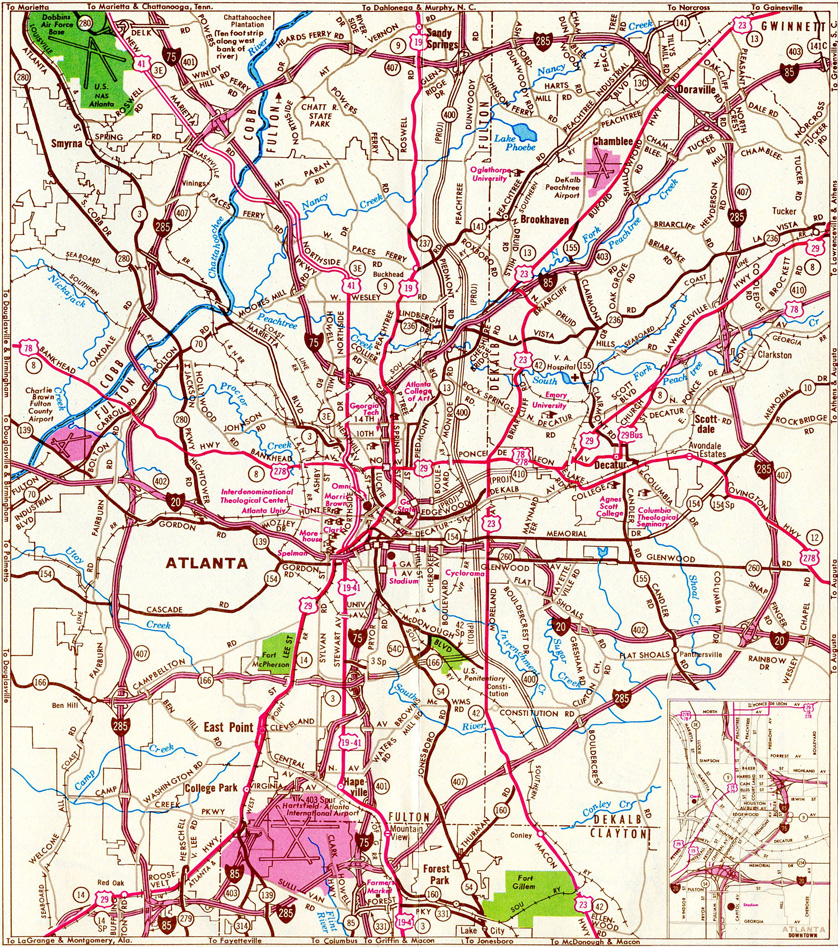 Delays in the SR 400 freeway between I-85 and I-285 resulted in a $120 million funding gap. This led to a DOT proposal to construct the $267 million six lane roadway as a toll facility. The 20 year toll schedule called for 25 cents per car for the first ten years and 50 cents for the second ten year period.4 Funding issues however continued to plague the project, with a Circuit Court of Appeals ruling in July 1987 affecting the use of $107 million in funds originally reserved for I-420 to be applied to the SR 400 project.5 One month later, GDOT asked the General Assembly to make up a $15 million shortfall coupled with a 50 cent toll proposal leading to $86 million in revenue versus the previously anticipated $60 million. MARTA, which designed a heavy rail line along the GA 400 median, increased their contribution from $40 to $60 million as well.6 Contention for the road continued through 1988, but GDOT still opened bids on the 6.2 mile road on October 21, 1988, with a a $4 million contract to construct a bridge for Peachtree Road over the future SR 400 (work eventually started on this element of work in November 19891).7 This however was blocked by a North Buckhead Civic Association lawsuit when a judge ruled that the city of Atlanta had not given approval for the project as required by law on January 19, 1989.8 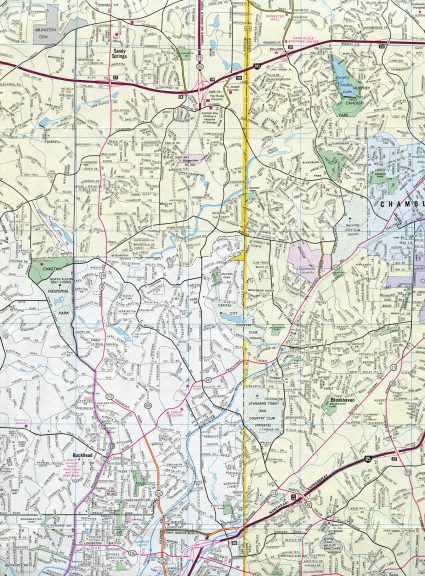 The Georgia House approved legislation on February 21, 1989 to remedy the court ruling that previously blocked construction on SR 400. The measure passed 139-18 with Atlanta legislators comprising the bulk of opposition. Despite objections from Atlanta City Council and the Georgia Municipal Association,9 the bill went onto the Senate where it was also passed. This allowed the DOT to bypass Atlanta City Council and move forward with the project under the premise that allowed limited access highways to be constructed without the consent of local governments if the road both included space for a heavy rail line and received approval from a regional planning agency. The bill was expanded on March 1, 1989 to include smaller cities beyond Atlanta that utilize bus systems and not rail.10

Work on SR 400 was still delayed due to opponents, but the Atlanta City Council voted in favor of the project 11 to 7 on May 15, 1989.11 This was followed on June 13, 1989 by a federal judge's ruling that validated the state's environmental impact statement for the project.12 Backed by the North Buckhead Civic Association, an appeal filed against the EIS however contested that habitat for the endangered red-cockaded woodpecker lied in the path of future road. A judge subsequently ruled that there was not enough proof that the species lived in the right of way in a proceeding on August 23, 1989.13

Legal opposition from the North Buckhead Civic Association progressed through 1990 as demolition work and grading was underway for the SR 400 toll road. Bids for the 4.8 mile section from Buckhead Loop, a spur from SR 400 near Lenox Square, and Interstate 285 were taken in April of that year following active construction on the road south to I-85. The civic association lawsuit this time contested that the EIS did not adequately consider a heavy rail only option for the corridor and continued to indicate that the road would lead to increased traffic, noise and air pollution.14 This too was rejected by an appeal court, as a judge cited that GDOT conducted a "close objective appraisal" of the options within the EIS. The state and U.S. Department of Transportation also responded that a rail only option was previously considered in great detail by GDOT and the Atlanta Regional Commission, but that rail alone would not adequately meet the traffic demands in north Atlanta.15

Construction of SR 400 included a 600 foot long tunnel below an 18 story office building south of Lenox Square. The tunnel was a practical solution to the project as the high rise was started in 1984 at a time when GDOT was still in the planning stages for the six-lane freeway. The tower was built directly in the path of the SR 400 extension and condemnation was not feasible at the time due to incomplete environmental impact statements and the possibility the road would never be built. $3 million in funds were paid to Robinson-Humphrey, builders of the tower, to offset added construction costs need for special concrete supports that allowed for a highway to pass under it.16

New ramps to Glenridge Connector opened on October 31, 1992 at the then-south end of SR 400. These replaced a temporary connection to Johnson Ferry Road.17 Ongoing work ran through August 1, 1993 and a 10 AM ribbon cutting ceremony for the remainder of the SR 400 toll road. Costing $270 million to build, SR 400 south of I-285 is formally named the T. Harvey Mathis Parkway, after a developer and Olympic authority chairman who was a proponent of the toll road.18

An 18 lane toll booth collected 50 cent fees in both directions for passenger cars. Additionally the Georgia Cruise Card electronic toll collection was implemented. Toll collection ran through the 20 year bond period, though Governor Sonny Perdue announced that they would continue beyond 2013 in 2010. Governor Nathan Deal announced that tolls would cease in 2013, and they did on November 22. A $3.5 million project followed in 2014 to remove the toll plaza.19

The diamond interchange with Mansell Road broke ground on September 11, 1990 after ten years of planning and design work. The $25 million project also included widening of Mansell Road to four lanes. The interchange was completed by early 1993.20