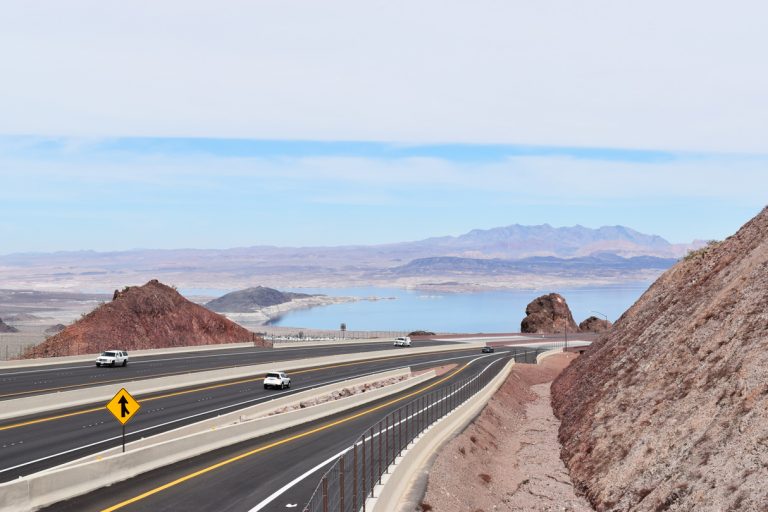 Interstate 11 is a corridor ultimately planned to run northwest from Phoenix, Arizona to Las Vegas, with a possible extension north to Reno. On July 6, 2012, the Moving Ahead for Progress in the 21st Century Act (MAP-21) officially mandated Interstate 11 as a future route to the Interstate Highway System per Section 1104. The route will overlay U.S. 93 northwest from Kingman, Arizona to the Mike O'Callaghan - Pat Tillman Memorial Bridge over the Colorado River. The I-11 corridor overtakes U.S. 93 west from the Hoover Dam Bypass to Boulder, and Interstate 515 through Henderson. 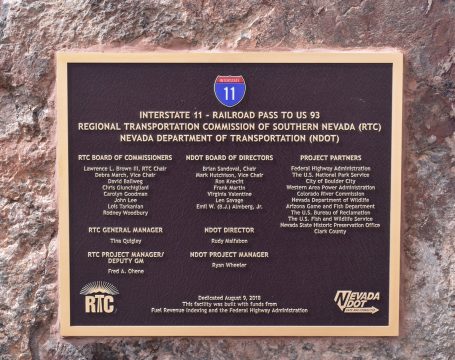 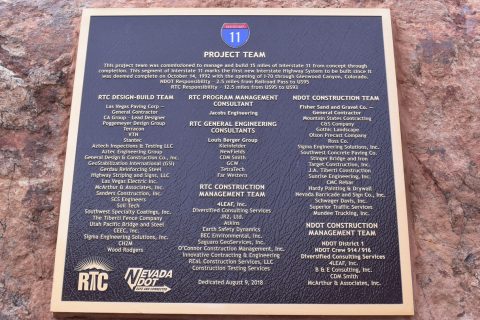 Placard dedicated to the construction teams and consultants for the I-11 Boulder City Bypass project. 03/01/19

A two phase project underway through August 2018 constructed a 15 mile section of Interstate 11 around the south side of Boulder City. Phase 1, extending 2.5 miles south from the I-515 freeway end, upgraded a portion of U.S. 93/95 across Railroad Pass to limited access standards. Costing $83 million, the Nevada Department of Transportation (NDOT) project included a new diamond interchange at Railroad Pass.1

A 2.5 mile section of the new southbound lanes at Railroad Pass opened on August 15, 2017.2 This included a 600 foot long flyover.1 Work continued on the northbound lanes between the interchange with U.S. 95 and Foothills Drive in Henderson to January 27, 2018.3 Following the completion, sign changes were to be made renumbering I-515 south from I-215 to Railroad Pass as Interstate 11. Work finally commenced March 17, 2019 to install new overhead and stand alone signs for I-11 between the Henderson spaghetti bowl and Boulder City5. The $160,000 sign project will replace 75 signs all together to reflect the switch from Interstate 515 to I-11. 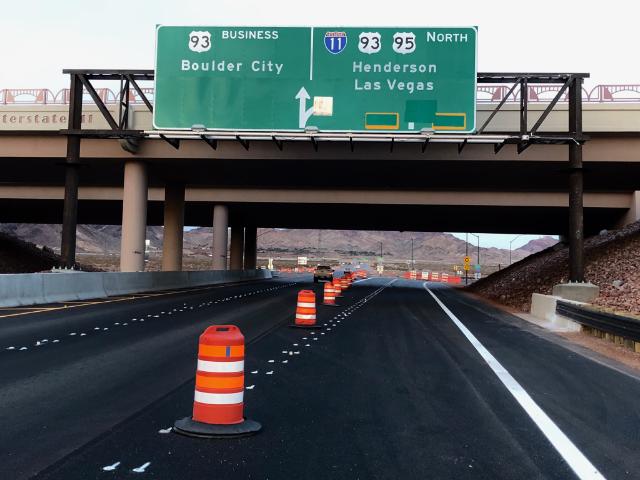 The Regional Transportation Commission of Southern Nevada developed Phase 2 of the Boulder City Bypass. The 12.5 mile, $235 million project3 loops Interstate 11 south of Boulder City Municipal Airport (BVU) and east into the El Dorado Mountains, where it rejoins U.S. 93 at the interchange with SR 172 to Hoover Dam. Work on Phase 2 started in January 2015. It included completion of the interchange with U.S. 95 as it leads south from Boulder City to Searchlight, a scenic view parking area, and redesign of the exit with SR 172 (old U.S. 93). An official ribbon cutting ceremony was held mid-morning August 9, 2018 signalizing the completion of the bypass.4

South from Boulder City, U.S. 95 was expanded to a four lane expressway from its separation with U.S. 93 south to the California State Line by 2009. A parclo interchange joins the US highway with Interstate 11. Northwest of Downtown Las Vegas, the U.S. 95 freeway may become a part of Interstate 11, depending upon the corridor ultimately selected for its continuation to I-15. Guide signs installed at the Centennial Bowl Interchange with CC-215 include greenouts covering shields for I-11. 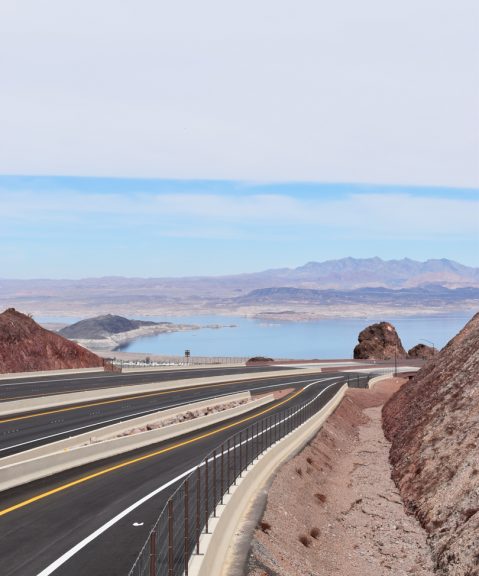 A principal component of Interstate 11 is the Mike O'Callaghan - Pat Tillman Memorial Bridge taking U.S. 93 across the Colorado River and Black Canyon to the south of Hoover Dam. Construction on the nearly 2,000-foot long four-lane bridge, with a 1,060-foot twin-rib concrete arch, began in late January 2005. The span opened to traffic on October 19, 2010. It includes a pedestrian walkway along the north side, offering visitors unparalleled views of Hoover Dam. The Hoover Dam bypass is 3.4 miles long, with interchanges at Nevada 172 (old U.S. 93 to Hoover Dam) to the west and Kingman Wash Access Road (old U.S. 93) to the east.

Interstate 11 replaced I-515 alongside U.S. 93/95 northwest from Railroad Pass to Henderson and the east end of I-215 (Bruce Woodbury Beltway). North from there, three corridors are under consideration. The western proposal overtakes Interstate 215 to I-15 near Paradise. The central proposal continues along I-515 northwest to Downtown Las Vegas and I-15 at the Spaghetti Bowl interchange. The eastern proposal involves a new terrain route, wrapping around northeast Las Vegas to Interstate 15 near the north end of the Bruce Woodbury Beltway (CC-215). A $5.3 million traffic study underway through Spring 2018, analyzed the major freeway corridors through Las Vegas Valley and Interstate 11.1 Factors involved with planning the future route of I-11 through Las Vegas include forecast increases in truck traffic and whether or not the long range proposal to extend the corridor northwest to Reno along U.S. 95 gains traction.