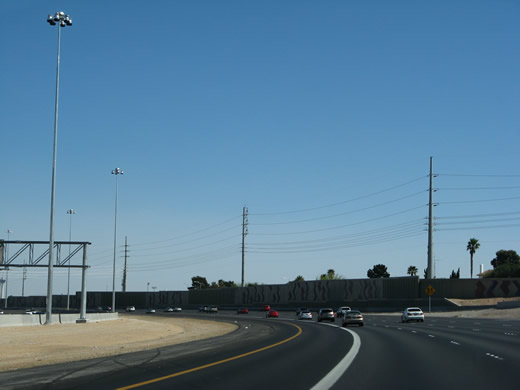 Through the city of Las Vegas, U.S. 95 is a major freeway traveling southeast from Downtown to Henderson and northwest to Kyle Canyon Road (Nevada 157). This view shows the easterly turn of U.S. 95 by the Summerlin Parkway interchange (Exit 81). 03/29/08

U.S. 95 (Bonanza Highway) runs from San Luis, Arizona, north to Eastport, Idaho, connecting Mexico with Canada. Within Nevada, U.S. 95 is mostly a two lane, rural highway except in the vicinity of Las Vegas, and where it overlaps with Interstate 80 in Northern Nevada. Through the Las Vegas metro area, U.S. 95 overlaps with Interstate 11 and U.S. 93 northwest from the Boulder City Bypass through Railroad Pass, and onto the Oran K. Gragson Freeway to Henderson. I-11 ends at the Henderson Bowl Interchange with I-215, while U.S. 93/95 continue north from Henderson to Downtown Las Vegas alongside Interstate 515. Beyond the Spaghetti Bowl interchange with Interstate 15, where I-515 ends and U.S. 93 turns north, U.S. 95 continues west along the Oran K. Gragson Freeway to Summerlin and north to leave the city through the Snow Mountain Indian Reservation.

Heading northwest from Las Vegas, U.S. 95 continues with four lanes to Indian Springs and the Nevada Test Site near Mercury (Exit 136). The remainder of the route north to Goldfield, Tonopah, Hawthorne and Schurz is lightly traveled with two lanes.

Northwest of Interstate 15, the U.S. 95 corridor was widened over the course of several projects between 2000 and 2007. The upgrade projects were:

The next phase of construction at the Centennial Bowl interchange commenced in 2017 on a $55 million project to add three additional ramps.1 Additional work starting by late 2017 (Phase 2B) added a general purpose lane and auxiliary lane from Durango Drive to SR 157 (Kyle Canyon Road). Running in tandem with Phase 2B was Phase 5 work to build an interchange with Kyle Canyon Road.

U.S. 95 is not one of the original 1926 U.S. routes in Nevada. Originally, it was a single state route, beginning and ending in Idaho. In 1939, U.S. 95 was extended southward from into Nevada, ending at U.S. 40 in Winnemucca. Then in 1940, U.S. 95 was lengthened further south to Blythe, California. Finally, in 1961, U.S. 95 was extended again to the international border at San Luis, Arizona, creating a transcontinental route.

The first change to the route of U.S. 95 through Las Vegas was with the completion of the Oran K. Gragson Expressway west and north from Las Vegas Boulevard in Downtown. The freeway replaced the surface alignment along Bonanza Road and Rancho Drive, with Rancho Drive redesigned as U.S. 95 Business. As new sections of the Las Vegas Expressway leading southeast to Henderson were constructed, U.S. 95 shifted onto it from parallel Boulder Highway.

Much of the U.S. 95 northwest from Las Vegas to Schurz has remained the same since the mid 1940s. Changes were made in the vicinity of Fallon and Fernley by 1962. Prior to that time, U.S. 95 north of Fallon followed U.S. 50 and U.S. 50 Alternate west to Hazen and Fernley, then followed U.S. 40 / Interstate 80 northeast to Winnemucca. The alignment north from Fallon to Interstate 80 at Exit 83 was previously designated as Nevada State Route 1A.

U.S. 95 follows the Colorado River north from San Luis, Arizona to Nevada via Yuma, Quartzsite, and Needles, California. Due to the searing heat of the Mojave Desert commonly affecting the Colorado River region, these towns occasionally make weather headlines with national high temperatures.

23 miles north from its overlap with I-40 west from Needles, U.S. 95 enters Nevada. Just after the state line, U.S. 95 meets SR 163, which represents the primary connection to Laughlin, a growing gaming community located 18.5 miles to the east. SR 163 comprises a controlled access expressway with traffic separated by a gravel or painted median across the Newberry Mountains. According to Bill Cohen, the area is so remote that most of the radio stations available in Laughlin/Bullhead are simulcast retransmissions of stations elsewhere, mostly Phoenix or Las Vegas.

By 2009, initial widening of U.S. 95 to four lanes from the state line north to Boulder City was completed. Traveling at-grade, the expressway passes through Piute Valley to Searchlight, where U.S. 95 meets SR 164. SR 164 stems west from the unincorporated community to western reaches of Piute Valley and the New York Mountains near the California state line. Searchlight otherwise is includes a handful of motorists services. Long term plans called for eventual conversion of U.S. 95 to freeway standards, which would likely include a bypass of Searchlight. Despite increasing traffic, there are no active plans to expand U.S. 95 to freeway standards south of the state line.

Joshua trees dot the landscape through this southernmost corner of Nevada, but they dwindle in number as U.S. 95 heads toward Henderson and Las Vegas. Rock outcrops and sagebrush are the normal scenery in this part of the state, along with arid mountains and ridges. Additionally an array of transmission lines cross U.S. 95 through El Dorado Valley, carrying power from hydroelectric generators along the Colorado River.

U.S. 93/95 combine for 23.2 miles northwest from Boulder City to Downtown Las Vegas. Joining Interstate 11, U.S. 93/95 navigate between the River Mountains and McCullough Range through Railroad Pass. Construction to upgrade the road to Interstate 11 included replacing the lone traffic light for a casino with an interchange.

Less than a mile from Railroad Pass, where U.S. 93/95 pass over Paradise Hills Drive, the two routes combined with Interstate 515. Work associated with the Boulder City Bypass (I-11) seamlessly linked this section of freeway with the bypass to the southeast. I-11 replaced I-515 northwest alongside U.S. 93/95 northwest through Henderson, with exit numbers using the mileposts of I-11/U.S. 93.

The Oran K. Gragson Expressway (I-515) directly overlayed the original U.S. 93/95 alignment to Exit 56 / Nevada State Drive, where it curves west away from SR 582 (Boulder Highway). Boulder Highway bee lines northwest through Henderson as the historic alignment for both U.S. 93/95 to Fremont Street, which extended the routes into Downtown Las Vegas. I-515 (Oran K. Gragson Freeway) expands to six lanes beyond the split with SR 582, angling northwest from McCullough Range toward Las Vegas.

Interstate 515 ends at the locally famous Spaghetti Bowl interchange, where I-15, U.S. 93 and U.S. 95 converge west of Downtown. Upgrades were made at this exchange by 2000, and it was reconfigured as part of an Interstate 15 reconstruction effort. Money for the project was secured for the project in the Intermodal Surface Transportation Efficiency Act of 1991, National Highway System Designation Act of 1995, and Transportation Equity for the 21st Century Act of 1998.

Beyond the Spaghetti Bowl interchange, U.S. 95 proceeds west along the Oran K. Gragson Freeway to the master planned community of Summerlin and north to exit the Las Vegas suburbs at SR 157 (Kyle Canyon Road). Continuing northwest through Las Vegas Valley, U.S. 95 passes east of Mount Charleston, one of the highest mountains in Southern Nevada. Areas east and north of the four lane highway fall within Nellis Air Force Range, with restricted access. Notably, over two thirds of Nevada is owned by the federal government, with land administered by the Bureau of Land Management (BLM) or the United States military.

U.S. 95 advances north through the desolate Amargosa Desert to Beatty, a gateway to Death Valley National Park. Much of this park lies in California, with a small corner located in Nevada. The majority of motorists using U.S. 95 through western Nevada travel from Las Vegas to Reno without stopping at the handful of small towns along the way. The connection to Reno can be made via U.S. 95 Alternate and Interstate 80, via U.S. 95 Alternate, SR 208 and U.S. 395, or via U.S. 50 Alternate and I-80, which is included in the National Highway System.

North into Esmeralda County, U.S. 95 traverses the Goldfield Hills to the partially abandoned community of Goldfield. The US highway reenters Nye County at Tonopah Summit and the community of Tonopah. U.S. 6 (Midland Trail) combines with U.S. 95 west from the Nye County seat for 40.6 miles west through Big Smoky Valley. U.S. 6 is the true loneliest road in America, especially since there are no towns of significance for several long expanses.

Through Hawthorne, U.S. 95 follows 5th and E Streets while the Truck Bypass for U.S. 95 loops around the east and north sides of town. The two US routes recombine, with U.S. 95 bee lining northwest across treeless desert toward the Wassuk Range and Walker Lake. Sagebrush remains the dominant plant life found along the highway. Snow is more common than rain in this region during the winter months.

Walker Lake arises from this desert environment rather unexpectedly. U.S. 95 hugs the west shore of the lake for nearly 14 miles. Fed by the Walker River from the north, water from the lake is used for irrigation and drinking in the more urbanized areas north of here in Washoe and Douglas Counties.

Following the Walker River north to Schurz, U.S. 95 separates with U.S. 95 Alternate, which connects to SR 208 at the mining town of Yerington and U.S. 50 at Silver Springs. U.S. 95 stays to the east by areas of Fallon Naval Air Station to the agricultural Lahontan Valley. There the route reaches Fallon, the first major town since Hawthorne.

Fallon represents the last major service stop for motorists along both U.S. 50 and U.S. 95. North of Fallon, U.S. 95 enters the desolate Forty Mile Desert and Humboldt Sinks. The route traverses bleak desert environments and barren salt flats for 32 miles before merging with Interstate 80 east by the Fallon Rest Area. U.S. 95 Alternate also returns to U.S. 95 here from Fernley, as U.S. 95 accompanies I-80 northeast for 93 miles to Lovelock and Winnemucca

Once at west Winnemucca, U.S. 95 partitions with Interstate 80 and follows Business Loop I-80 into the city center. The route turns north onto Melarkey Street toward Boise, Idaho. The remainder of U.S. 95 north from Business Loop I-80 to the Oregon state line is two lanes wide. Intersecting the highway midway along the 73.8 mile long drive to McDermitt and Oregon is SR 140. The multi state route provides a quick route to the Pacific Northwest for Northern Nevadans.