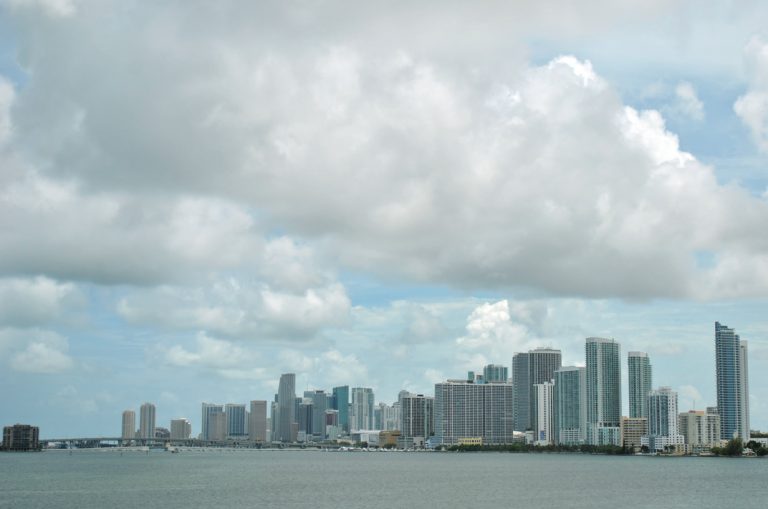 View looking south at the Miami skyline from the primary span of the Julia Tuttle Causeway along Interstate 195 east. 07/05/11

Interstate 195 is a 4.42-mile freeway spur extending from I-95 and the Airport Expressway (State Road 112) in midtown Miami to SR 907 (Alton Road) in Miami Beach. The Julia Tuttle Causeway across Biscayne Bay provides the necessary connection between the metro area and the beach city. Arthur Godfrey Road continues east from the end of I-195 at Alton Road as SR 112 to SR A1A north (Collins Avenue) one block from the Atlantic Ocean. The Airport Expressway (SR 112) continues west from I-195 and I-95 to Le Jeune Road (SR 953) and Miami International Airport (MIA).

Opened to motorists on December 12, 1959, the Julia Tuttle Causeway was the first completed section of both Interstate 195 and the Miami Expressway system as originally planned1. At a cost of $14 million2, the causeway connected U.S. 1 (Biscayne Boulevard) in midtown Miami (by way of NE 36th and 38th Streets) with Alton Road (SR 907) in Miami Beach. Named after the early pioneer who was instrumental in the creation of the city of Miami, the Julia Tuttle Causeway became the third crossing to link the two cities (following the Venetian and MacArthur Causeways).

Commenced in March 1960, the final piece of Interstate 195 opened on December 22, 1961, connecting the Julia Tuttle Causeway to the North-South (I-95) and Airport (SR 112) Expressways. With the completion of I-195 to the 36th Street Interchange, the expressway system stretched from Miami Beach across mid-Miami to the Miami International Airport.

According to the FDOT Biennial Report for 1961-62, a reference indicated that Business Spur I-195 extended along Arthur Godfrey Road toward SR A1A from Alton Road.3 The spur designation, however, did not last and was decommissioned at an unknown date.