Interstate 670 is a 3.85 mile urban loop providing a through route bypass to the south of Downtown Kansas City, Kansas and Missouri. The route provides a direct route for Interstate 70 through traffic headed west toward the Kansas Turnpike or east toward St. Louis as I-70 takes an circuitous route north along side various routes including Interstate 35, U.S. 24, U.S. 40, U.S. 71 and U.S. 169.

I-670 forms the south leg of the Alphabet Loop, a beltway encircling the Quality Hill and the Central Business District of Kansas City, Missouri. The freeway is nicknamed as such because of the exit numbering convention, where all off-ramps are assigned as Exit 2 with a lettered suffix. The numbering convention extends on all four quadrants of the loop and uses every letter of the alphabet except for I and O due to similarities with the numbers one and zero.

Signs to Interstate 670 sometimes reference Interstate 70 east to St. Louis instead, or are displayed dually as Interstate 70 Alternate. Newer sign installations give more recognition to the I-670 designation, perhaps as GPS units and smart phone navigation became more widespread. 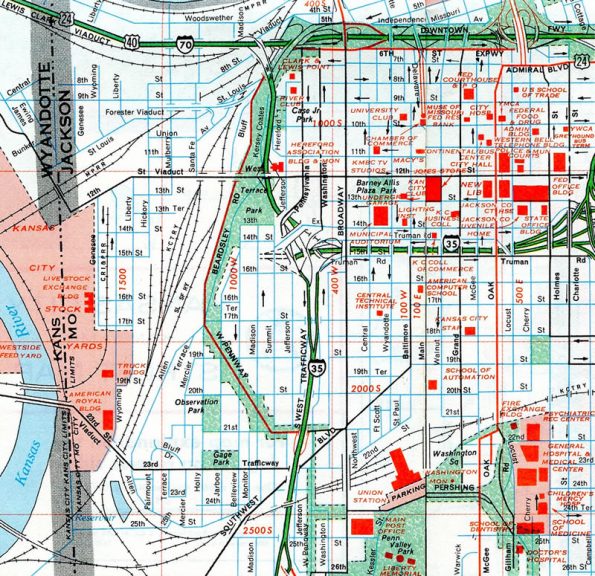 The completed Alphabet Loop in 1973, with Interstate 35 using the south leg in place of I-670.

The south leg of the Alphabet Loop was opened initially as the Crosstown Freeway, and was incorporated in the mainline of Interstate 35, with I-35 using the east leg of the loop and I-29 extending along the north and west legs. Six bridges spanning the Crosstown Freeway were built between 1961 and 1966. The route between I-35 and I-70 cost $30 million to complete. It opened initially in July 1967.1 The designation changed in 1975, with the truncation of I-29 to the northeast corner of the loop and the establishment of Interstate 670 as the sole route along the south end.

The Jay B. Dillingham Freeway portion in Kansas City, Kansas was the last section completed. It was dedicated in 19902 and cost $130 million to complete.3 Actions by the Missouri Legislature extended the freeway name east to Interstate 70 in Missouri based upon recommendations of community and municipal leaders on May 4, 1984.4 Dillingham was president of the Kansas City Stockyards Company for nearly 30 years and served as the president of Chambers of Commerce for both Kansas City, Kansas and Missouri. He was also a chairman of the Missouri Highway and Transportation Commission who helped secure federal funding for Interstates 435 and 670.5