Toll U.S. 80 provided a more direct route east to Tybee Island (Savannah Beach) through Downtown Savannah along Bay Street, General McIntosh Boulevard and President Street Extension. This alignment continued east along Island Expressway / Savannah Beach Expressway to a toll bridge across the Wilmington River between Causton Bluff and Oatland Island. Toll U.S. 80 and U.S. 80 converged at a wye interchange on Whitemarsh Island, with U.S. 80 navigating along a series of causeways and bridges across marsh land to Fort Pulaski National Monument and Tybee Island.

The Georgia Highway Department initially sought to designate U.S. 80 Alternate along Bay Street, President Street and the Islands Expressway between Savannah and Oatland Island. The application submitted to the American Association of State Highway Officials (AASHO) included this explanation for the reuqest:

Proposed U.S. Route 80 Alternate between Savannah and Savannah Beach provides traffic with a facility constructed with Chatham County financing and meets the AASHO criteria for inclusion as an Alternate Toll Highway Facility. A Toll Bridge Facility over the Wilmington River (Atlantic Intracoastal Waterway) charges a fee of 25¢ for passenger vehicles and 50¢ for trucks, with an option purchase of 20 tokens for $3.00 for passenger vehicles. This proposed alternate is approximately 2.2 miles shorter, has 17 less traffic signals and two less 90° turns than present U.S. Route 80 between Savannah and Savannah Beach.

AASHO declined to approve U.S. 80 Alternate on July 5, 1966. Correspondence from AASHO on August 3, 1966 indicated that the U.S. Route Numbering Subcommitte and Executive Committee instead approved and suggested marking the proposed route as U.S. 80 Business, as it provided the same type of service to the traveling public. Georgia amended their request for the establishment of "Toll Highway Facility" U.S. Route 80 in Chatham County in an August 31, 1966 letter to AASHO. The designation was subsequently approved by AASHO on November 27, 1966.

Tolls on Islands Expressway were dropped in 1980.1 The span at the time consisted of a two lane, single leaf bascule bridge built in 1963.2 Fares were collected at booths east of the Wilmington River. 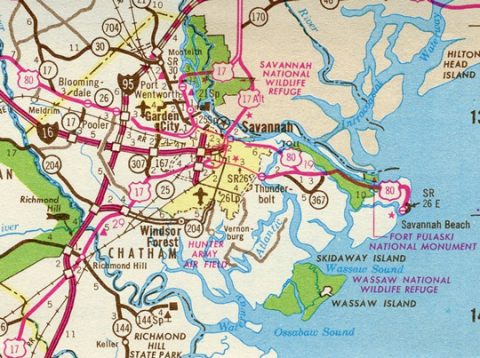 With tolls removed, the Georgia Department of Transportation (GDOT) proposed relocating U.S. 80 onto Islands Expressway over what was U.S. 80 Toll. U.S. 80 followed the couplet of Broad and Montgomery Streets south from Bay Street to Victory Drive, and Victory Drive east to Thunderbolt and White Marsh Island at the time. The American Association of State Highway and Transportation Officials (AASHTO) concurred with this request on June 26, 1981. However, U.S. 80 would remain south of Downtown Savannah along Victory Drive through Midtown, and along the alignment east to Thunderbolt and White Marsh Island:

Plans to add President Street and Islands Boulevard to Georgia's State Highway System have been suspended. This route (Approved by AASHTO) in June, 1981 (as a relocation for U.S. 80) will remain a local road under County jurisdiction for the foreseeable future. Improvement projects are now planned for sections of Georgia State Route 26 (old U.S. 80) from Thunderbolt easterly to Saffold Field (colored in green on the sketch map) to provide a better, higher traffic capacity route. Therefore, we request U.S. 80 be relocated back to its previous alignment shown in green on the sketch map.

The subsequent application for the relocation of U.S. 80 was approved by AASHTO on June 29, 1982.

Four lane expansion of Islands Expressway (County Route 787) included the addition of a second bridge over the Wilmington River. Rather than construct a new crossing, crews moved the existing draw bridge for U.S. 80 at Thunderbolt northward for use at Oatland Island. With construction underway by 1987, the U.S. 80 crossing was replaced with a fixed, high level bridge.1

The aging Sam Varnedoe Bridge carrying the Islands Expressway across the Wilmington River was replaced with a new high level bridge. The Island's Expressway Bridge Replacement Project started with land acquisition on the east side of the river in 2015.3 The Georgia Department of Transportation (GDOT) issued a Notice to Proceed for construction on the pair of 1,970 foot long bridges on February 2, 2018. The eastbound span is 36 feet wide with two 12 foot wide travel lanes; the westbound bridge has a 43.58 foot wide deck, with two 12 foot wide travel lanes. Formal plans for the new Intracoastal Waterway crossing originated in 2005.4