Since our friends decided to leave early, we followed suit and made a day out of it on the way back south.

Decided on Interstate 89 south to check out the Barre Connectors first, both of which appear as freeways on maps sometimes, but really are expressway-like roads with no private driveways. Vermont 62 spurs east from Exit 7 into northern Barre, complete with a connector leading to U.S. 302. The connector splits with Vermont 62 via a partial interchange north of the signalized intersection with Fisher and Airport Roads. The road otherwise ends at a traffic light with the U.S. 302 junction at Vermont 14. 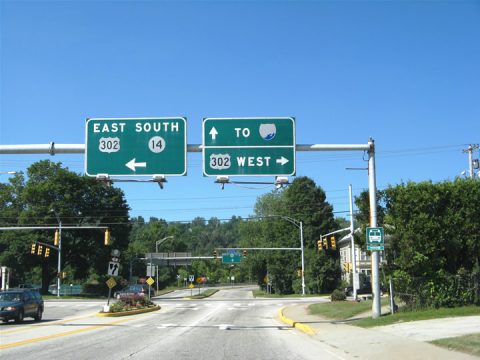 Further south, Vermont 63 spurs east from the trumpet interchange (Exit 6) to Vermont 14 at South Barre. This connector carries less traffic and has only two at-grade intersections. Both connectors see end shields on the southbound Interstate 89 on-ramps. 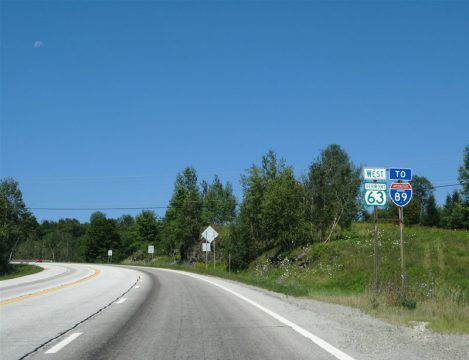 Vermont 63 travels a less busy route between Vermont 14 (South Barre Road) and Interstate 89 (Exit 6). Unlike Vermont 62 to the north, Vermont 63 sees no traffic signals (just a set of flashers at Miller Road). This shield assembly and Interstate 89 trailblazer lies west of that intersection.

Continuing southward, we took Interstate 91 to Brattleboro where we encountered a construction induced traffic jam prompting us to depart the freeway for parallel U.S. 5. While along the route, we discovered an original 18×24″ Interstate 91 Vermont trailblazer along northbound. Also the day we were there saw a parade or some sort in downtown, prompting yet another detour for Vermont 9 west to Bennington.

As mentioned before, Interstate 91 provides a scenic and rustic ride through Vermont’s Connecticut River Valley between Massachusetts and St. Johnsberry. 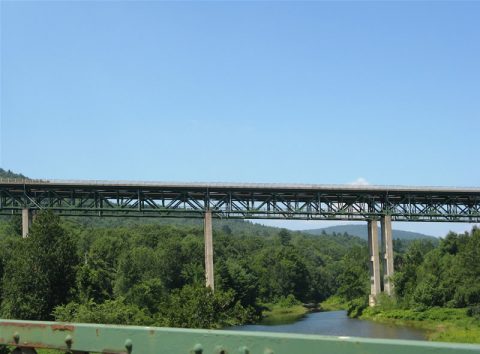 Several high-level bridges pass above tributaries leading into the Connecticut, such as this span over the Williams River. Photo looks west from the parallel U.S. 5 Williams River bridge.

U.S. 5 and Vermont 9 merge at a roundabout east of the trumpet interchange (Exit 3) with Interstate 91. Vermont 9 enters the Brattleboro area as New Hampshire 9 from Keene. 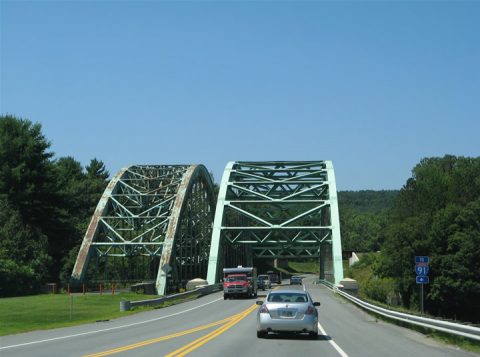 Vermont 9 carried us westward across the mountains into the southwest Vermont town of Bennington. The state route travels a narrow and slow moving corridor through town, intersect U.S. 7 in the process. U.S. 7 travels a freeway that dumps traffic right into downtown. A bypass for one or both of the routes is needed too. 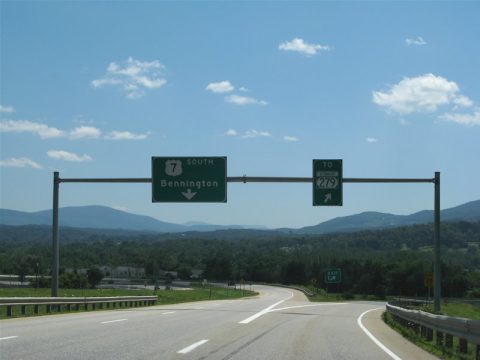 U.S. 7 southbound at the trumpet interchange (Exit 1) with Vermont 279. Vermont 279 spurs westward, meeting Vermont 67A via a folded-diamond interchange nearby. Historic Vermont 7A also travels nearby on a parallel alignment to U.S. 7. Access to that route is provided directly at U.S. 7 across from Kocher Drive or from U.S. 7 Exit 2. The shield includes the banner “Historic”.

Our next stop was Albany and a tour of the area freeways. Albany is represents several opportunities for road exploration with many partially built freeways and cancelled projects. First on our list of things to investigate was the South Mall Arterial, a freeway joining the Dunn Memorial Bridge with the Governor Nelson A. Rockefeller Empire State Plaza. A portion of the freeway actually passes underneath the capital complex through a set of tunnels. This freeway otherwise links with Interstate 787 and the town of Rensselaer east of the Hudson River. Planned extensions were never built on both ends. Westward, the South Mall Arterial was to join the unconstructed Mid-Crosstown Arterial (U.S. 9) freeway from the north; eastward, the Dunn Memorial Bridge was to join the unconstructed South Mall Expressway southeast to Interstate 90. 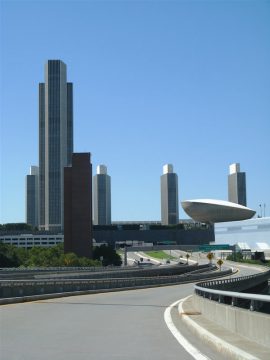 Traveling northbound on the South Mall Arterial from the massive “Circle stack” interchange with Interstate 787. U.S. 20 travels the freeway initially before departing via the Pearl Street off-ramp onto New York 32. The freeway otherwise continues on its own to the capital complex. 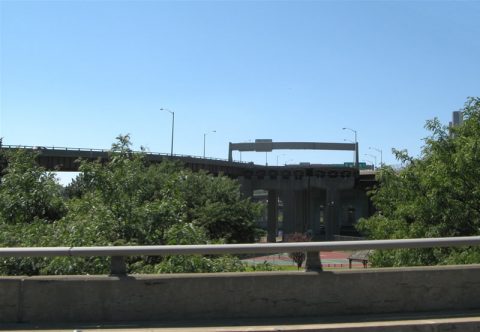 One heck of a drop off the south end of the Dunn Memorial Bridge! These stubs were built prematurely as the South Mall Expressway never reached fruition.

We poked around for an increasingly rare Interstate 787 New York shield and found two entries underneath the “circle stack” interchange complex. With that accomplished, we ventured northward and explored what was built of the Mid-Crosstown Arterial, a short freeway carrying U.S. 9 north and south from Interstate 90. That section was all that was constructed of a planned north-south freeway between the New York Thruway (Interstate 87) and Interstate 90. A four-level symmetrical stack joins the Mid-Crosstown Arterial with Interstate 90 at Exit 6. 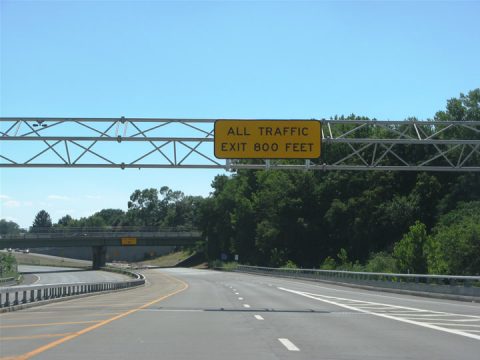 Driving south on U.S. 9, the Mid-Crosstown Arterial near the Northern Boulevard overpass. A concrete stub exists ahead for the unconstructed southward extension to the equally unbuilt North Mall Expressway (Mall Arterial). U.S. 9 continues south along Johnson Boulevard and Clinton Avenue. 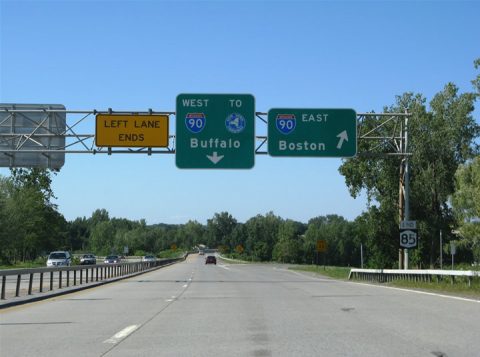 Entering the trumpet interchange with Interstate 90 along New York 85 (Crosstown Arterial) northbound. An end shield resides at the eastbound off-ramp.

Southward, road work is underway to extend the four-lane section of New York 85 across the New York Thruway onto a new bypass of the Slingerlands community. A $15.3 million project, work entails the upgrading or building of new roadway along a 1.5-mile long corridor from New York 85 west at Blessing Road to the Cherry Avenue Extension (New York 140). That is the first of two projects expected to be completed during summer 2008. A second project will extend the new four-lane New York 85 west to an existing four-lane New York 85 to the west. That project is unfunded at this time. Design elements of the initial project involves the construction of roundabouts at Blessing Road, Maher Road, and New York 140.

Speaking of Interstate 687, that route represents an unbuilt connector between Interstate 90 Exit 5A and Interstate 87 (Adirondack Northway) Exit 4. A trumpet interchange was built at the planned south end before funding dried up on the remainder of the route. Albany Shaker Road (Albany County 151) roughly parallels the Interstate 687 route today.

Another exploration stop took us to the south end of the Adirondack Northway, the unnumbered freeway spur leading south from the congested Interstate 87 & 90 directional cloverleaf interchange. The route provides ramps to Crossgates Road and a partially used interchange with U.S. 20 (Western Avenue). All I can find on the planned continuation of this freeway is a reference to the South Albany Expressway in the New York 910F (Fuller Road) article. It mentions a planned freeway paralleling Interstate 87 south from the Northway to the south end of Interstate 787.

What a great place to go roadding, Albany! See Chris Jordan’s Capital Highways for more on the Albany area roads and bridges. Much of the historical information cited here was derived from his web site.

Driving south, Interstate 87 took us to Kingston where stopped to drive Interstate 587 again and explore a few other local roads such as the U.S. 209 freeway. The work present in 2005 along Interstate 587 is done, and now construction barrels are no more along the short route. Otherwise U.S. 209 follows a freeway northeast from its junction with New York 28 west of I-587. The connection between New York 28 and Interstate 87/587 is not a full freeway however, as a traffic light with a shopping center resides between the two junctions.

Further south, construction is underway at the toll plaza adjacent to the Interstate 87 and New York 17/Future Interstate 86 interchange (Exit 16). It appears that a toll plaza expansion to accommodate open road tolling may be underway, but no project information is available online. A nearby project involves the reconstruction and upgrading of New York 17 into full freeway standards between Hancock and the Sullivan County line. Completion of that is planned for 2010.

A few other notes from the rest of the drive: Several of the older button copy signs along Interstate 78 leading west toward Pennsylvania have been replaced. Most of Pennsylvania 309’s non-freeway portions are targeted enforcement zones. It appears that PennDOT is finally upgrading the Fort Washington Expressway (Pennsylvania 309) to modern standards . For years on-ramps to the freeway greeted motorists with stop signs at the end of the ramps! Additionally the interchange between Pennsylvania 309 and Interstate 276 (Pennsylvania Turnpike) is receiving much needed upgrades!