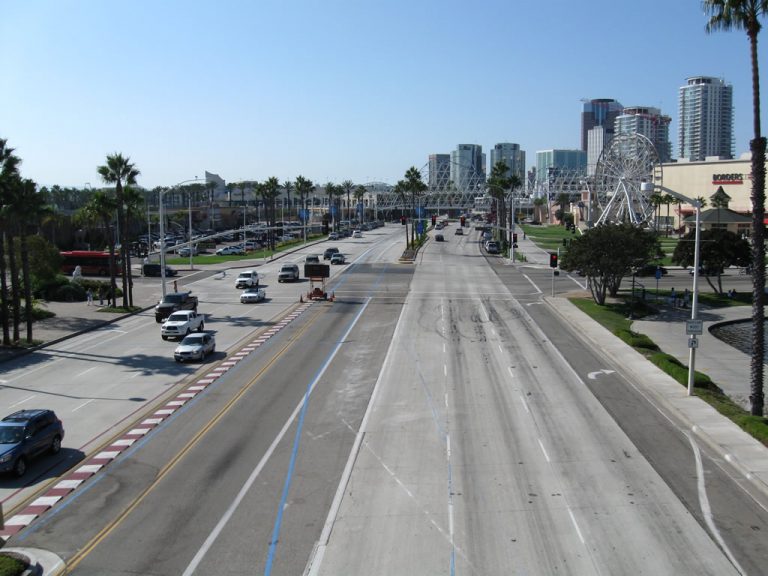 The city of Long Beach is the second largest city in Los Angeles County and is one of the most populated cities in California. Long Beach was incorporated on February 10, 1888 and then disincorporated July 24, 1896. It incorporated again on December 13, 1897. The city of Long Beach (“Many Unique Neighborhoods, One Great City”) is home to the busy Port of Long Beach, Queen Mary, Aquarium of the Pacific, and California State University at Long Beach (CSULB). The city consists of 50 square miles (excluding water acreage) and had a population of 462,257 as of the 2010 Census. A vibrant waterfront, coupled with multiple tourist attractions, makes Long Beach a popular year-round tourist attraction.

Interstate 405 is the San Diego Freeway, traveling east-west through most of Long Beach. A major regional route, Interstate 405 carries traffic from Orange County and points south into Long Beach, then proceeds north to Los Angeles International Airport (LAX) and merges with Interstate 5 near Sylmar.

California State Route 22 enters Long Beach from the east, following Seventh Street from the I-405/605 interchange complex to SR 1 (Pacific Coast Highway). Most of SR 22 within Long Beach city limits is not a freeway. The state route upgrades to a freeway east of Interstate 405, as it passes through Garden Grove, Santa Ana and Orange.

SR 47 and SR 103 follow the Terminal Island Freeway alignment from Interstate 710 (Ocean Boulevard) north to the end of the freeway at Willow Street. SR 47 departs from the freeway at the off-ramp for Anaheim Street and Henry Ford Avenue. A portion of the Terminal Island Freeway is located in Los Angeles, and the remainder is in Long Beach. State Route 47 also follows Ocean Boulevard west of the Interstate 710 interchange until passing into Los Angeles.

California State Route 91 is the Artesia Freeway. Carrying significant traffic across the northern tier of Long Beach, SR 91 also connects to Gardena to the west and Anaheim and Riverside to the east. This major freeway sees substantial use especially east of SR 55 as it travels up the Santa Ana Canyon.

Harbor Scenic Drive connects Interstate 710 with the Queen Mary and Long Beach Cruise Ship terminal, all within the Port of Long Beach.

Ocean Boulevard is a major arterial that begins as part of the Interstate 710 freeway leaving the Port of Long Beach and extends east across the Los Angeles River and through Downtown Long Beach. Past Alamitos Beach and Junipero Beach, Ocean Boulevard continues east into Belmont Shore to a dead end at Alamitos Park, near the outlet of the San Gabriel River. This picturesque and beautiful road defines the coast of Long Beach and connects to many of the Downtown and beach attractions.

Originating at the intersection of Ocean Boulevard and Alamitos Avenue east of Downtown Long Beach, Shoreline Drive loops southwest toward Rainbow Harbor, then west to the Los Angeles River. Paralleling the river, Shoreline Drive forms part of the Downtown spur expressway to Interstate 710.