SR 48 travels seven miles northwest from LOMA in Wilmington to Hockessin in northern New Castle County. Paired with MSR 41 northwest to Gap, and U.S. 30 (Lincoln Highway) west from there, the state route provides the first leg of a route linking Wilmington with Lancaster, Pennsylvania.

Exiting Wilmington west of the Greenhill neighborhood, SR 48 (Lancaster Pike) combines with SR 100 from North Dupont Road to SR 141, where an interchange was once planned. Lancaster Pike advances beyond SR 100 and 141 with four lanes to Hercules Road, and with two lanes from there to end at a wye intersection with SR 41 (Newport Gap Pike).

The high speed ramps linking Martin Luther King, Jr. Boulevard westbound, from both Downtown Wilmington and SR 48, were constructed in 1978 during reconstruction of Interstate 95 on the Wilmington Viaduct.1 Flyovers pass over SR 48 at Adams Street, complimenting the street level on-ramps from 2nd Street west and Jackson Street south of Lancaster Avenue.

Scheduled to begin in Spring 2021, the two year Wilmington Viaduct Project replaces the decks of the elevated roadway taking I-95 south from SR 9 (4th Street) to I-495 by the Christina River. Initial work on the project got underway in Spring 2020 with the closure of the entrance ramp from SR 48 to I-95 south.

With an expected surge in traffic along U.S. 13 Business north into the city, an interim project focused on improving the traffic pattern along Walnut Street between Front Street (SR 48) and 4th Street (SR 9). The east end of SR 48 was reconfigured from a split between Front Street east to the Wilmington Train Station, and a sweeping curve north onto Walnut Street after 2nd Street. Construction completed in Fall 2019 removed the sweep and expanded Front Street by two lanes to accommodate the increase in traffic to U.S. 13 Business north.

Historically SR 48 formed a multi state route with New Jersey Route 48 via the Wilmington-Penns Grove Ferry. Route 48 combined with U.S. 40 from Pennsville Auburn Road to Atlantic City along what was previously designated as New Jersey Route 18S. SR 48 appeared on the 1937 Official Delaware Highway Map, from SR 41 near Hockessin southeast to ferry landing at the mouth of the Christina River. The state route lined Christina Avenue northwest from what is now the Port of Wilmington to the Heald Street Bridge. West from the Christiana River, SR 48 traveled on 4th Street to SR 2 (Union Street), where it dog legged south to Lancaster Avenue. 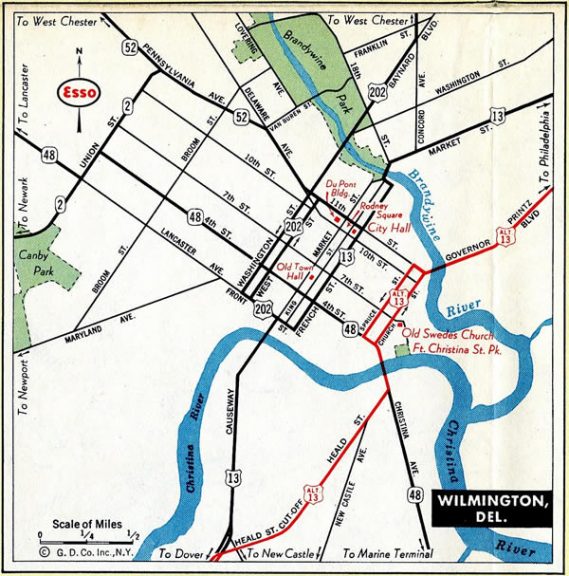 The 1964 Official Delaware Highway Map shows the couplet along Front Street east and 2nd Street west in place between Jackson Street and U.S. 13 & 202 north along Walnut Street. Completion of Interstate 95 north to Maryland Avenue, and south from 2nd and Front Streets in 1965, coincided with the relocation of SR 48 westbound along 2nd Street to SR 2 (Union Street), and the conversion of Lancaster Avenue into a one way street eastbound.