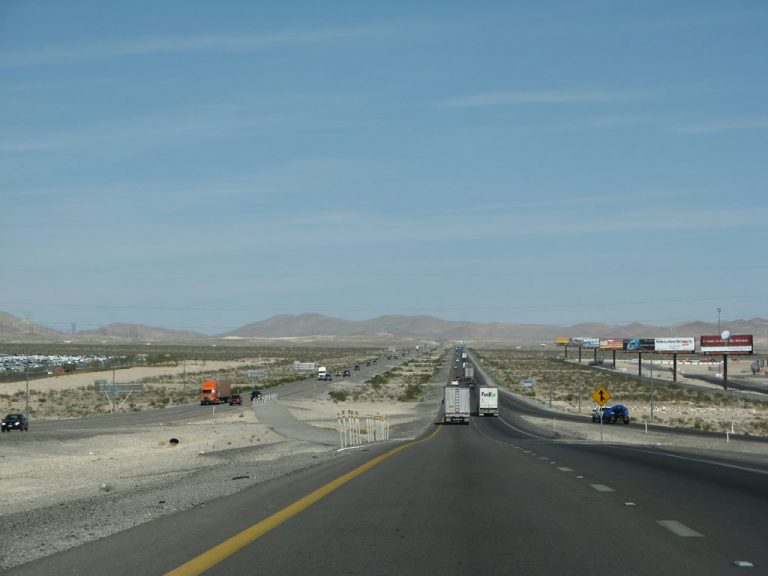 Beyond Nevada State Route 573 (Craig Road) in North Las Vegas, I-15 reduces back to four lanes. The freeway exits the urban area beyond Las Vegas Motor Speedway, transitioning to open desert and barren hills to Moapa and Mesquite. Throughout Nevada, I-15 replaced U.S. 91/466 north to Las Vegas, and U.S. 91 north to Virgin River Gorge in Arizona. U.S. 93 accompanies I-15 from Downtown Las Vegas to Garnet (Exit 64).

Crossing into the Silver State, Interstate 15 travels through the unincorporated community of Primm. Primm is notable for being the first resorts and casino seen on northbound Interstate 15 in the Mojave Desert. A towering roller coaster, and the first nighttime illumination since leaving Baker, differentiates Primm from the surrounding desert.

Primm was known as Stateline for a time, but was given the name Primm to avoid confusion with the other Stateline located at the California-Nevada boundary along U.S. 50 on the south shore of Lake Tahoe. It is a short jaunt from Primm to Jean, another roadside gaming community. Jean marks the midway point between Primm and the southern outskirts of greater Las Vegas.

Interstate 15 between Primm and Las Vegas has seen tremendous growth along with the traffic demands of the roadway. By the end of 2002, I-15 had been expanded to six lanes for the entire distance from Primm to Las Vegas, even though the freeway in California remained with just four lanes by that time. Plans remain for eventual six-laning of Interstate 15, from Primm southwest to Barstow, plus additional truck climbing lanes. Truck lanes are already in place for most uphill grades and some downhill grades. By 2008, Interstate 15 saw additional widening and interchange modifications, including the addition of Express Lanes. The first completed segment was just north of Interstate 215 in the vicinity of the Las Vegas Strip.

Las Vegas looms boldly in the horizon whether you are arriving by day or night. This city never sleeps - one can gamble 24 hours a day, seven days a week. Casinos are strewn throughout the city, but most are concentrated along the fabled "Strip" or in Downtown Las Vegas. The Strip actually parallels I-15 between the Fish Bowl interchange with Interstate 215 (Bruce Woodbury Beltway) and a point just south of the Downtown exits; Downtown is located near the Spaghetti Bowl interchange with I-515/U.S. 93-95 (Oran K. Gragson Freeway).

Commonly referred to as "Sin City," Las Vegas is stark in contrast to cities further north along the I-15 corridor, such as Salt Lake City and Provo in Utah, since those cities are typically connected with the Church of Jesus Christ of Latter Day Saints (LDS, or Mormon) and its pious ways. Las Vegas is an amazing city full of contrasts and extremes. The 100 degree days are tempered by the numerous waterfalls and man made lakes. Single family homes abut against casinos and gaming halls. Extravagant casinos with motif facades (such as medieval castles, Egyptian pyramids, and major cities) compare with the lesser parts of Las Vegas in need of redevelopment.

While worldwide visitors come to Las Vegas to see the Strip and its fabulous resorts, others make their home in Las Vegas and never even go to the Strip. Many Nevadans respect the fact that the casinos bring in big revenue and jobs, but they stay away from it, as they do not want it to be part of their daily lives. Of course, there are many aspiring actors, musicians, waitresses, entrepreneurs, and others who see the Las Vegas Strip as an endless land of opportunity, a place to make a living.

Interstate 15 labors through the southern outskirts of Las Vegas all the way past the Strip and Downtown to the city of North Las Vegas with increasing traffic. With incredible growth over a 30 year period in Las Vegas, the freeway saw several improvements and roadwork through the 1990s and 2000s, including the completion of Express Lanes by 2010. Supplemental freeways, such as Summerlin Parkway, Interstate 515, and the Bruce Woodbury Beltway were constructed through the 1980s, 1990s, and 2000s. These freeways are similarly well-traveled with cross-town travelers and commuters. New casino construction continues, while old ones are demolished with state-of-the-art implosion devices. Even with the Great Recession in 2008, people still flocked to greater Las Vegas.

Significant sections of Spaghetti Bowl interchange, which connects Interstate 15 with I-515 south, U.S. 93 south and U.S. 95 (Oran K. Gragson Freeway) was reconstructed during the late 1990s and early 2000s. Most construction was completed in March 2000, when then-Governor Kenny Guinn cut the ribbon on the last major ramp at the exchange, the 50-foot high flyover connecting I-15 north with Martin Luther King Boulevard. The first ramp at the three level interchange opened in Winter 1999. Other aspects of the project include:

U.S. 93 combines with Interstate 15 northward from the Spaghetti Bowl interchange into North Las Vegas. Traffic counts decrease sa the freeway progresses to the northern boundaries of the Las Vegas urban area. Beyond Las Vegas Motor Speedway, much of the land is low-altitude desert, with some Joshua Trees and abundant sagebrush all around. U.S. 93 departs the freeway at Apex and proceeds north along the Great Basin Highway to travel along the desolate yet scenic eastern spine of Nevada. Interstate 15 enters the Moapa Indian Reservation and quickly exits as it heads northeast toward Mesquite, the Virgin River Gorge, and St. George, Utah.

Mesquite is another border gambling city similar to Primm. Since there is far less traffic heading south into Nevada, Mesquite is not as overt as Primm is, but there are several casinos and gaming halls to go around.

The Mesquite city limits exit east to the Arizona state line. Through the northwestern corner of Arizona, Interstate 15 was bored through the Virgin River Gorge. Freeway construction here was the most expensive stretch of road ever built when it was completed. The Big Dig project (reconstruction of Interstates 90 and 93 in Boston) superseded I-15 in Arizona by 2007.

Aside from the small community of Littlefield, there are no additional motorist facilities on Interstate 15 until St. George, Utah, which is another study in contrasts. Southern Utah is notorious for its strong, conservative Mormon population; however, retirees from other parts of the country have retired there for its warmth and beauty year-round. Zion and Bryce Canyon National Parks, plus the beauty of the Great Basin and eventually the Wasatch Front lie northward along the I-15 corridor.