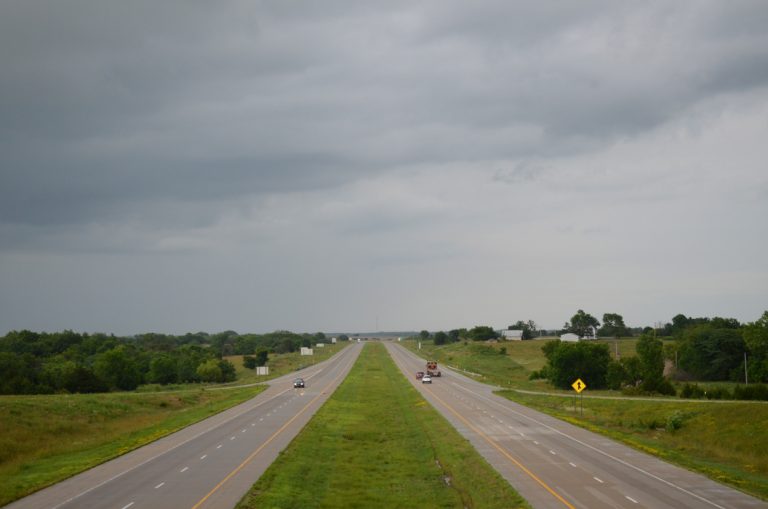 Interstate 35 overlays the southern half of the tolled Kansas Turnpike, from Sumner County (Exit 4) to U.S. 50 (Exit 127) at Emporia. The toll road connects Wichita with Topeka and Kansas City. It opened to traffic on October 26, 1956.1

East from Emporia, Interstate 35 combines with U.S. 50 along a freeway to Ottawa and the Johnson County suburbs of Kansas City. U.S. 50 joins Interstate 435 east through Overland Park, while I-35 overlaps with portions of U.S. 56, U.S. 69 and U.S. 169 between Gardiner and south Kansas City. The Turkey Creek Expressway takes I-35 into Missouri along a 1960s-built freeway.

All of the original turnpike bridges were constructed during a two year span. Salt corrosion over the intervening decades led to deterioration for many of the 345 bridges along the turnpike mainline. The Kansas Turnpike Authority (KTA) opted to sell additional bonds in 1983 to raise revenue to replace or rebuild the failing bridge decks system wide, add safety barriers between Kansas City and Topeka and make other upgrades to the toll road. Additional bonds were sold to extend the barrier project southwest in 1990.1

The Johnson County Gateway project upgraded I-35, I-435 and K-10 at their crossroads in Lenexa. Finished in December 2012, Phase 1 of the project expanded Interstate 35 by two additional lanes from 119th Street (Exit 220) in Olathe to I-435 in Kansas City. Phase 2 work further widened I-35 from I-435 north to 95th Street (Exit 224) in Lenexa between Spring and November 2015. The 95th Street exit was converted to a diverging diamond interchange (DDI) in 2016, while upgrades were made at the cloverstack interchange with the Kansas City Beltway to January 2017. Phase 3 work, currently unfunded, will add a new flyover from Interstate 35 north to a distributor roadway along I-435 west to the K-10 freeway.