Interstate 40 stretches across the width of New Mexico along a 373.53 mile course, per the NMDOT Roadway Inventory Program, from the Navajo Nation in Arizona east to Glenrio, Texas. Displacing U.S. 66 throughout the state, I-40 joins Gallup, Grants, Albuquerque, Moriarty, Santa Rosa and Tucumcari with active or former Business Loops along Historic sections of U.S. 66.

Entering the Land of Enchantment along the Puerco River, I-40 arcs northward between Manuelito and Surrender Canyons and Torrivio Mesa to the city of Gallup. Advancing east from the McKinley County seat, I-40 travels across The Hogback mountain range to Rehoboth. The freeway trends southward from Red Rocks along the north side of the former Fort Wingate Army Depot.

I-40 crosses the Continental Divide northeast of Barometer Mountain and McKenzie Ridge and proceeds southeast to Thoreau and Cibola County. Circling around Black Mesa through Milan, Interstate 40 reaches the city of Grants. The freeway turns easterly through Acoma Pueblo and Laguna Pueblo between a series of mesas to the Bernalillo County line. A gradual descent toward the dry Rio Puero ensues east ahead of Albuquerque.

Following the Coronado Freeway, I-40 shifts northward across the city of Albuquerque, bypassing Downtown to the north and meeting Interstate 25 at the Big I Interchange by the University of New Mexico. Leaving New Mexico's largest city across the Sandia Mountains, Interstate 40 navigates through a series of S-curves through Tijeras Canyon. Emerging from the canyon, the freeway bee lines southeast into Torrance County and the city of Moriarty.

The majority of I-40 across Torrance County follows a linear path. U.S. 285 crosses the freeway at Clines Corner and makes an S-curve east from there around Mesa Las Tapia. Once at the city of Santa Rosa, U.S. 54 ties into Interstate 40 from Vaughn to the southeast and U.S. 84 departs for Fort Sumner to the southeast. I-40 and U.S. 54 overlap 54 miles east to the Quay County seat of Tucumcari. San Jon lies 22 miles east from there, followed by the ghost town of Glenrio at the Texas line in 40 miles. 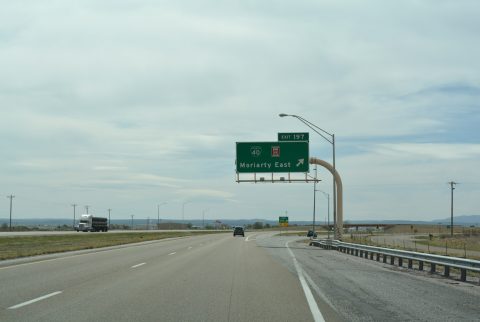