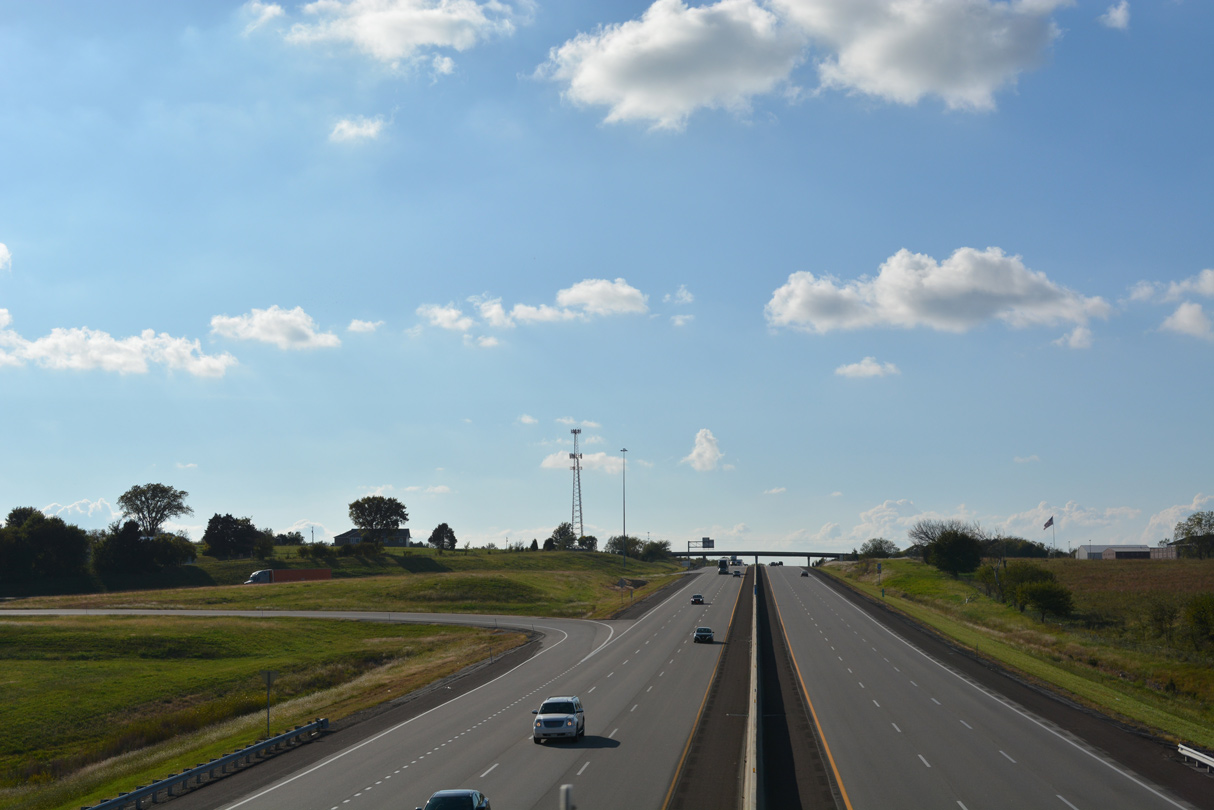 Forming part of a transcontinental trucking corridor, Interstate 70 joins the cities of Colby, Hays, Salina and Junction City across Kansas. The tolled portion of the Kansas Turnpike overlays 40.16 miles of I-70 between I-470 and U.S. 24-40-73/K-7 at Bonner Springs, serving Lawrence midway. The turnpike formally extends east along Interstate 70 to the 18th Street Expressway (Exit 420). 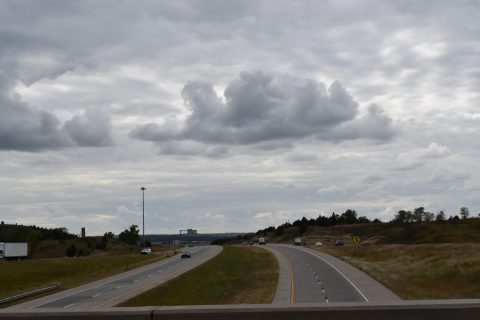 Through Downtown Topeka, I-70-U.S. 40/K-4 elevate along the Polk-Quincy Viaduct before dropping below grade between Monroe and Madison Streets. The narrow four lane bridge system curves eastward from 1st and Polk Streets to 2nd and Quincy Streets above the city street grid. Long range plans outline the replacement of the four lane Polk-Quincy Viaduct into separate bridges for east and westbound traffic.

The Polk-Quincy Viaduct Study preferred alternative also outlines a new ramp system, with split diamond interchanges outlined for Van Buren and Jackson Streets to the north and with the Monroe and Madison Street couplet to the east. 2014-15 repair work extended the lifespan of the viaduct built in the early 1960s, and additional maintenance in 2022 will keep the elevated roadway operational. Initial design work commenced in Fall 2016 and the Topeka City Council granted KDOT authority to purchase the estimated $16 million in needed right of way for the project in July 2016.1

A major project reconfigured the East Topeka interchange of the Kansas Turnpike, where Interstate 70 overtakes Interstate 335 along the toll road mainline east toward Lawrence, starting in 1997. Costing $94 million, it was one of the largest highway projects in state history at the time. Work extended the I-70 mainline east to a new wye interchange with the turnpike, replacing an access road and trumpet road system to the south. Ramps were also added to the Oakland Expressway (K-4 and U.S. 40), which ties into Interstates 70 and 335 from U.S. 24 to the north. The system interchange fully opened to traffic on August 1, 2001, with side work at the Rice Road exit from I-70 and for the removal of the old toll booths continuing until late 2002.2

A 12.69 mile section of the turnpike, between the East Topeka and Lecompton interchanges, was expanded to six lanes as part of a $108.6 million project between 2003 and May 2007.3 Construction commenced further east at Lawrence to replace the 1950s-built bridges over the Kansas River following a ground breaking ceremony held on May 22, 2008. The $140 million project initially added a new three lane bridge to the north of the original spans by late 2009. Subsequent work through 2011 removed the old bridges and built the new three-lane eastbound span.4

Ground breaking for construction of the Kansas Turnpike took place on December 31, 1954. Tolls were implemented along the Kansas Turnpike section of I-70 east to the Turner Diagonal Freeway (Exit 415) until the early 1980s, when the Eastern Terminal was relocated from a toll plaza located east of 78th Street, westward to the Bonner Springs interchange. An agreement made between the federal government and Kansas Turnpike Authority (KTA) in 1973 called for the elimination of tolls east of Bonner Springs as plans emerged to construct the interchange with Interstate 435. Bond fees for the original turnpike were paid off on October 1, 1994, coinciding with the suspension of tolls for drivers entering I-70 east from K-7 at Exit 224.5 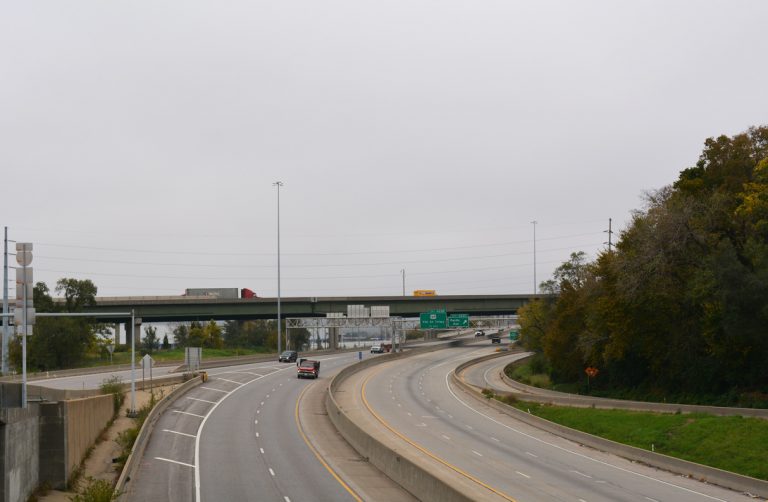 Interstate 70 travels across a series of nine bridges from Riverview in Kansas City to the Missouri state line at the West Bottoms area. Collectively the elevated roadway is named the Lewis and Clark Viaduct. The origins of the bridge network date to 1905, when a groundbreaking ceremony was held for the Intercity Viaduct, a four lane, two level deck truss bridge. The span opened in 1907 as a toll bridge.6

Tolls were dropped on the Intercity Viaduct in 1918 when the city took over control of the bridge system. Work converted the lower level to a two lane automobile deck in 1930, and the removal of streetcar lines in 1936 converted the upper deck for four lanes of traffic. The Lewis and Clark Viaduct was constructed to the north in 1962 for westbound traffic.6

The original eastbound span was formally renamed also as the Lewis and Clark Viaduct on January 25, 1969. The lower deck of the span across the Kansas River was rehabilitated for bicycle and pedestrian use in 1999-2000.6 A study was undertaken by KDOT in 2012 for the rehabilitation or replacement of the viaduct system and associated roadways.

Ultimately a $65 million project was authorized to replace a 0.58 mile long section of the Lewis and Clark Viaduct westbound. Work to demolish the existing span and erect nine plate girder spans and 11 precast girder spans got underway in early 2018.7 Delayed by heavy flooding in 2019, the new elevated roadway opened to traffic on January 23, 2021, a year later then planned.8

Phase 2 of the Lewis & Clark Viaduct reconstruction will replace the eastbound bridge. Phase 3 will add flyovers along Interstate 70 westbound over the Kansas River.8