Interstate 84, which was designated as I-80N until 1980, joins Portland and the Interstate 5 corridor with interior Oregon and Boise, Idaho. Much of the route is cosigned with U.S. 30 in the state, as the freeway replaced the original Columbia River Highway. The drive through Columbia River Gorge is arguably one of the most beautiful stretches of the Interstate highway network within the entire country.

Much of Interstate 84 is also signed as U.S. 30 along the Columbia River. The two routes continue eastward from the Umatilla Indian Reservation and climb into the Blue Mountains east of Pendleton. The freeway curves southeastward from Emigrant Hill through Deadman Pass and southward to a summit of 4,193 feet above sea level near Meacham. Along the eastward drive from Exit 216 to 224, vista points allow motorists a chance to take in the expansive nature of the western desert like horizon before the freeway leaves for La Grande. The two freeway roadways of I-84 separate by quite a distance at several intervals across the state. 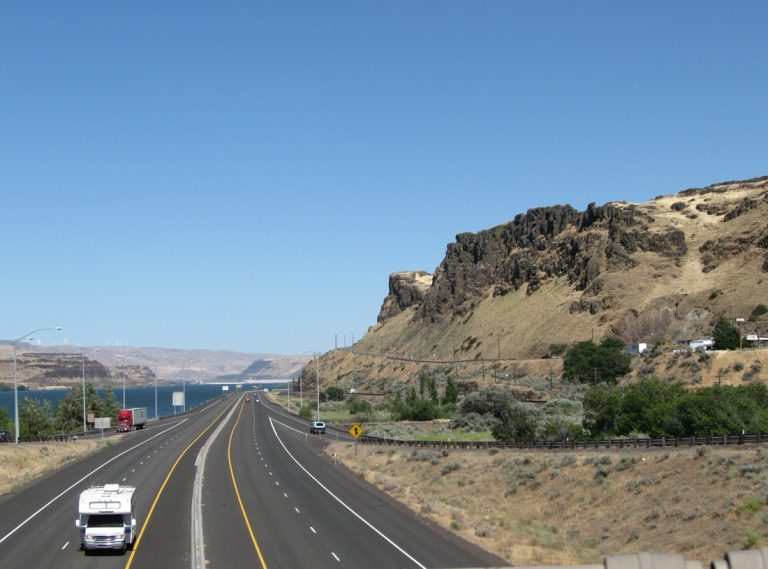 Heading west from Hood River, Interstate 84 enters the heart of the Columbia River Gorge National Scenic Area. The gorge's high bluffs keep the freeway close to the river for nearly the entire trip from Hood River to the Portland metropolitan area. Attractions along this 45 mile stretch of freeway come seemingly at every passing milepost: state parks and natural areas, historic sites (including Lewis and Clark sites), Bonneville Dam, and Multnomah Falls are just a few. As the only near sea-level break in the Cascade Range, the Gorge is also a unique area both geologically and botanically. The Columbia River and Gorge also hold a certain mystique for residents of the Pacific Northwest, perhaps best expressed by these lines from Woody Guthrie's ballad "Roll On Columbia":

Green Douglas firs where the waters cut through
Down her wild mountains and canyons she flew
Canadian Northwest to the oceans so blue
Roll on Columbia, roll on