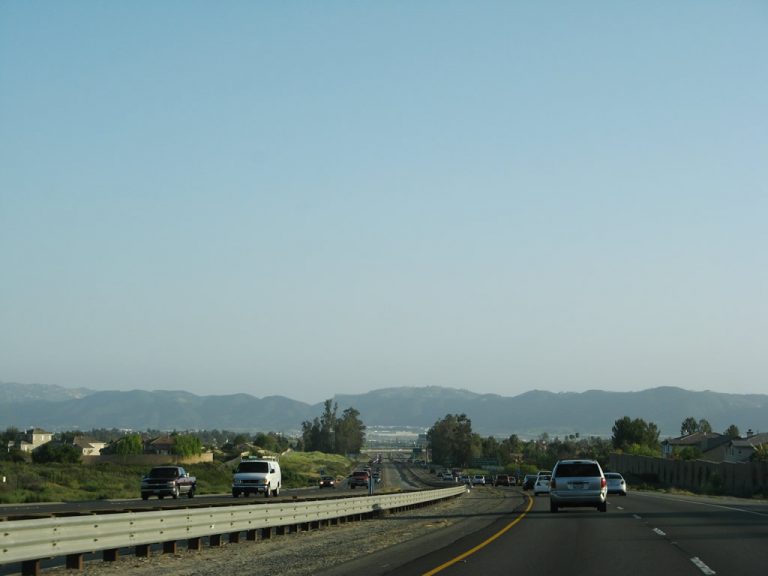 Interstate 215 travels south of Clinton Keith Road through Murrieta along a gradual descent toward Temecula. Booming growth led to expansion of the four-lane freeway south of Perris to six lanes in 2011-13. Photo taken 03/31/08.

Interstate 215 comprises a lengthy freeway loop east from I-15 between Temecula and Devore via Perris, Sun City, Riverside and San Bernardino. The section of Interstate 215 between I-15 and SR 60 was upgraded to Interstate standards in the late 1980s/early 1990s; for a time prior to this upgrade, the route was signed as California 215 southbound and to I-215 northbound. A succeeding project from February 2004 to 2009 reconstructed of the interchange joining I-215, SR 60 and SR 91 at Riverside. The upgrade added direct connect flyover ramps between the two freeways, high occupancy vehicle (HOV) lanes on the SR 60/I-215 shared alignment, and a truck bypass at the exchange.

The Interstate 215 Widening Project expanded the freeway north from I-10 to University Parkway through San Bernardino to four plus one HOV lane in each direction. Underway from January 2007 to 2013, construction eliminated left exits and added missing movements at the exchange joining I-215 with the Foothill Freeway (SR 210).

Interstate 215 is generally known by its number, but it also has specific names:

Interstate 215 was established as an Interstate Highway in 1982, replacing former Interstate 15E. The section north of Riverside was immediately signed as I-215, and the section south of California 60 was numbered as California 215. The last at-grade intersection on the California 215 expressway was bridged in 1994, bring the route up to Interstate standards. I-215 was subsequently listed as complete and fully signed.

Previous routes numbering along the I-215 freeway prior to 1982: